Willis Grimes, called “an old-fashioned gentleman who wore a beaver hat and wrapped himself in a blanket shawl, in lieu of an overcoat,” was landowner and farmer on Lebanon Road in the 1800s.

Calvin Fackler, author of “Early Days in Danville”, described Grimes in the book, but said nothing else about this man who wore a beaver hat popular of the Victorian era.

Grimes began his farm operation in 1855 on land formerly owned by the early Caldwell family.

A historic brick house built before 1868 currently serves as a visitors’ center for Wilderness Trail Distillery which sits on 22 acres of the former Grimes farm. 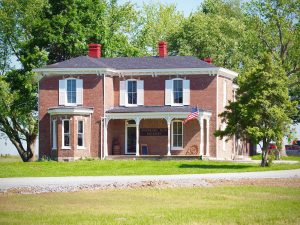 The Willis Grimes House is a visitor’s center for Wilderness Trail Distillery on Lebanon Road.

The two-story house, according to an application for the house to be placed on the National Register for Historic Places, is described as “as late Victorian: Italianate” with a stone foundation, brick exterior and metal roof. 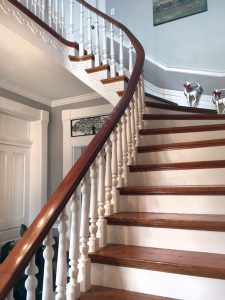 A stairway in the Willis Grimes House leads to the second floor.

Grimes purchased 111 acres of land in 1855 from Thomas Hutchinson.

A deed shows the land is on Clark’s Run, and a portion of the land conveyed by Hopkins to Hutchinson and adjoined the land of Edward Hughes and others. The land was a portion of a 703-acre tract owned by George Caldwell until his death in 1848.

Three years later Grimes purchased a second tract of 103 acres from Benjamin F. and Edna Bridges. The land had been owned by N.S. Woods until 1856 when he sold it to the Bridges couple.

The deed describes the farm as being “On Clark’s Run and Lebanon Road” (formerly the old Copeland Road ).

Grimes increased his farm to 214 aces with the 1856 purchase from Bridges.

In 1854, a year before Grimes bought the first tract of land in the county, he bought a house and lot in Danville from Thomas Coggeshall Nichols, a professor at Centre College.

After Grimes bought the Nichols house, he settled his nephew and adopted son, John Smith, in the house.

The house was on a 5-acre lot Thomas Nichols bought from Alexander Sneed in 1844. The tract was “a short distance south of the Copeland Road and Centre College, once the western extremity of Walnut Street.”

The house apparently was later destroyed in a fire.

On March 21, 1868, Grimes conveyed the trust of his land to W.W. Hill of Jefferson County, Ky., including household goods, farming equipment, six cattle, and five horses to hold in trust for his wife Mildred Jane Grimes until she wished to sell, or dispose of the property.

She was to be in control of any decisions concerning the property.

Grimes and his wife, Mildred Jane Bullard, were married, according to a marriage bond on May 28, 1825, in Oldham County. They were married 57 years when she died.

Census records show she was born about 1805 in Virginia.

In the 1860 Census, Willis and Mildred, son Hugh McKee, 19, and daughter Miriam, 9, are listed in a household in Danville.

The 1870 census lists the Grimes couple, along with Minnie, Martin Adams and Amelia, 10, and Amelia Burton, 3. They lived in Precinct 4, with a Danville post office address. Personal property was $2,000 and real estate was valued at $21,300.

The 1880 lists Willis as 75 years old and Mildred as 70 and living on Main Street, Danville. It also lists Minnie as 25 years old and Jennie, 8. Both listed as adopted. Three servants were also listed.

An 1885 Advocate-Messenger article about the marriage of Miss Minnie Grimes, (daughter of Willis Grimes and Mildred Jane Bullard Grimes of Danville) and stated J. (John) M. Turner of New Orleans and his bride were in an elegant palace car, accompanied by a large party of his friends on their wedding day.

Miss Grimes was described as “one of the favorites of Danville society, and one of the most sparkling bright ladies of Central Kentucky.

“The hold she had upon the community in which she lived was not only evidenced by the numerous elegant and costly gift-souvenirs from her friends, but by the vast crowd that impacted the church to witness the ceremony.”
The article told everything, right down to each of the gifts and who gave them:

A bronze hand-painted fan from a Mrs. Fackler; Longfellow, illustrated, from Mrs. J.L. Allen; and a plush mirror, from Mrs. J.E. Lee.

A marriage license filed in Boyle County Clerk’s office for the couple is dated March 24, 1885, with the bond sighed by J.M. Wallace. Witnesses were Herber Craft, James Lee, Fayette Dunlap.