Wayne the Boyle County llama dons many hats for 2017 calendar 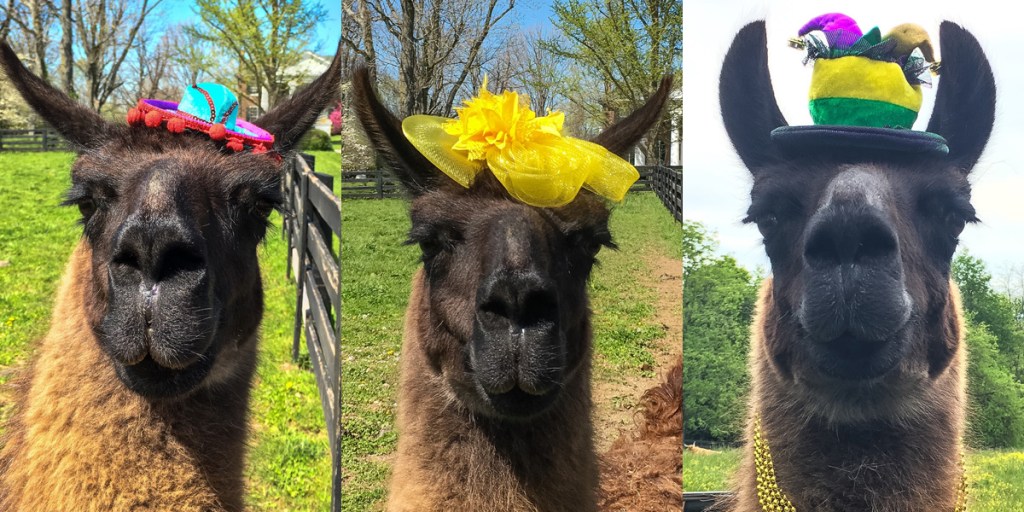 Photos contributed | Wayne the llama was photographed wearing many different hats to create a 2017 calendar featuring him as the star. The calendars are being sold to benefit the Danville-Boyle County Humane Society.

Every llama needs a hat when attending a wedding, right? That’s what Fizzy Ramsey thought, too. The day her younger brother was to marry on the family farm in Boyle County, she decided Wayne — one of the family’s beloved llamas — needed appropriate attire. The nuptials were taking place right next to his pasture but they couldn’t find anything formal for Wayne to wear, so they put a sombrero on him.

“We were surprised. He totally tolerated the hat, never shook his head or tried to rub it off like most animals would,” Ramsey says. This was just the start, she says — the start to a year of many hats, laughs and inspiration for the next calendar. 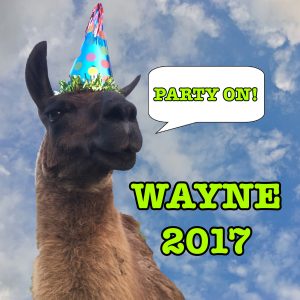 Image contributed | The cover of the 2017 “Party On Wayne” calendar features Wayne the llama in a party hat.

“I had so many requests from people wanting to purchase the photos …” and an even greater interest in the development of a calendar featuring Wayne. Ramsey’s light bulb lit up.

“So what better charity to donate proceeds to than our local Danville-Boyle County Humane Society?” Ramsey says, who is president of the board. “Wayne’s job is to protect his herd of cattle, and ours is to protect all creatures in our care. Wayne and his crew have plenty of grass and hay for the season, but DBCHS depends on its community for continued support. He’s proud to be a part of that community, even if it is just the act of a charming smile or donning a festive hat …”

She says it’s the year of the llama, with so many llama-inspired items on the market like pajamas, boxes, shirts and sweaters. “First it was elephants, then owls, finally it’s Wayne and his friends’ time to shine.” Llamas are a South American camelid, she explains, used as meat or pack animals in the Andean cultures, but they have developed a place in North America as popular livestock guards. “Or to have in social herds for fiber since their thick coat is very soft and lanolin-free.” 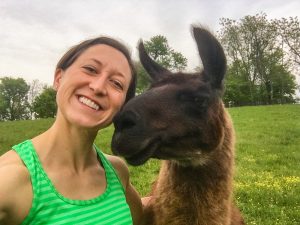 Photo contributed | Fizzy Ramsey, the creator of the “Party On Wayne” calendar, stands with star, Wayne.

Ramsey says Wayne’s sister, Sugar, isn’t the ham her brother is. She was blinded by an infection in utero, but thrives on the farm as a guardian to the lambs. “They can be very social and caring members of the farm family. Our family has been graced by many loving llamas, and we are continually amazed by their charming personalities.”

Wayne’s charming personality shines through in the calendar, as he dons a a different hat for each month. For February, he also wears gold beads for Mardi Gras, a green moustache and bowtie for St. Patty’s Day on March and a multi-colored feather boa for April’s Easter theme. In some photos, Wayne’s teeth show, making him appear to smile.

Ramsey’s parents first bought llamas more than 20 years ago for livestock guards. Wayne is nearing 16, and was born on her childhood farm, Roselawn, near Perryville. Although he’s a laid back camelid, Ramsey said he never would cooperate with her brother, the late Allen Ramsey.

“The funniest thing is he had a love-hate relationship with Wayne – he always darted out of the gate at inopportune moments and always refused to cooperate with Allen.”