Coaches gauge where their teams are so far 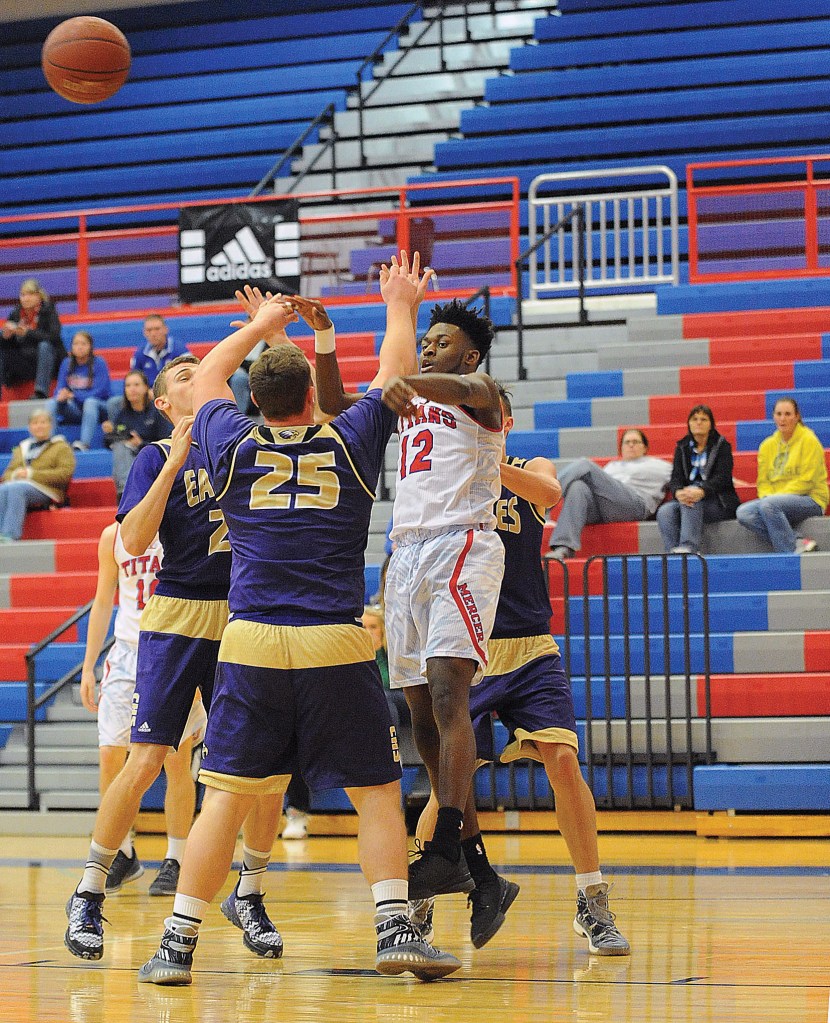 And to that point, most of the area teams have played 14 or 15 games, with the Casey County girls team checking in with 18 games finished. Oh, and about that whole cold thing, Sunday’s temperatures were in the teens.

In the first edition of a new weekly feature called Monday Mailbag, all area basketball coaches were e-mailed five questions, and what follows are their responses.

1. About midway through the season for most of you, is your team where you thought it would be at this point? If so, what has happened to make you feel that way? And if not, what does the team need to do to reach your goals?

Kurt Young, Mercer County boys coach: We are slowly progressing. Our kids are competing and starting to grasp our new system. Going forward the things that we must improve on are game preparation, focus and 3-point shooting. Overall, I am happy with our progress as the goal is to peak late in the season and we have slowly been getting better each day.

Scott Latham, Garrard County girls coach: We are behind where we should be. We have had several close losses. We must find confidence in ourselves that we can beat good teams. We must start doing two things better — shooting free throws better and taking care of the basketball, way too many turnovers.

Ed McKinney, Danville boys coach: I’m still not sure where we are. We have only one guy back with any real varsity experience, we have only had 11 days of practice with the football guys, and they are playing a majority of the minutes. Also not in the greatest of basketball condition yet. Add that to a very difficult schedule. I think the teams we have lost to are a combined 96-41 and we play a bunch of 4A and 5A schools. Not using any of that as an excuse, we just can’t get discouraged. I see some small improvements every day. Two things we need to get better at, along with a hundred more, we need to shoot it better and we need to be more competitive defensively on every possession. No give away possessions. We have to develop a collective will and compete harder. I think our football kids are at a little disadvantage because they compete hard in football and then come straight to basketball and we ask them compete hard against some really good teams. I would also add we are pretty young, starting three juniors and two sophomores. David Walker sat out all last year, so he is like a sophomore in experience. DeShaud (St.Martin) basically played freshmen last year and just improved so much over the summer and this fall in practice. He is one of the few that didn’t miss practice due to other fall sports and the work he did is paying off.

Don Irvine, Burgin boys basketball: We were coming around by playing solid basketball, good defense and taking care of the ball our last three games. Unexpected breaks in play, a key injury to Cameron Hurst, and a roster departure has put us back at square one searching for answers. Just some stability in our lineup would help us get to where we want to be, but we have nearly 20 games to play yet.

Steve Adams, Boyle County boys basketball: I believe we are where we thought we would be. Always takes us a while cause we normally get football players late and combine that with the youth and inexperience we have this year, not to mention the schedule we have played — five top-25 teams. We beat two of them, Louisville Eastern and Knox County Central.

Michael Menifee, Danville girls basketball: With the schedule we have played so far we are where I feel we should be at this point. I feel it should prepare us for the All-A tournament, district and hopefully region.

2. Looking outside your team, what player or team has been the biggest surprise to you so far this season, and why?

Kurt Young: Not having played everyone in the region yet, Noah Young (of Lincoln County) was extremely impressive to me. He is a tremendous high school player. He controls the game for Lincoln County. He is unselfish, can score, shoot it, change pace and make plays. He is an extremely tough match-up and makes Lincoln go.

Scott Latham: I think Casey County is the surprise team to me. They are a young team playing very well for coach (Tara) Weddle in a tough district and tough region.

Ed McKinney: Lincoln County is better than I thought they would be, and I thought they would be good to start with. But with coach (Jeff) Jackson and his staff, and Noah Young, I shouldn’t have underestimated them. Mercer has adjusted nicely to their coaching change. Coach (Kurt) Young had done a good job and Trevon is one of the best players in Kentucky. And he plays the game the right way. He plays hard, dives after loose balls, unselfish and can flat take over a game. And seems like a great kid!

Don Irvine: No idea. We only concentrate on ourselves but are not very pleased about where we are right now.

Steve Adams: I believe Danville is really playing well. Not sure most people would have thought that with what they lost from last season and their football team playing in the State Championship game.

Michael Menifee: Casey County has been a big surprise. They have a new coach and are having a very successful season at this point.

3. There are some long, cold bus rides in January and February. What do you do to keep yourself entertained or focused on those rides?

Kurt Young: I will close my eyes and either try to sleep or focus on our team and/or opponent.

Scott Latham: Just focus on the task at hand — that’s our team and winning basketball games — getting better everyday and preparing for the end of February.

Ed McKinney: Try to put my assistants on the bus, put them in charge and drive myself! Ha! I’ve always said if you want to coach high school sports, you ought to get on a bus, ride to Monticello on a weeknight, ride back, get in a 12:30 a.m. and get up at 6 a.m. the next morning. If you are OK with that, coaching may be your thing.

Don Irvine: I have ridden busses for very long distances to get to other small schools for 36 years. I have no answer to that question. It’s what you sign up for and what you do.

Steve Adams: Lucky for us most of our trips are close. The coaching staff talks about current events, players, other teams, etc.

Michael Menifee: On bus rides, I usually listen to music and go over the game and scouting report.

4. There will almost certainly be some cancellations or postponements in the next few weeks because of weather. How do you combat that as a coach, to keep your team in a routine and moving forward?

Kurt Young: The biggest thing that you can do is to focus on getting better. I think that if you instill in your players that you are competing against yourself every night whether it is a practice or game than they understand that the process is the most important part. We also push the development of the player with skill work each day so that if we miss a game than they feel that they are improving as players and not “missing” out.

Scott Latham: You really can’t do anything about the weather, it is what it is. You just have to keep plugging away and do what you do. You practice and play whenever you can.

Ed McKinney: You have to roll with the weather as a basketball coach. Some days you simply can’t practice, other days it’s a close call, and on the days you can get in the gym, try to make it as normal as possible. But you can’t get to uptight about it. Some days you just watch a lot of film.

Don Irvine: We have to adapt and adjust to in-game and out-of-game situations and occurrences. Weather is just another item of noise that we need to tune out. As the scripture says, “It rains on the just and the unjust,” so it snows on everyone.

Steve Adams: Weather is something you can’t control. We always talk about controlling what we can control. We try to use as a positive in that we can get extra practice time and rest.

Michael Menifee: The weather is the most frustrating thing because you have to wait on the school and others to give you permission to practice. You just try to get them in the gym and just keep them active and thinking basketball. With cell phones it is easy for kids to stay distracted and not be engaged on basketball.

5. Is there one road trip you absolutely cannot stand? What is it why? Is it because of opponent, environment, the actual travel, or something else?

Kurt Young: With this being my first time in the area, I cannot say that there is a road trip that I dread.

Scott Latham: There are some long rides still ahead. Some longer than others, I think just the thought of being on a big yellow cab for an extended period of time is the downside. Might as well make the most of it and enjoy the ride and the memories that you make with your staff and your team.

Ed McKinney: I’m not taking the bait on this one. I hate all the long away trips. I wish East Jessamine was our longest road trip. We have to go to Nicholas County later this month. No easy way to get to Carlisle!

Don Irvine: I schedule all our road trips, so they are what they are. Some sound better when you schedule them in the spring than the do when they actually arise in the winter, especially if you lose.

Steve Adams: I am going to turn this one around and talk about road trips we absolutely love. Playing at Danville and Lincoln County are so exciting. Great atmosphere great basketball. We love those games!

Michael Menifee: Western Hills is the one I dislike. The gym has an echo when you talk to your players which is so annoying it makes you not want to coach because your voice echoes when you speak instructions to your players.