People: Road to redemption — Boyle chaplain ministers to those in darkness 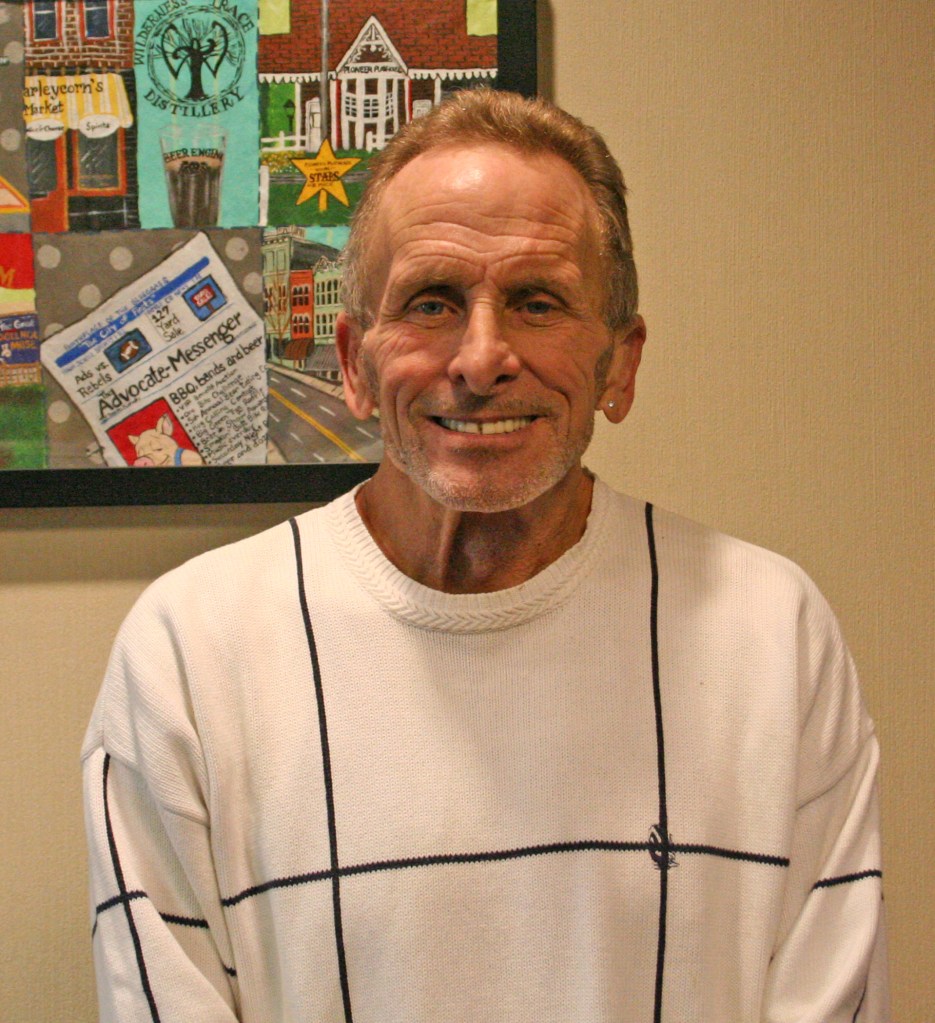 (Kendra Peek/kendra.peek@amnews.com) Tom Grugel speaks candidly about the choices in his life that led him to becoming a chaplain in detention centers.

Tom Grugel spends his days in the Boyle County Detention Center as the chaplain, ministering to those who, some might argue, need his help the most.

But he said he doesn’t deserve the glory.

“I’m really insignificant. I really am,” said Grugel, who currently lives in Mackville.

It wasn’t so long ago that he found himself on the other side of the bars, in a long journey “on the dark side,” as he says.

“Some people, I don’t know if they’re going to be smiling or take me off their contact list,” he said, referring to others’ reactions after they read about his life. “The Lord didn’t start making changes and I didn’t give him my life until 50. That was only nine years ago.”

Grugel’s journey began in Cleveland. His father battled alcoholism and, at the age of three, Grugel was placed in an orphanage, along with his brother and sister.

About 11 years later, his mom was able to regain custody of the three children.

“I grew up, not exactly a delinquent, but I was desperately seeking attention all my life. I was a class clown. I was expelled more than I was in school. I was an irritant to the teachers, to say the least. I totally rebelled because I needed that attention.”

At the age of 16, Grugel was married for the first time, to an older woman. To make ends meet, he enlisted in the United States Army.

While still in the service, Grugel and a friend “decided to rob somebody.”

“We had no particular place in mind, we just decided that, for whatever reason, we were just going to do this,” he said. They selected a shop, committed the crime and were caught.

Grugel received a 10-year sentence for first-degree armed robbery. That was his first time behind bars.

“I did four years out of those 10, and was released from LaGrange when I was 21 years old. Actually, on my 21st birthday,” he said. “What I remember, when I got out of that prison, I stood on the steps of LaGrange with nothing but a few possessions, no ride, no contacts, no job, no way to Louisville. A guard had a sympathetic heart and he took me to Louisville.”

He turned a new leaf, living “an average, everyday life.” Grugel was married again and had adopted two children and by 1980, he had launched a successful business in masonry construction.

“In a worldly way, you’d look at my life and think I was pretty successful. In that success, I began thinking I’m really too good for all those around me, including my wife. Soon, it found me in bars, as a married man, trying to play the singles scene while I was married. As you can imagine, I got my wish.”

He met a woman and began having an affair.

“That kind of relationship couldn’t produce any kind of good fruit at all,” Grugel said.

After three and half years with the woman, she left him and moved in with another woman, taking their daughter.

“That’s when I really started to go off the deep end. I felt rejected, not wanted and decided I was going to take another approach to achieve what I thought of myself.”

That led Grugel to the sex industry. He became the owner a phone-sex line, which led him to make friends with owners of nude bars, clubs and some seedy individuals. He had found his way to Florida by this point.

“The people I was meeting were those types of people, that operated in the realm of that culture. It wasn’t long after that I met other people who started showing me different criminal traits — defrauding banks, dealing in stolen property, prostituting call girls, conning,” Grugel said. “I tried to kill a man; the Lord intervened.”

He described himself as being “angry, bitter, self-loathing, held myself in contempt and riddled with guilt.”

In spite of all that, Grugel had managed to remain drug-free — until he was introduced to crack cocaine.

“I happened to take a liking to this particular drug,” he said. Within six months, he was addicted, and began turning those he knew into addicts, too.

He also became an alcoholic.

After about three years of this lifestyle, Grugel found himself facing criminal prosecution again, this time from the Federal Bureau of Investigation, the Florida Department of Law Enforcement, the local sheriff’s office and a task force aimed at catching him.

“When I was arrested, the charges kept piling up. I did eight months in jail, being arraigned three times a week, to address the continuing avalanche of charges that were associated with my activities. After eight and a half months in Hillsboro County Jail, the judge finally demanded that the prosecutor offer me a deal and we plea bargained for five and a half years,” Grugel said. He also received probation, after spending the first five and half years in a maximum security facility in Florida.

After being released, he returned to Kentucky. Grugel met his now-wife, Phyllis.

“I was still bitter, still angry, still tied up in alcoholism — although I quit the drugs. The alcoholism grasped ahold of me deeper and deeper,” he said. “I denied my alcoholism ’til my last breath. I tried every way imaginable to convince myself I wasn’t an alcoholic.”

“As you can guess, I was abusive to my wife and to my children. I was disloyal and I dishonored her and my friends in many ways. I was a lousy father, a bad husband and really a terrible friend to anybody that was around me.”

“I kept feeling drawn to something I couldn’t put into words. I would wake up from a drunk night before and on Sunday, I would suddenly feel drawn to church, any church. It didn’t make a difference. I was being compelled,” he said. “I would get up, leave my family and attend whatever church was in the area.”

This pull continued for a while, although “nothing took hold,” Grugel said.

“I got the goosebumps and I got the warm and fuzzy feeling, but I would still leave knowing something was missing. I would always leave wanting and knowing that I needed something.”

Grugel was 50 when he found a church he wanted to attend regularly. He was encouraged to go on an Emmaus Walk, a three-day experience offered to “meet Jesus Christ in a new way as God’s grace is revealed,” according to emmaus.upperroom.org. Participants have to be invited by a “sponsor,” and undergo an application process.

“Not knowing what was in store, I counted the days and months,” he said.

He had five months from the invitation until the event, which proved to be life-changing.

While at the weekend event, Grugel went to the “barn” after breakfast, waiting on more people to join him.

“I was sitting off by myself, no one else was in there, for some reason no one else had stepping into the building,” Grugel said. “I was looking at a picture of Jesus, the generic, cool-looking dude with the beard, long-haired, shiny, looking up at the sun beaming down on his face. I sat there looking at the picture and there was a candle flickering.

“The next thing I remember, I was facedown on the concrete, just feeling like the whole world, and everything in it was right upon my back and it was crushing.”

It was in that moment, Grugel said, that God showed him his life.

“All of the abuse to my parents, dishonoring them, the turning my friends on to crack cocaine, the women that I prostituted, the banks I stole from, the people I deceived and cheated … the guilt and the contempt for myself was really overwhelming. I know I was weeping. I had to do something, I couldn’t stand myself any longer, not for another second. Not one,” Grugel said. “I knew how sick and tired I was of being sick and tired. I knew I needed something.”

“At that moment on April 17, at 10 o’clock, 2009, I finally surrendered. He had been calling for years and I ignored it for years, all the way up to that last minute. I gave him my life.”

Grugel said his life didn’t change instantly, but the change started from the inside out.

“He started changing my heart first and then bringing my character in line with his image,” he said. “I had to realize that nobody could fix me but the creator who made me.”

“I prayed that he’d somehow give me the chance to change the lives of others in the name of the son. No matter how insignificant I was, to make some sort of impact,” Grugel said.

He asked Harmon if it would be possible to spend an hour a month at the Boyle Count Detention Center. Harmon said there were no openings.

“Phil (Yates) and him and Brian (Wofford)  had gotten together without me knowing it. He said, ‘Would you consider being our chaplain?’ I thought he lost his mind. And I thought the Lord lost his mind, too,” Grugel said.

That, Grugel said, made a deep impact on him.

“They put their confidence and trust in me and allowed me to do anything that would help these people in any way and would glorify the Lord,” he said.

Grugel said he’s been able to introduce Christ-centered programs and parenting classes into the jail since being there. He’s been amazed at the volunteers who come in to give their love and time.

“The people I’ve met, who just want to help the lost, the down, the dejected — people like me. Hundreds are reaching out to help, not just in the jail,” he said.

Grugel doesn’t use the term “inmates,” but chooses to call those at the detention center his “guests.”

Besides Harmon, Wofford and Yates, Grugel said he owes thanks to the staff and volunteers at the center, “who give up their time to share what Christ can do.”

He said he has to recognize Ida Roberts and the ASK Foundation of Harrodsburg, as well as the Hope Network of Danville, for their efforts in the fight against the drug epidemic; and to thank Robbie Bickett and Judge Jeffrey Dotson for what they do.

Grugel said he owes so much to his church, Calvary Baptist, and to his pastor Bren Rowe.

“I’d like them to know how much they’re really appreciated. There’s nothing I am or anything I hope to achieve without these people,” Grugel said. “I wouldn’t be sitting here without Jesus and these friends.”

“He puts so many wonderful people together,” he said.

At the jail, there’s now four Sunday services thanks to volunteer pastors. There’s been 60 baptisms, and “a bunch of cool stuff.”

They’ve also started giving individuals a “survival box” after they’ve served their time. It includes blankets, towels, matches, and a lot more to help them survive after starting life again.

They will also be starting the Living Free, a 12-step program in Christ, that Grugel will be the director of.

“There’s so much that the Lord is doing in that jail,” he said.

Grugel said he owes a lot to his “supportive” and “wonderful” wife of 23 years, Phyllis, his daughter, Angel, and his grandchildren, Lamont, 11, and Alana, 9. Grugel and his wife have custody of their grandchildren.

And above all, Grugel said, he gives credit to God.

“If the Lord can take my baggage, my garbage, my addiction, my hopelessness … I give Jesus the credit,” he said. “Obedience always brings amazing things.”