Danville in the driver’s seat: Admirals use big first half to win at Boyle 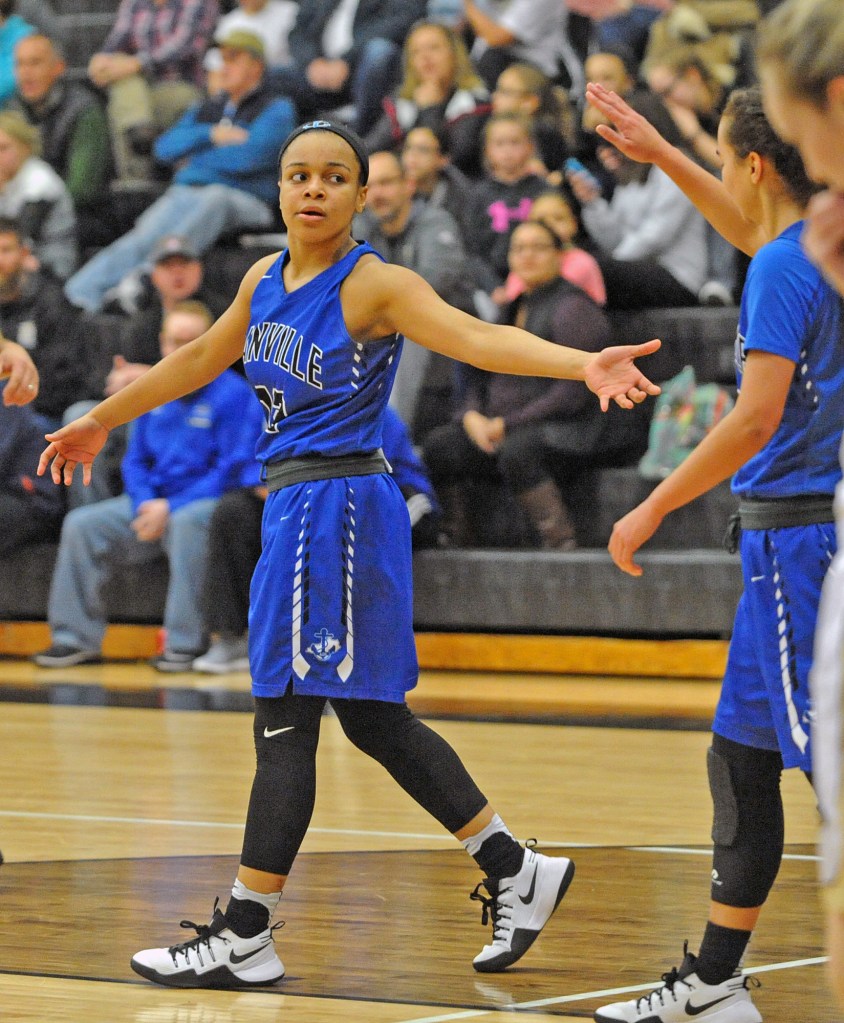 Danville girls’ basketball coach Michael Menifee and his players have developed trust in the past year and a half of basketball.

That trust was evident in the Admirals’ 54-49 victory Tuesday at Boyle County.

“That’s where summer ball helps you,” Menifee said. “We played a summer game, she had four fouls and I took her out. She told me, ‘Coach, I’m a senior. I can play with four fouls.’ I said, ‘You’re right, I’m going to trust you. Go in there.’ That relationship was built back in the summer, I understand, they understand the game and I have faith in them. We have that trust with each other. They trust me to put them in positions to win, I trust them to play to win.”

Both teams were slow out of the gates, with the Ads leading 12-9 after one quarter.

In the second quarter, Danville exploded for 21 points to take a 33-21 lead into halftime.

For Boyle coach Greg Edwards, the first half was unacceptable.

“We lost the game in the first half,” he said. “Everything that we talked about in practice the day before, we didn’t execute in the first half at all. We had to make some adjustments at halftime, and I thought we attacked the basket more in the third and fourth quarters. You can’t get down to a good team and give them opportunities where you’re not putting any pressure on them. We didn’t put any pressure on them in the first half. We had 21 points at halftime. That’s something that I can’t accept. I’m an offensive guy, 21 points at half, that’s not very good.”

Turner finished with a game-high 26 points. Zenoviah had 11 points and Alyvia had 14 points.

“It’s just kind of what Ivy Turner does,” Menifee said. “Her, ‘Novi and ‘Liv, we ride or die with them. They missed some layups there, but like I told them, ‘Just play great defense and we’ll get it back.’

“Ivy, I tell her, ‘Just push the ball. There’s not many people that can stay in front of you.’ She just makes things happen when it’s in her hands. I just sit back and enjoy what she can do. I know that she’s not a selfish player, so I know she’s not going to jack up shots. She gets to the rim with such ease and effort, then she gets fouled and knocks down her free throws. It’s a joy to coach her.”

Boyle’s defense limited Danville to just eight points in the third quarter. Harris came alive in the second half, scoring 14 of her 21 in the final 16 minutes. She went 12-for-15 from the foul line.

“Rebounding, we battled hard in the second half, but I thought in the first half we didn’t do a good job boxing out,” Edwards said. “It’s a tale of two halves. I thought our second half was better, but overall they were better.”

Edwards had to change his rotations with two regular contributors — Rachel Leath and Kasey McGirr — out on Tuesday.

“We were limited, you never want to use that as an excuse, but we struggled because our rotations were obviously different,” the coach said. “But we’ve got to play through that. I thought Hannah (Dean) played really well, I think she earned some more minutes tonight.”

Danville’s defense responded in the fourth quarter, forcing turnovers in the Boyle backcourt to put the game away.

“At the end of the day with us, it’s about us being us, playing solid defense,” Menifee said. “For us, an undersized team, really rebounding. We commanded the rebounding, we won the first half rebounding and then the game got a little murky there in the second half but we stayed the course and we came up with three big rebounds to close the game out.”

With the win, Danville extends its win streak to six games and takes sole possession of first place in the 45th District with a 2-0 record, with both wins coming on the road.

“That’s what we talked about all week, we are in a position where if we win tonight, we can be in the driver’s seat,” Menifee said. “It doesn’t guarantee us the one seed, but it puts us in a decent spot at this point. We’re feeling good about that. We’re going to be happy tonight, then tomorrow we’ll go back and get ready for Garrard.

“You want to win your home games and I feel comfortable with us being back on our side of town with Boyle and Lincoln when we flip it over for the second part of the district.”