Students get first-hand view of Congress through BCHS-Centre project 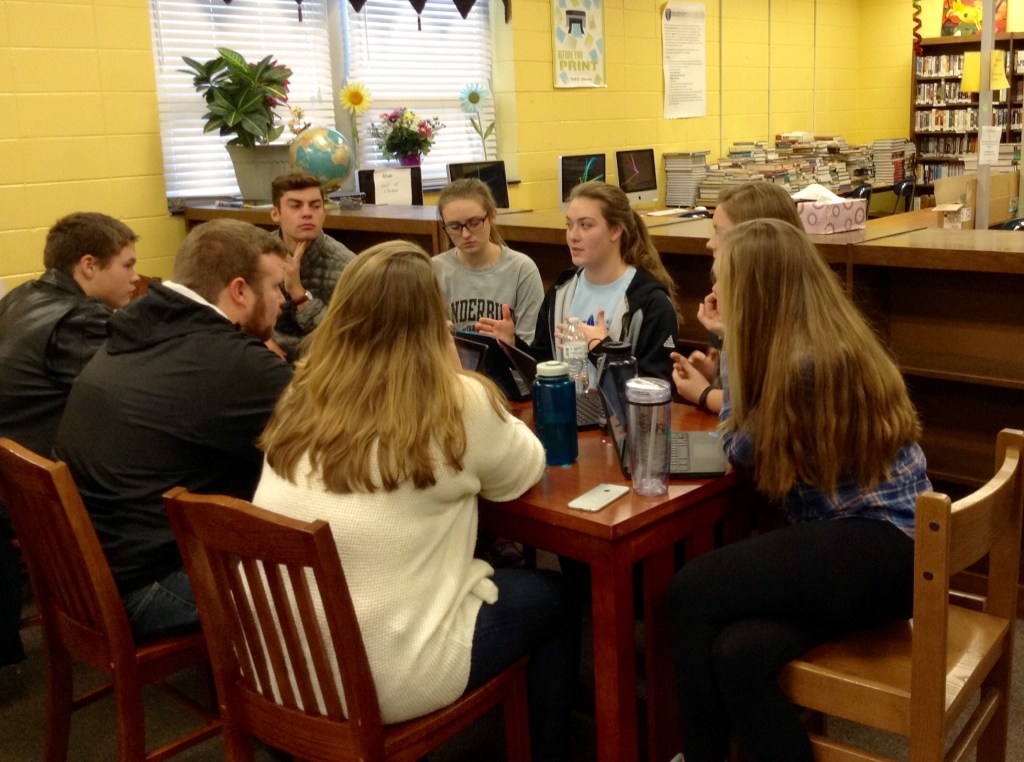 New and Knoll said the project really brings the experience of Congress to life, while helping students work together. 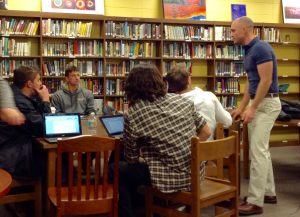 “This is putting into practice what they’re reading. So they can compare the textbook Congress with getting a feel of what it might actually be like,” Knoll said.

New teaches AP Government to seniors at BCHS, while Knoll — the John Marshall Harlan associate professor of politics at Centre— is teaching on the U.S. Congress during the college’s “Centre-term,” a three-week period of special classes that run in between the fall and spring semesters. The class lasts three hours a day. For the first half of class each day, the college students have a regular class, then for the second half, they visit the high school.

Both teachers had used a senate simulation before, but saw advantages in combining forces.

“With a larger group, it makes for more robust conversation,” New said. 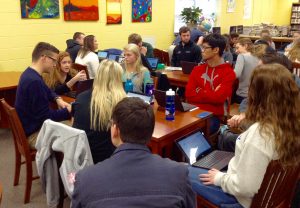 Kendra Peek/kendra.peek@amnews.com
Students in a committee discuss a bill.

Ian Ennis, a junior at Centre and the minority leader for the Democratic party in the simulated Congress, said he only fully began to understand Congress because of these simulations, in spite of having studied it in great detail before.

“It’s one thing to have someone teach how these things go; it’s another thing to actually apply it,” he said. “Until now, I’ve never fully understood it … I think it’s an extremely useful experience.”

To begin, students from the two schools were brought together and divided into Democrats and Republicans.

The students were assigned real senators in Washington, said McKinley Rush, a BCHS senior and Senate majority leader in the simulation.

Playing the role of a specific senator can be hard, said Rush, who is filling the shoes of Sen. Mitch McConnell.

“I’m not exactly like Mitch McConnell. Sometimes it’s really been hard to combine my opinion with his, and I’ve had to choose his opinions on some bills over mine. I can see where it would be hard if it’s public opinion versus your own,” Rush said. 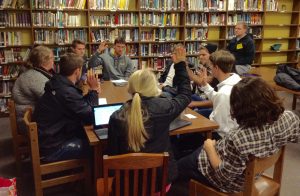 Kendra Peek/kendra.peek@amnews.com
Students take a vote regarding a bill in their committee while Centre Professor Benjamin Knoll watches in the background.

Knoll said his students are actually being graded on whether or not they would be reelected, based on how well they represented their party’s and the public’s opinions on topics, especially when those opinions differ from the student’s own.

New and Knoll built a Google platform to allow the students to communicate and submit their bills and ideas. Some of the bills submitted included one aimed at exiting the recent multinational treaty with Iran; one to recognize Jerusalem as the capital of Israel; and two individual ones that were later combined into a single bill to create a stronger paid maternity leave in the United States.

“We threw a small wrench into the whole thing, too, this morning, trying to mimic as much of the real environment as we can,” Knoll said. “We sent a bill this morning, after they had already started. After they got going, we sent a bill to the majority and minority leaders, saying, ‘this is a bill from the presidential transition committee. This is the Make America Great Again Act, to build a wall on the U.S.-Mexico border, to get reimbursed from Mexico.’”

The students working as the Democratic party were busy trying to put a hold on the bill, something that can happen in reality, New said.

“This is really helpful because it gives them the opportunity to not only generate legislation themselves, but to respond to legislation from a hypothetical president that has interesting political dynamics,” Knoll said. “The Democrats are going to be against it just on principal, the Republicans have to pick … it’ll be really interesting to see what they do.” 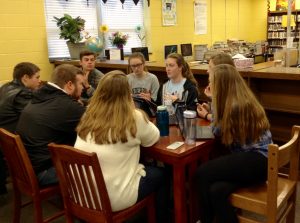 There are ways to get around the hold, the teachers said, but the students will have to figure out how with limited guidance.

After meeting with their parties, the Republican students then split into their committees within the party to further discuss their plans, while the Democratic students took a larger group strategy. Then the groups came together and entered into committee meetings, where the bills must go before making it to the Senate floor.

Later in the week, the library will be transformed into the Senate floor for the students, so they can get an even better feeling of what it’s like to argue for and against bills in Congress.

The whole process has been “intense,” said Dillard Collier, a BCHS student and the Democratic minority whip. Collier, who said he would love to have a future in politics, has really enjoyed the class.

“It’s worth it. I’ve been doing a lot of strategizing and planning for the Democratic party. Because of my role, I’ve been able to step back and look at the movement of the simulation. I oversee the direction that the committees are moving, what bills are being passed, what bills are being stalled. It’s pretty amazing. I’d like to see the real thing,” Collier said.

He credited New and Knoll for the work the two had done to get the simulation working as well as it had.

“It’s a tremendous amount of work they’re willing to put in. They deserve a lot of credit for that,” he said. 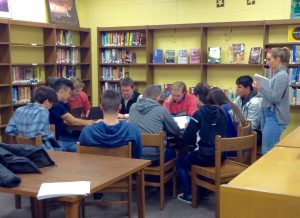 Kendra Peek/kendra.peek@amnews.com
Students in a committee discuss a bill.

It’s been a “chaotic” first week, in the class, said BCHS student and Republican Majority Whip Emma Noland — especially considering the Boyle County students were not in the building for two days last week due to snow.

On Thursday and Friday, students worked to find an alternative way of meeting, some using Google Hangouts, others just via phone conference. Despite the high school students not having school on for Martin Luther King Jr. Day on Monday, some of them still plan to come and work with the college students in their groups. Centre is still in school that day.

“It shows that they’ve bought in,” said New. “They see this as a valuable experience.”

Ennis said he and some of the students had been apprehensive at the thought of working with high school students, but that it had been a great experience so far.

“I think (this simulation) is fantastic. We have a great collection of dedicated high school and college students,” he said.