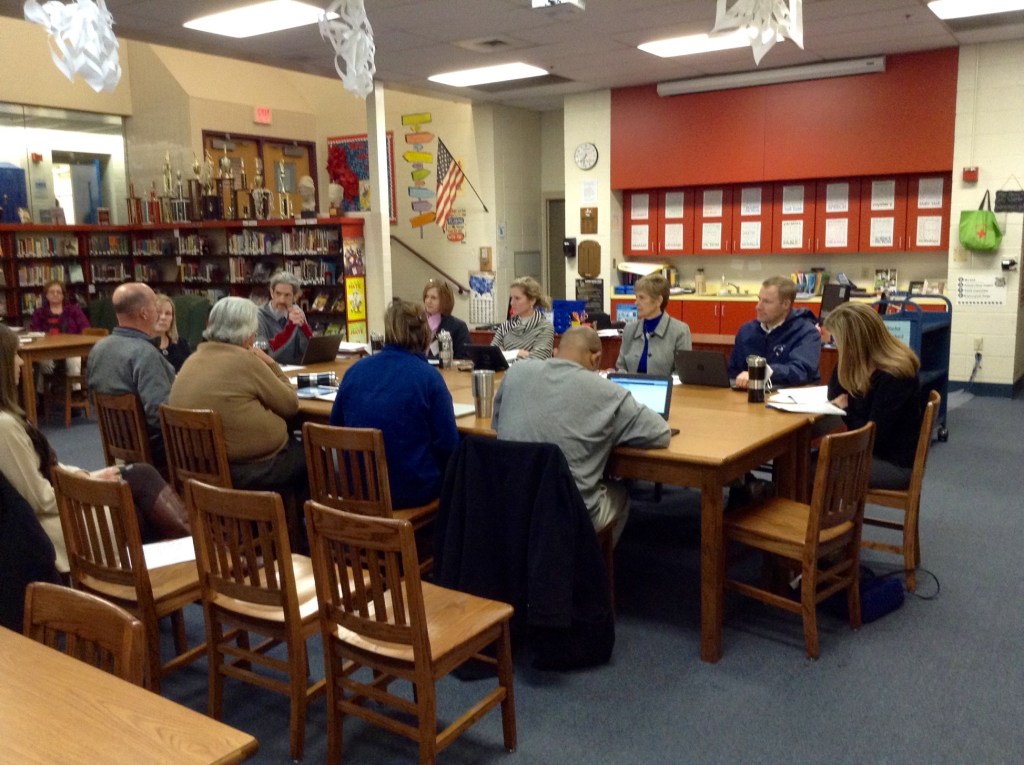 Kendra Peek/kendra.peek@amnews.com The Danville Board of Education met for a special working session Monday night at Bate Middle School library.

The Toliver Elementary School redesign project is about 45 percent finished, according to project manager Eric Steva with RossTarrant during Monday’s working session of the Danville Board of Education.

The addition, the first step in the redesign process, should be completed in March, “going live” after spring break, he said. When students return to the school in April, they should be occupying the new space, and the kitchen and cafeteria will be fully available.

“It will be here before you know it,” he said.

The new addition is to include administrative offices, a secure entryway, a multipurpose room, six classrooms and a multimedia room.

As children move into the new addition, they will vacate the third floor, enabling renovations to begin on the third floor around April 1. That is expected to be complete by Aug. 3, open in time for students when school begins in the fall.

Work will begin on the school’s gymnasium in June, or whenever school is out, and will likely go through October, Steva said. He explained that the firm had spoken to the school officials, explaining the need to have more than two months to complete the renovations on the gym. Officials had said they would rather the work be done in the summer and fall, when the weather is generally nicer. That way, the gym would be available when the temperatures are likely to be cold and there’s the potential for snow.

While the gymnasium is under renovation, the second floor will also undergo renovation from June through December. When that portion of the project is completed, the first floor renovation will begin, estimated in December, and is expected to end by May.

The final phase of the project is to complete the renovation of the stairs, to be completed from April to May.

If all goes according to plan, the renovation project will be completed by June 3, 2018, and the district’s second through fifth grade center will officially open in the fall of 2018.

Renovations are expected to begin at Hogsett Elementary School in the summer of 2018, transforming it into the district’s preschool through first grade center, Steva said. During that time, students will be housed at Jennie Rogers Elementary. Ideally, Hogsett will be open for students in fall of 2019, and work will begin at Jennie Rogers to transform it into the district central office.