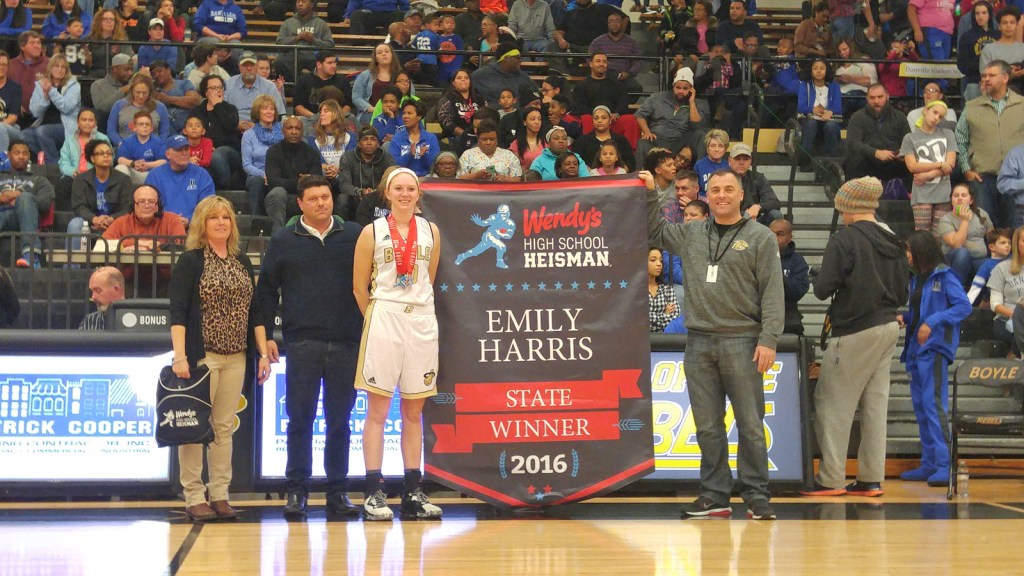 Those accolades come throughout the year: Soccer dominance in the fall, lighting up basketball scoreboards during winter and blazing around the track for state championships in spring.

But Harris’ most recent state title isn’t just for her athletics.

She won the Wendy’s High School Heisman award for the state of Kentucky, beating out all other school champions in the state. Wendy’s honors a champion from schools in the state, and school winners are narrowed down to 20 state finalists — 10 male and 10 female — before two state winners are announced.

To even apply, Wendy’s only accepted applications for students with at least a 3.0 GPA. Harris’ GPA is 4.082.

Wendy’s also looked at what student-athletes did in the community.

“We had to fill out short answer essays, clubs you’re involved in, community service and your community service hours, what you do inside of school and stuff like that,” Harris said. “I know one of my main focuses during the essay portion was the balancing between school, athletics and trying to do stuff in the community.”

Harris said in her time in high school, she’s been a member of DECA, FCA, Pep Club and the National Honors Society. Through those clubs and through sports, she’s racked up community service hours.

“Throughout clubs, we do a lot of events,” Harris said. “Every year for DECA we did the Angel Tree and stuff like that. Every year for soccer at the Brass Band Festival, we volunteer for taking up money for veterans. We usually do that every year. When I do community service, it’s usually through clubs and sports.”

Harris’ track coach Brent Wagner said what separates her from others is her will to win.

“I think it is awesome that she received the Heisman Trophy in Kentucky,” Edwards said. “I don’t think there is a more accomplished female in the state. I certainly am proud to be her coach.”

For winning the state award, Harris received a $1,000 college scholarship — and a party for 20 at Wendy’s. She was honored between games during Tuesday’s doubleheader with Danville.

“It was pretty exciting, I was honestly kind of surprised and shocked by it,” Harris said. “I know there was at least two people from each high school nominated, so it was a big award to win.”