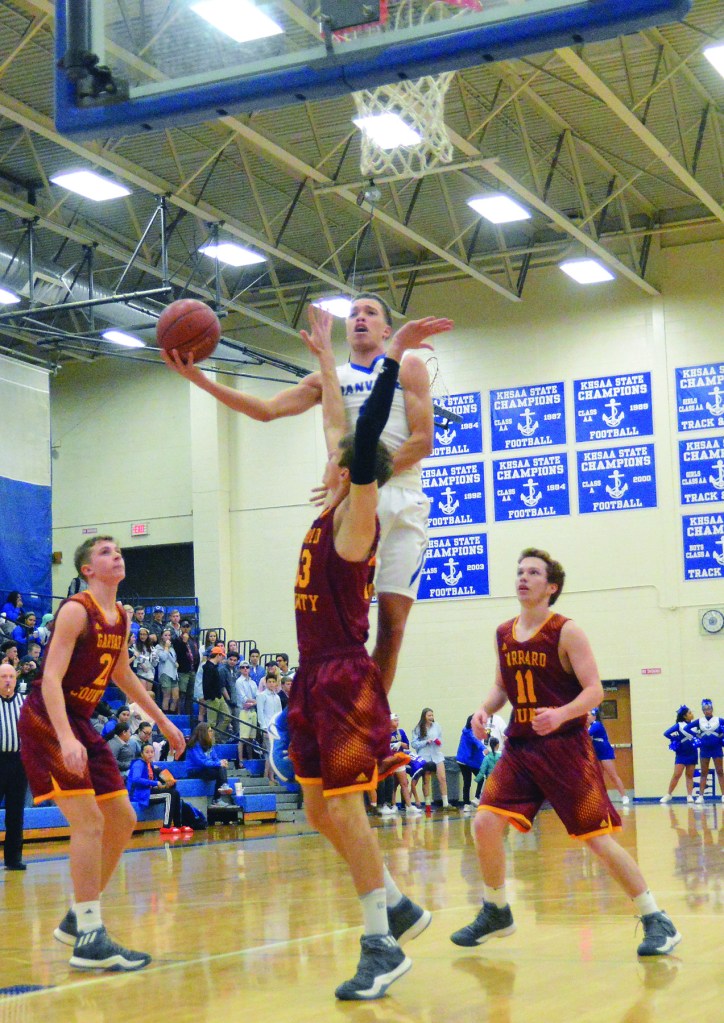 Jeremy Schneider/jeremy.schneider@amnews.com Danville's Jared Southerland lays up the ball during the first half of Friday's game against Garrard County.

Only one boys basketball team walked away a winner on the scoreboard from Friday’s matchup between Danville and Garrard County, but enough went right both ways that each coach was encouraged by the growth their young teams showed.

The Admirals overcame numerous rallies by the Golden Lions to carve out a 63-58 victory for their first 45th District win of the season.

Danville coach Ed McKinney has watched his squad struggle with close contests this year thanks in large part to the youth and inexperience of his roster  — only Jared Southerland returned with any real varsity experience from previous years.

But as the Lions closed within one point midway through Friday’s fourth quarter, it was players like Zach Thornton, Tanner Ford, DeShaud St. Martin and David Walker who stepped up.

“Jared’s the only one who’s been in a game of any significance like this, where we’ve won and had to make plays to win,” McKinney said. “Most of our wins have been fairly wide games. … These district games are going to be tough.”

After Garrard’s Carter Moss hit a 3-pointer to close the Danville lead to 55-54 with 3 minutes, 19 seconds remaining in the game, the Ads doubled up the Lions 8-4 in scoring. Ford had a pair of buckets, and Thornton — the heir apparent at quarterback for the football team — found a streaking David Walker down the sideline for a full-court pass to break the Garrard press.

From the beginning of the season, McKinney has spoken about the expectations the program had for Thornton and Walker. Along with Southerland, McKinney knows the Ads will improve once they find their flow on the court.

“When they get going, and they’re going to get going, we’ll be a lot better,” McKinney said. “Zach, he’s pretty beat up. He plays safety (in football), he has to come up and make a lot of tackles. He’s still nursing injuries. … He gutted it out. When he gets healthy, he’ll be a lot better.”

But it wasn’t all lost for Garrard, which dropped its sixth straight game to fall to 3-13 this season. First-year coach Ryan Young saw his team come together and perform more as a team than it has to this point.

“It’s tough in the respect we didn’t win the basketball game, but just as I told them in (the locker room), this is the first time since I’ve been in this program that I felt like we played as a family,” Young said.

The Lions were playing the second straight night against tough road opponents, falling by 12 points at East Jessamine on Thursday.

“We played a tough game, and we were in a similar situation (Thursday) night, down one at the half and they kind of hit us and we folded,” Young said. “Tonight, Danville came out, started the third quarter really well, it was one of those moments when we call a timeout, are we going to fight back, and my kids show a lot of grit.

“They’re not always the most talented and physically gifted team on the floor, but one thing about them, we took a big step forward with our toughness and our effort and our desire.”

Getting the ball to Dailey in the post was a priority for Young, something the team has been working on in practice and breaking down in film study.

“They have so many bad habits and it’s hard to break it,” Young said. “We’ve really tried to break it down for them, we’ve watched so much film to show them where (Dailey is) open and where they can feel comfortable getting him the ball. He’s grown so much since I’ve been in the program, as a sophomore, and he battles so hard in there for the ball.”

The Lions also out-shot Danville 26-7 from the free throw line, making 23 freebies to just three for the Ads.

“You get outscored 20 from the line, it’s pretty much a game you’re going to get beat at home,” McKinney said.

But it was balanced scoring which pulled the Ads to their first win since Dec. 27 and improving their record to 5-11. St. Martin had 13 points for the Ads, Ellison Stanfield and Ford each had 11. Walker and Thornton added another nine each, and Southerland had eight.

The Ads will take their next step this week in the 12th Region All-A Tournament when they host Burgin on Tuesday.