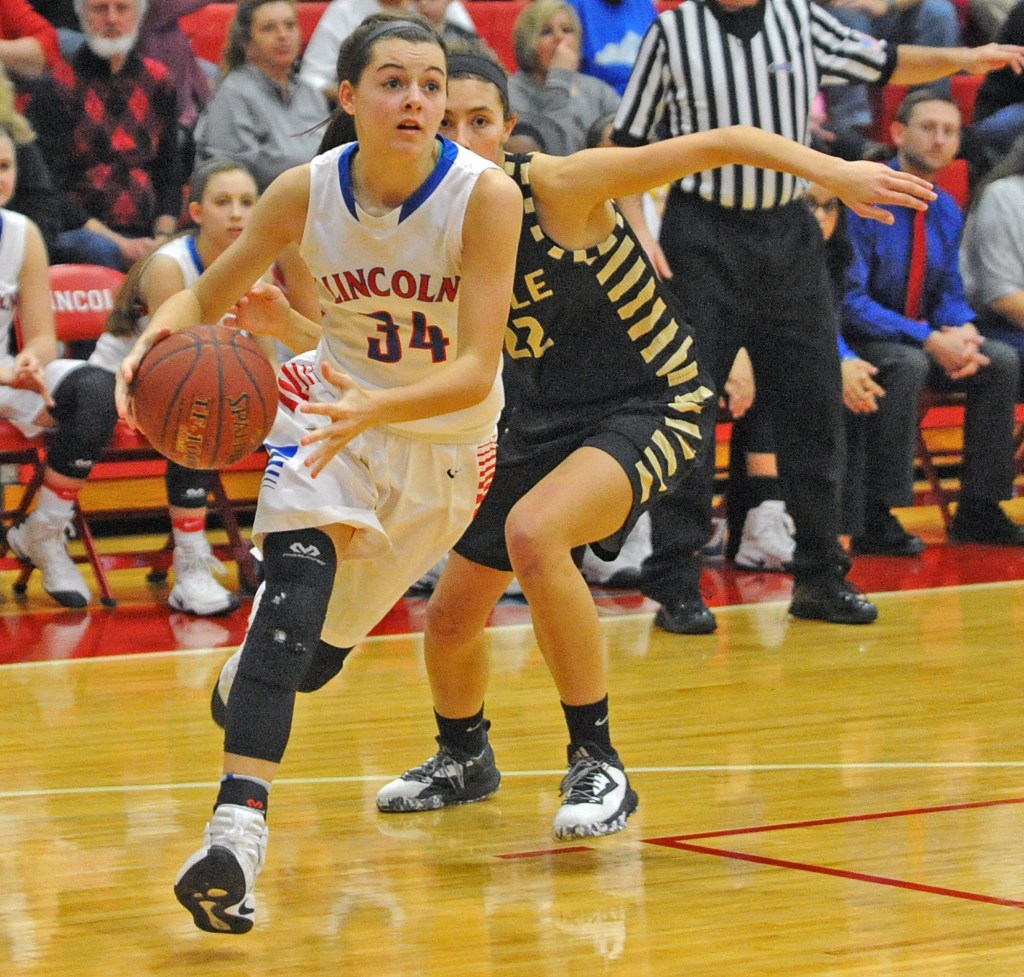 Matt Overing/matthew.overing@amnews.com Emma King drives to the basket during the first half against Boyle County on Friday.

The sophomore created matchup problems throughout the game, scoring 26 points in the Patriots’ 69-61 victory.

King scored 19 points in the first half, surpassing the 1,000 point mark. She received the game ball after the game.

“She’s a special player. To score 1,000 by her sophomore year, it’s a huge accomplishment,” Lincoln coach Cassandra McWhorter said. “She’s got a lot of great things in her future. I thought she did a good job tonight shooting the ball, her percentage is up. She finds a way to put it in the hole, she attacked the rim really well.

“She creates mismatches. You put someone with length on her and she’s got the speed so she can take them off of the dribble. If you put more of a guard on her, with her height and length, she creates a mismatch problem in the paint.”

Boyle tried all of the above but couldn’t slow King down. She scored nine points in the first quarter and 10 points in the second quarter, helping Lincoln to a 37-31 lead at halftime.

The Rebels started strong in the first quarter, leading 18-17 after the first eight minutes. Gracie Edmiston had nine points and McKayla Baker had seven points in the first frame.

“We did a good job of moving the basketball,” Boyle coach Greg Edwards said. “We wanted to attack and get out and run. We did a lot of those things well.

“But on defense, Emma King, she’s just hard to guard. We tried several people on her, but the bottom line is she just made a lot of good plays. You’ve got to give her credit for that.”

“That’s usually a recipe for failure, 11-for-28 from there,” Edwards said. “Free throws and offensive rebounding are the things that are really wearing us out. When we figure those problems out, I think we’ll be in pretty good shape. We’re doing some other things well. You put people in the right spots, you run the right thing and you get people open, we get fouled and go to the line, we don’t convert.”

Boyle made a run to start the second half behind Emmie Harris, who hit two deep threes at the start of the third quarter. But Lincoln wouldn’t cede the lead.

“Classic 45th District games, there’s going to be runs,” McWhorter said. “We had at one point, we were about seven points away from extending the lead to 20, and Boyle did a good job of cutting into that lead and making it a ball game. That’s where I’d like to see our team get those stops defensively, extend the lead and make it a little more comfortable on our side. That’s where you learn, you watch film and do some things differently. But overall, I’m proud of our girls and pleased to get a district win.”

The Patriots had multiple players guard Harris throughout the game, attempting to keep her in check as soon as she touched the ball.

“She gets a lot of well-deserved attention,” McWhorter said. “We threw a lot of different people at her, just trying to keep her run-down as much as possible. Our defenders did a really good job of stepping up and containing her. She’s still going to score double figures like she did because she’s a great player, but overall, I was pleased with our effort against her.”

Lincoln improved to 1-1 in the 45th District with the win. The Patriots will play Garrard County on Tuesday.

Boyle County beat Owensboro Catholic 71-56 on Saturday. Harris led all scorers with 31 points and Danielle Roney had 15 rebounds for the Rebels.