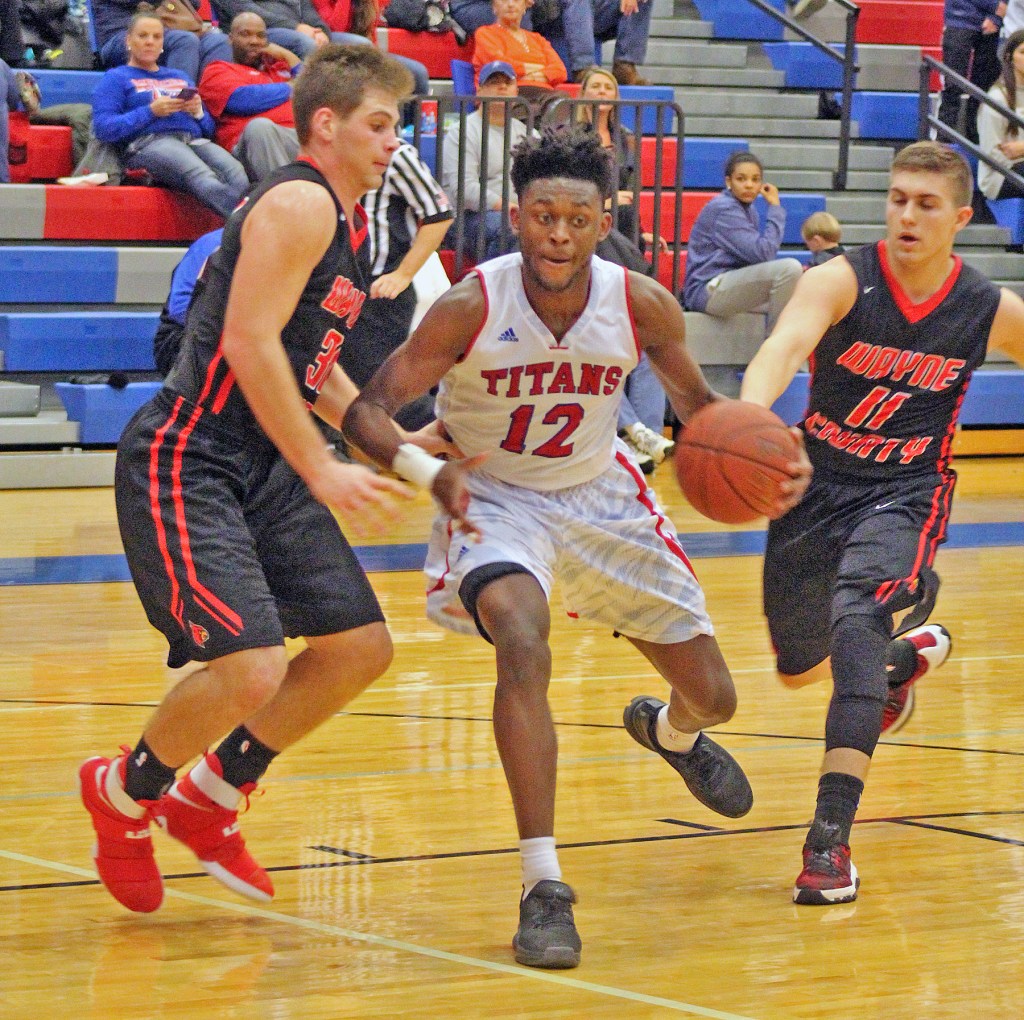 HARRODSBURG – A little rest did Trevon Faulkner a lot of good.

It had been 10 days since the Mercer County boys last took the floor, and a freshened Faulkner was a force Friday night, as he scored a career-high 46 points in the Titans’ 95-90 victory over Wayne County.

Faulkner scored 30 points in the second half, and Mercer coach Kurt Young said the Titans’ down time – which included four straight days without practice – helped to light a fire under the junior guard.

“I think the rest helped him a little bit, it got him a little more explosive. And that’s what we’ve been talking to him about: You can’t wait until late, it’s got to be the whole game,” Young said.

Faulkner nearly surpassed his season average of 21.1 points in the third quarter Friday, when he scored 20 points to help host Mercer (12-4) push past Wayne (9-8).

He said he used the Titans’ midseason break to work on his shooting.

I’ve been working a lot on the gun (shooting machine), working on consistency on my shot, getting to the rack,” he said.

Young said Mercer as a whole was a bit rusty, but this wasn’t a one-man show. The Titans fed off Faulkner in the second half, and three of his teammates finished in double figures.

“Grayson Blevins, I thought, did a great job playing off of him, and so did Carter Baughman. That’s the great thing about our depth: It’s been a different guy every single night,” Young said.

Blevins scored 14 points, including nine in the fourth quarter, when the Titans held off the Cardinals after taking a 10-point lead. Garrett Dean added 12 points, and Baughman had 11.

“My teammates, I love them. They help me every day in practice, and I help them,” Faulkner said. “We just work as a team. It’s just easy. I know I can trust my teammates at any time.”

Faulkner scored eight consecutive points late in the third quarter, giving Mercer its first lead of the second half with a 3-point goal and providing the foundation for a 16-2 run that vaulted the Titans from a 61-56 deficit to a 72-63 lead.

He went 7 for 9 from the field in the third quarter and finished 17 for 25 from the field and 8 for 9 at the free-throw line, and he also had a game-high 10 rebounds.

“It wasn’t bad, and he could’ve done some things better. But he’s such a good kid, and I think it’s great when kids do the right things and deserve the success, and he does,” Young said.

Mercer led 75-65 less than a minute into the fourth quarter and held off Wayne after the Cardinals, who had won seven of their previous nine games, closed the gap to 84-81 with 2:34remaining. The Titans scored nine of the next 13 points – six by Blevins, three by Faulkner – to secure the win.

“It’s a very good win, because these guys are playing good,” Faulkner said.

The Titans shot 56 percent from the field as they surpassed the 90-point mark for the third time this season. However, they also allowed more points than in any other game this season to a Wayne team that shot 59 percent and was 10 for 22 from 3-point range.

But the Titans’ defense improved in the second half, when the Cardinals went 2 for 10 from behind the line.

“The pace was where we wanted it to be; they were just making too many easy shots,” Young said. “We were just trying to find somebody to put a hand up. When we did things the right way, we were really good in the first half. We were all or nothing, though, and we just wanted to get more solid.”