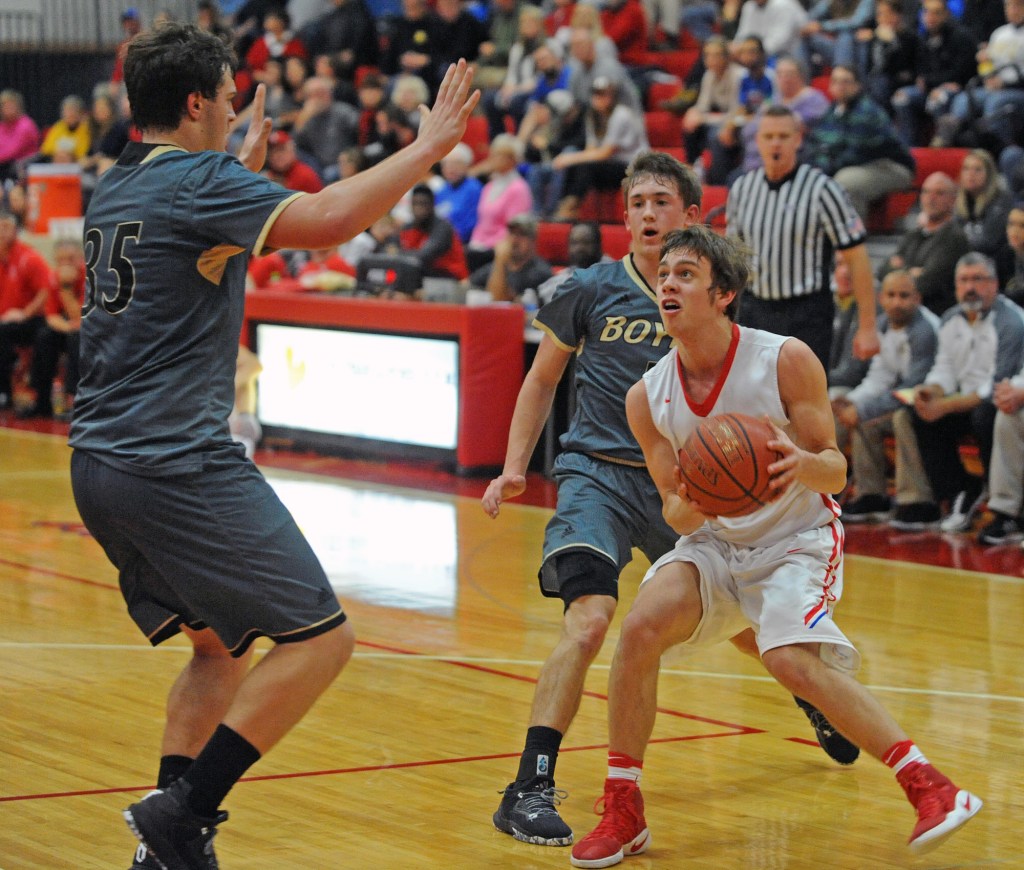 Matt Overing/matthew.overing@amnews.com Noah Young goes to the basket as Boyle County's Will Bramel (35) stands in his path during the first half.

STANFORD — One of the greatest high school basketball rivalries in the state wrote another chapter in an epic three-overtime thriller Friday.

“We told our kids, ‘this is why you play high school basketball in the state of Kentucky,’” Lincoln coach Jeff Jackson said. “It was a great atmosphere to play in, something that these kids will remember.”

Everyone at the game — from the players to the fans — won’t forget Friday the 13th for some time.

“It’s a great rivalry, a lot of respect between both programs,” Jackson said. “The games we had last year were crazy, all three of them, and tonight was crazy. We had chances, they had chances, they made plays, we made plays. Great crowd, great atmosphere.”

Lincoln held the slimmest of leads at halftime, 22-21. The third quarter was all defense, with just 14 points scored. The Patriots led 30-27 with eight minutes to play.

Neither team wanted to see just eight more minutes, though. The teams traded baskets in the fourth quarter, culminating in an epic final minute of regulation.

Lincoln’s Noah Young was fouled with the Patriots holding a 39-34 lead with 1:23 remaining. He missed the front end of a one-and-one and Boyle’s Bryce Slone hit a three.

Young hit two free throws to put Lincoln up four points. On Boyle’s next possession, Lincoln’s defense came up big, with Devin Alcorn forcing a turnover. He was fouled, went to the line and hit one-of-two free throws.

Young went to the line again with 6.9 seconds left and missed one of two free throws to give Lincoln a three-point lead.

Slone caught the inbounds and drove up the right side of the court, bounced off of a defender and hit his second three of the night to send the game to overtime.

Neither team could crack the opposing defense in overtime, with both teams scoring four points in the first extra period. Boyle held the ball away from Lincoln’s zone for a majority of the second overtime, which ended without either team scoring.

“It’s a heck of a rivalry. At the end of the second overtime, Bryce had a tremendous wide-open shot and just didn’t go,” Boyle coach Steve Adams said. “If it goes, we’re up three with 20 seconds to go.”

In the third OT, Lincoln scored five points — all from the foul line — and Reese Smith fouled out, Boyle’s primary defender on Young. Young went 3-for-4 from the line in the period, and Chase Phillips hit two free throws to give Lincoln a 52-49 lead with 15.5 seconds left.

The Rebels turned the ball over on their final possession. Slone was unable to handle a pass from Alexander and the ball bounced to Lincoln’s end of the court. Over and back was called with 0.9 on the clock.

Jackson praised Phillips for stepping up and sinking both free throws to put the Patriots up three.

“Chase is a good free throw shooter, he’s probably high 70s overall,” the coach said. “He’s not shy about stepping up there and shooting them. He hit two big ones there at the end, and our defensive stop at the end was good. I thought our intensity was good with it.”

Lincoln’s defense forced 16 Boyle turnovers and limited quality outside shots — the Rebels finished 3-of-15 from deep.

Adams was proud of the way his team played defense against the Patriots, who finished 14-for-39 from the field.

“The kids did a tremendous job. They grew up a lot,” Adams said. “We’ve made tremendous progress, we’re still not quite there yet. But our defense is getting much better.”

Lincoln was led by Young’s 27 points. He went 6-for-18 from the floor and 13-for-19 from the foul line. Those missed free throws will be motivation for the guard, Jackson said.

“Noah can get in the lane and score. I think he’s a tremendous player,” Jackson said. “We talked in here tonight after the game about our defensive effort, talked about going through in our walkthrough, and he said, ‘I’ll be in here early coach to shoot free throws.’ He’s shooting 71 percent, he missed six tonight and some of them were at crucial times, but he’s the guy we want shooting them, him and Chase.”

Boyle was led by Will Bramel’s 14 points. He went 7-for-9 from the floor and had two blocked shots.

“It makes us a better team when Will is able to stay in the game,” Adams said. “He’s doing a much better job of sealing and wanting the ball, and we’re doing a much better job of looking to get him the ball. So we’re making progress, just not quite as fast as we’d want. But like I told the kids, we came into a very, very tough environment and had a chance to win. We gave ourself a chance, we’re trying to make plays and we played hard. It’s coming.

“We’re disappointed that we lost, but we understand the big picture of where we’re trying to go.”

Mark your calendars: Boyle and Lincoln will play at Boyle on Jan. 27.