Memories written by Riley Colson Marcum and his wife Nora Francis Bates Marcum tell stories of their journey that began in Wayne County and ended in Lincoln County.

Copies of the handwritten stories on notebook paper with a typed version, accompanied by family photographs, have been compiled into a 198-page book. 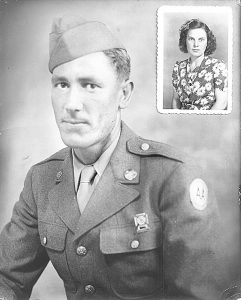 Riley Marcum is shown in the 1940s in his Army uniform with Nora in the top right corner.

“Happenings in the Life: The Good and the Bad” is a book that tells Riley’s story on 26 handwritten pages and Nora’s on 60 pages.

Both accounts begin before the couple met, their marriage, places they lived, him looking for work, his stint in the Army during World War II, their children and life along the way.

Riley was born in community of Zula in Wayne County and is the fifth of eight children of Charlie Joe Cleveland Marcum (1890-1952) and Ethel Elizabeth Page Marcum (1892-1967). Siblings are Samuel, Robert, Ora, Ollie Jane, Stanley and James.

Riley and Nora write about hardships and way of life while growing up in Wayne County.

Both families farmed, raised large gardens, and hunted for wild animals for hides to sell for extra money. Riley’s dad was a also blacksmith, a trade he taught his sons.

Riley finished the eighth grade at Fairview School. His first job was cutting timber and hauling logs for 50 cents a day. He later tried to get a job with the Works Progress Administration but when that failed, he hauled men to work and back. Each paid him 50 cents a day and he made more money than the WPA would have paid him.

Later, Riley hitchhiked to Indiana and Illinois to work with his mother’s relatives and others for bed and board or minimal wages.

He returned to Kentucky in 1939 where he met his future wife, Nora. They were married later that year.

Jobs were scarce in Kentucky and he returned to the north.

He went to vocational school to learn about grinding tools

drafted in 1944 into the Army. He traveled during World War II to Scotland, England, France, Belgium and Germany.

When he returned home after the war, they moved numerous times to Indiana and Illinois to find work and a better way of life. He worked in factories and on the railroad, farms, drove a school bus and built houses. He also worked for for the Corps of Engineers, was an inspector for the city of Monticello and worked in a mental health hospital.

The couple eventually returned to Wayne County and worked on a house they started earlier in their marriage. They made several additions to the place during their life.

Like her husband, Nora and her siblings grew up without electricity, running water or a bathroom. They used kerosene lamps and took baths in the wash tub with homemade lye soap.

Her father suffered from heart trouble and was unable to do hard work. He sold Smith and Raleigh products and traveled around taking photographs to sell. He also ran a store, but had a hard time collecting from people who bought on credit. Nora’s mother and brothers tried to collect after his death.

Her brother, Walter, and Dean Bertram, tried to collect a debt from one man, but instead of paying them cash, he gave them moonshine that made them drunk.

Nora wrote about when her father became ill and died, leaving her mother who also was ill and had to to be hospitalized a couple of times.

The family stayed together with the help of good neighbors and other family members.

The family was self-sufficient with a garden for food, and made their own brooms and soap. They had a horse, raised tobacco and corn, and wheat.

Their mother made their clothes and kept them mended.

“I guess this must have been the Depression years. But we didn’t know it was a depression. We just thought it was because we didn’t have money to buy some things we needed. I guess we had it harder than most families around.

“But mother worked very hard and kept us together. She was a great mother for the 92 years and 11 months she lived.”

Nora recalled when they went to a one-room school. “We always started school in the morning by saying the Lord’s Prayer, or each one saying a Bible verse. Sometimes singing or saying the pledge to the flag.”

Boys walked girls to church or to someone’s house to talk while they were dating. There were few cars.

The first time she remembers seeing Riley he was with some friends. “I remember when I heard the name Marcum I thought that was an awful sounding name. I had no idea that name someday would be my name.”

She lied about her age, 17 years old, when she and Riley applied for a marriage license and signed her mother’s name on it. They were married in September of 1939. 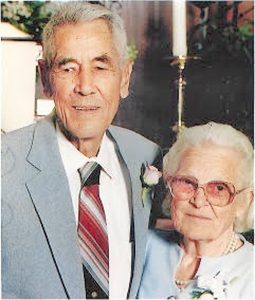 “I hope none will ever have things bad. But we can live without a lot of things we have now days. We were happy with what we had.”

The couple moved to Stanford in 1996 to be closer to their children.

Nora ended her story in May of 1994. She also said: “I know I will mispell lots of words, and I don’t know how to put in punctuation marks where they should go and other things about writing, but I hope the ones who read this can understand and get something out of it.”

FYI:
The book is available at lulu.com. The color version is $50 and the black and white is $20. 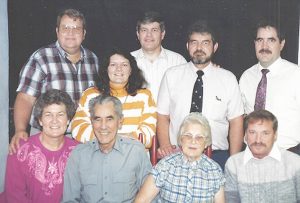 Riley and Nora Marcum with their children in 1992. From left, are, seated, Ora Jane, Riley and Nora, and Clayton Upchurch, widower of Mary Marcum. Standing, Roger, Cynthia, John, Bob and Bill Marcum.