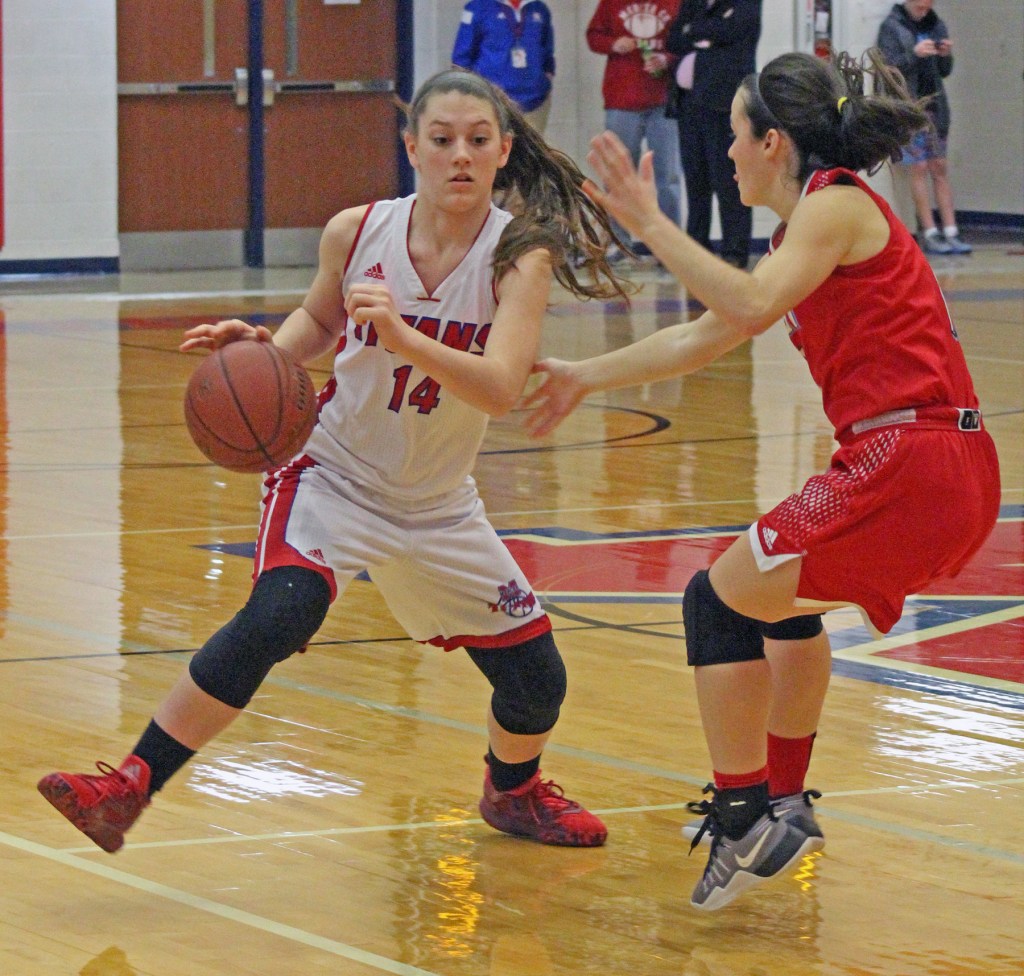 Mike Marsee/For the Advocate-Messenger Cam Preston of Mercer County drives along the perimeter as West Jessamine’s Bethany Hamilton guards her during the fourth quarter.

HARRODSBURG – Their records may be identical, but there is still a great deal of difference between the Mercer County and West Jessamine girls.

That was evident from the opening tip Friday night, when Mercer began to dismantle West Jessamine in the same way the Titans have done for years by scoring the first 22 points in a 76-31 romp.

Mercer has won all 27 of its meetings with West Jessamine, and only a couple of them have been close. In fact, the last 14 games between the teams have been decided by 22 points or more.

This game didn’t have the appeal of many of the others on the Titans’ challenging schedule – they had just beaten Franklin County, the team that knocked them out of last year’s state tournament, the night before – but Mercer coach Chris Souder was glad to see that it had their full attention.

“It’s a district game, and I think we’ve convinced our kids over the years you’ve got to take these seriously. Now we’re only playing them once, so you’ve got to make sure,” Souder said. “Sometimes you worry about letdown, but I really wasn’t tonight. They understand the magnitude of what you have to do in the district.”

Visiting West Jessamine (13-4, 1-1 46th District) actually had a better record than Mercer (13-4, 1-1) when the game began, but the Titans were in control from start to finish as they cruised to their 62nd consecutive district win.

Mercer led 9-0 after scoring on four of its first five possessions, and five different players scored during the Titans’ opening 22-0 run. The Colts, meanwhile, missed nine shots and turned the ball over nine times before finally getting on the board in the closing seconds of the first quarter.

It was 39-6 five minutes into the second period and 47-8 at halftime, and the Titans led by as many as 49 points in the second half.

Lyric Houston led Mercer with 21 points and 10 rebounds, keeping them on track toward a pizza party promised them by Souder if a Titan has a double-double in five consecutive games.

“We’ve been challenging kids to get a double-double,” Souder said. “Tonight was game three, and it’s been her (in all three games). It’d be nice if somebody else gets one.”

Alie Burke went 5 for 5 from 3-point range and scored 17 points off the bench for the Titans, and Emma Davis had 12 points. Eleven different Mercer players got into the scoring column.

Mercer shot 56 percent from the field and went 10 for 21 from 3-point range. West Jessamine, which frequently settled for 3-point shots against the Titans’ zone defense, shot 23 percent overall and was 6 for 26 from long range.

“We’ve been working on a lot of zone stuff, so we decided we were going to continue to work on it, try some different things and put people in different positions,” Souder said.

Mercer has three days between this game and its next game Tuesday against Paul Dunbar. That’s a luxury the Titans haven’t had since the period between its two holiday tournaments.

“I think when I told them I was going to give them Saturday and Sunday they were a little shocked,” Souder said. “I call these the dog days of January, and our schedule’s so tough we really don’t have time for a lull, so we’ve got to be a little bit smarter in terms of days off and how intense we are in practice.”