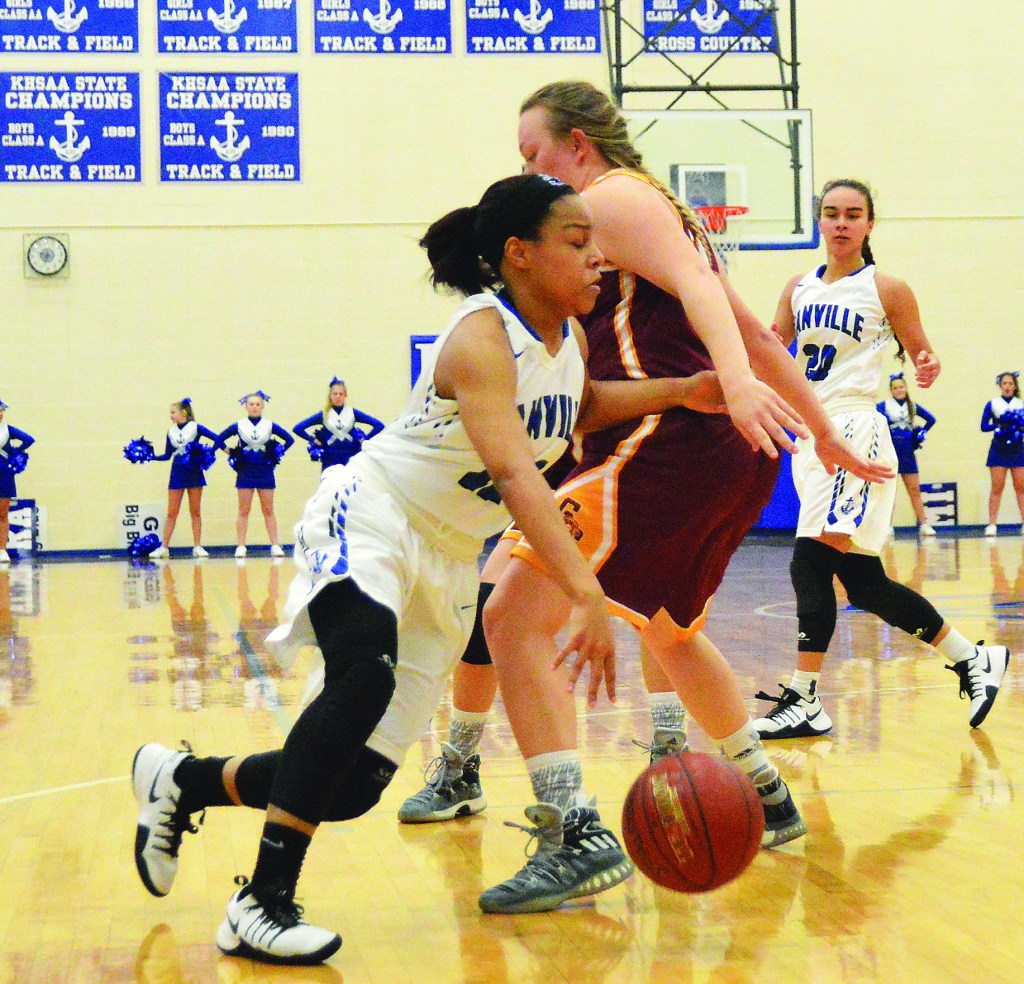 For so many reasons, Danville girls basketball coach Michael Menifee was worried about Friday night’s matchup with Garrard County.

And with Lincoln County still hot on their heels, the Admirals’ coach knew his team could ill afford a slip up against the Golden Lions. Add to that sophomore guard Ivy Turner being on the verge of history, no school on Friday, and a seemingly more marquee showdown in the 45th District happening in Stanford, and all signs pointed to a dangerous game for the Ads.

Instead, the Ads overwhelmed Garrard in the second quarter and rebounded from a sluggish third quarter to stay perfect in the district with a 70-56 win.

“I was worried, but they came out prepared,” Menifee said. “Knowing what Ivy was able to accomplish tonight, I think the girls wanted to play hard for her. That’s the type of team they are — they compete for each other, they go hard for each other — so that kind of helped.”

Turner became the newest member of the 1,000-point club at Danville on a soft jumper late in the third quarter. She finished with a team-high 21 points.

“If you can score 1,000 points in your high school career, and as a sophomore at that, that’s huge,” Menifee said. “In (the locker room), we cheered and, typical Ivy, she just gave a little smile and said, ‘Thank you.’ She’s so humble and gracious about it, and that’s why you love her and it’s so good to coach her — it’s never about her or grandiose. She’s happy that she got it, but she’s more happy we won the game and went to 3-0 in the district.”

But it was that focus on getting Turner into the club which nearly derailed the Ads quest for a district title, and Menifee took the blame.

“I tried to run some stuff to get Ivy the two points instead letting the game play natural like it was,” Menifee said. “I said, ‘Let’s go back to that,’ and we were able to extend our lead back out and close the game out.”

The Ads entered the second half with a comfortable 42-25 lead, highlighted by a 25-13 edge in the second quarter. But instead of packing up their gear, the Golden Lions fought back in the third. What was once a 17-point margin turned into nine points entering the fourth quarter.

Garrard senior Sam Adams had 16 of her game-high 23 points after halftime, and she made five 3-pointers to keep the Lions in the fight.

However, Danville opened the fourth on a 12-0 run, and while Adams and Fran Montgomery made late 3s in the quarter, it was too late as Danville held a 21-point lead with just over one minute to play.

Alyvia Walker scored 18 points and Carolina Gonzales added 10 to join Turner in double figures for the Ads (10-6, 3-0). Zenoviah Walker and Kirby Alcorn each had nine points.

The Ads went 20-of-21 from the free throw line, making their first 19 attempts.