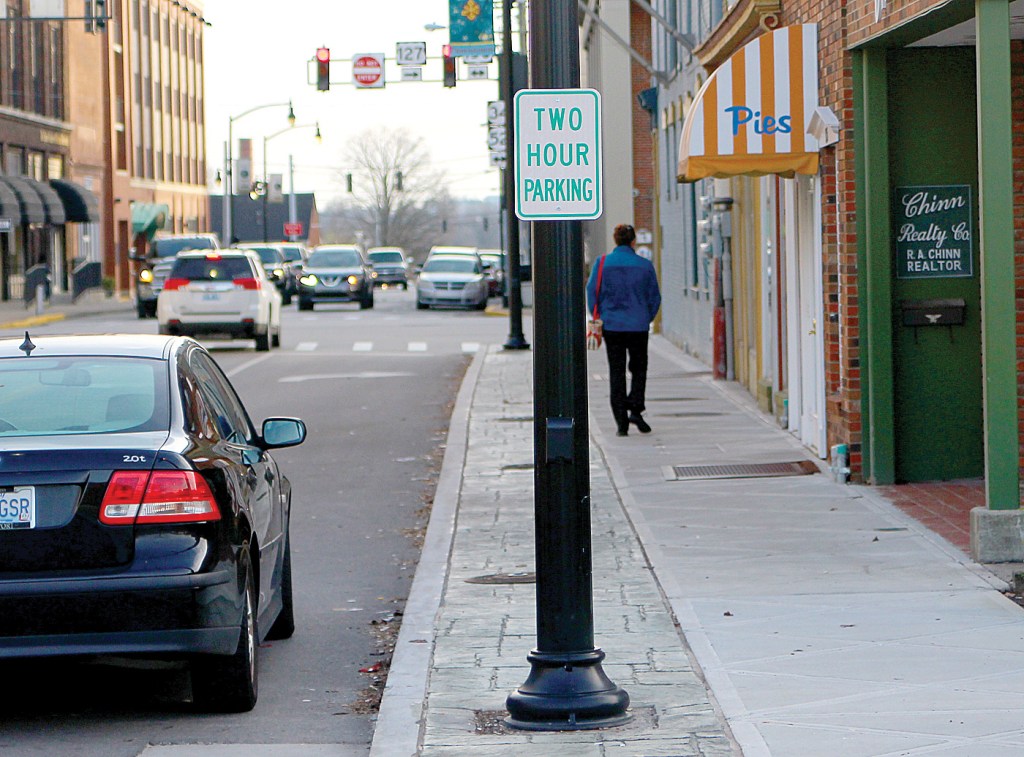 Ben Kleppinger/ben.kleppinger@amnews.comOne downtown Danville business owner is blaming a lack of parking enforcement for problems with downtown residents filling spaces for many hours or days at a time.

At the last Danville City Commission meeting, there was a codes enforcement complaint made by a downtown business owner about the issue of downtown parking and regulations.

The owner of Pies For You and Cookies, Too, Wilma Brown, approached the microphone during “hear the public” to discuss downtown parking.

Brown said there is a parking problem downtown and “it’s an ongoing problem.”

She said there have been “special parking problems” since Jeff Peek (former parking control officer)  left his position, where he was responsible for marking tires of parked cars.

“Honestly, for several months, nobody has marked tires and people park wherever they want,” Brown said.

According to Brown, it’s not the customers who are causing the problems, but the employees, business owners and apartment dwellers “that stay on the street for hours, sometimes days a time — and they are the same people all the time.”

Many downtown parking spots are supposed to be limited to two-hour free parking from 9 a.m. to 5 p.m. Monday-Friday, according to Danville regulations.

In handicap parking spots, Codes Director Bridgette Lester said there is a four-hour parking limit. After 5 p.m., there is no limit.

Since there is no longer an enforcement officer to mark tires and give tickets, Lester said it’s hard to get an officer downtown to fill that capacity.

If the city does not mark tires and give out parking tickets, Brown said the city is losing money.

“If they’re not requiring people who work downtown to have parking places, then they are losing money in the parking lots,” she said. “So, it’s a financial thing for the city.”

Brown discussed an incident that she’s had recently with a downtown resident who she said was parking in front of her business on Third Street. According to Brown, the resident would park there for days, and in this case — it was five days. She said this has happened with the same persona several times before.

When the snow came a couple weeks ago, Brown said she called the codes enforcement office and spoke with a codes officer and asked if they could check on the car.

At that point, the car was still parked in front of her business and it was covered in snow.

According to Brown, no one from the codes enforcement office checked on the car.

When Brown called the office again to ask why no one checked on the car, the codes officer told her it was too cold for someone to come out during severe weather conditions, and people should be allowed to park wherever they want in these cases.

Customers should be allowed to take advantage of parking spaces that are closer to the businesses, not downtown residents, Brown said.

The car was moved after she called the owner of the building.

“We all have parking problems,” she said. “There should be somebody marking tires.”

Lester said the city is currently looking for someone to fill the position of marking tires.