Lydia Zeller Kratzwald, 89, passed away Tuesday, Jan. 17, 2017. The daughter of the late William and Louise Gigler Zeller and wife of the late Rudolph Joseph Kratzwald, Lydia was born May 18, 1927, in the Harris Creek area of Moreland, Kentucky, in the farmhouse she lived in most of her life. 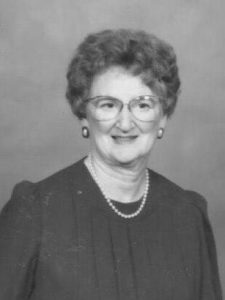 After attending St. Camillus Academy in Corbin, Kentucky, she graduated from Moreland High School in 1945. She retired after 42 years from the Palm Beach Company, where she worked as a supervisor for the last 25 years.

Lydia was a faithful member of St. Patrick’s Catholic Church in Junction City, where she served as a Eucharist Minister and later of Saints Peter and Paul Church of Danville where she volunteered at the Amen Corner. Lydia was an active member of the Democratic Women’s Club, the Lancaster Road Homemaker’s Club and the Steppin Stones and Sassy Steppers Dance Clubs. Lydia had many hobbies, including ceramics, drawing, painting, line dancing, reading and traveling. An avid seamstress, she enjoyed sewing for her family and made her granddaughter’s wedding and bridesmaid’s dresses. Fond of the outdoors, Lydia could be found happily mowing the lawn, running a chain saw or tending her garden.

Survivors include two daughters, Cecilia (George) Teater of Danville and Emily (Vincent) Mayberry of West Palm Beach, FL; one granddaughter, Kelli (Steve) Abshear, of Washington County; and two great grandchildren, Tristan and Carla Jeffery. In addition to her husband and parents, she was preceded in death by a sister, Agnes Singler and a brother, William “Bill” Zeller.

Visitation will be from 5-8 p.m. on Friday, Jan. 20, 2017, at W.L. Pruitt Funeral Home in Moreland. A mass of Christian burial will be held at Ss. Peter and Paul Catholic Church at 11 a.m. Saturday, Jan. 21, 2017, with Father Alan Carter officiating. Burial will follow at Danville Memorial Gardens.