Research on names of covered bridges in Lincoln County spanning Dix River and Hanging Fork indicate both were called “Hubble”.

Walter Laughlin, who has been doing research on Kentucky covered bridges more than 40 years years, has found the Hedgeville Bridge over Hanging Fork at the Boyle-Lincoln County line was known locally as the Hubble Bridge.

The bridge over Dix River at the Garrard-Lincoln County line which burned in 1955 was known as the Hubble Road Bridge. 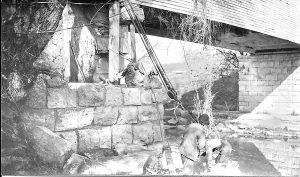 Abutment repairs are made to the Hedgeville Bridge over Hanging Fork at the Boyle-Lincoln County line. The bridge was repaired in 1916 and replaced by a concrete structure in 1941.

In the early 1900s, the Hubble Road Bridge also was known as the Henry Bruce Bridge.

Earlier information states Hedgeville Bridge was built by Lewis Wernwag, but that was not possible.

Laughlin said Wernwag may have built an earlier bridge at the Hedgeville site, however, he did build the bridge over Hanging Fork on U.S. 150 in Lincoln County as well as the Camp Nelson and Kings Mill bridges.

The truss in the Hedgeville Bridge was not patented until 1847. Wernwag left Kentucky about 1839 and died in 1843.

An article dated Jan. 4, 1916, in the Interior Journal in Stanford, indicates the covered bridge between Hubble and Danville was in dire need of repairs.

McKee Riffe, Lincoln County engineer, is doing everything he can to make the bridge across Hanging Fork safe for traffic.

The bridge is owned jointly by Lincoln and Boyle counties.

Boyle County officials have been notified a number of times conferring the condition of the bridge, but have postponed cooperating with Lincoln officials in having necessary repair work done, until the bridge is getting in a dangerous condition.

Riffe made an examination as soon as he heard of its condition and found that one of the wing walls of the main abutments was in “very bad shape”, and some other form of support for the bridge would have to be provided at once.

He took a “force of men to the bridge Monday to work on supporters,” until some joint action about the work can be obtained from the two counties which own it.

Considerable damage was done to the covered bridge by high water of creeks and rivers in the past weeks, according to an article Dec. 30, 1915, in the Kentucky Advocate.

Small creeks have been past fording and many people have been unable to reach town.

Dr. O. May, who was spending a few days in Casey County, has been unable to return home on account of high water.

The famous old covered bridge which spans Hanging Fork on Lancaster Pike east of Hedgeville has been seriously damaged.

A part of the abutments have washed out and there has been a considerable wash-out in the road.

It is said the place is dangerous at night and that in day time, by proper care, the bridge may be crossed. 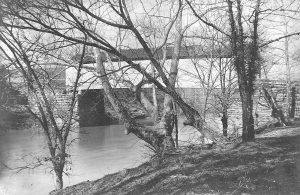 A covered bridge on U.S. 150 that span Hanging Fork Creek between Stanford and Danville was replaced by a concrete structure.

Traffic on the covered bridge that spans Hanging Fork Creek on the Boyle-Lincoln line came to an end in the early 1940s, according to an article in the Courier-Journal dated April 14, 1941.

“A new concrete bridge will be erected this year to replace the old covered bridge.”

The structure was scheduled for demolition.

Boyle County and the WPA (Works Progress Administration) was to cooperate in the project.

At the time the article appeared in the Courier, at least four covered bridges in Kentucky, considerably older than the Hedgeville bridge were standing, Laughlin said. Three dated to the 1830s and one was built in 1810.  One of the four is still standing.

Hedgeville most likely was built about 1865, he said.