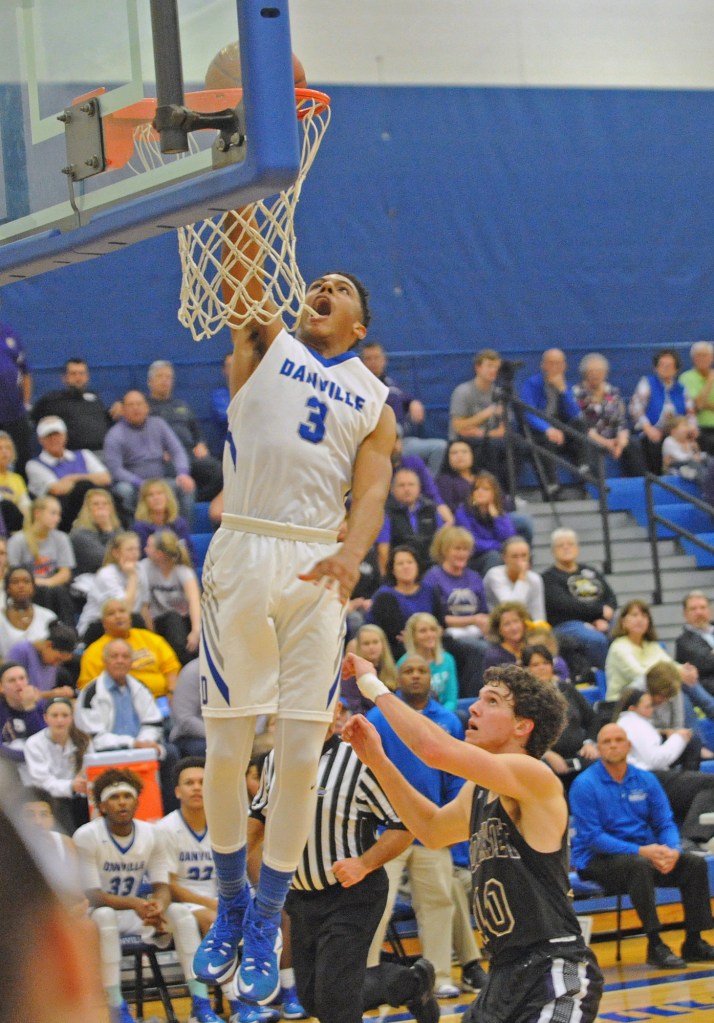 Whatever the reasons may be, there seems to be more pressure on high school athletes to pick one sport and stick with it throughout the year. And it might not always be the best idea.

“In addition, specialized athletes sustained 60 percent more new lower-extremity injuries during the study than athletes who did not specialize,” according to the report.

Those are some eye-opening numbers, but the one-sport athlete lives on. Perhaps it’s a personal choice, or maybe they see it as a way to increase their likelihood of attracting college scholarships.

In this week’s Monday Mailbag, area basketball coaches were asked about coaching athletes who don’t stray from the hardwood.

1. What are your opinions on one-sport vs. multi-sport athletes? Have you or would you ever encourage one of your players to focus on only basketball?

Ed McKinney, Danville boys coach: I’ve spent my entire coaching career having most of our team being multi-sport guys. At small schools, coaches have to share athletes. And I tell our guys all the time, if you really want to play something or be in the band or be in the school play, then you should do it. Your high school days go by quickly. And I tell them I’ve never had anybody come back after graduation and say they wish they hadn’t participated in something, but hundreds come back and say they wish they had.

Michael Menifee, Danville girls coach: I think in high school kids should play multiple sports and enjoy the high school experience. No, I would never encourage a kid to play just basketball.

Steve Adams, Boyle County boys coach: We like multi-sport athletes. I would never tell a kid not to play another sport. The only exception to that would be a kid that was being recruited and had never played another sport before.

Kurt Young, Mercer County boys coach: I think that is great for student-athletes to play multi-sports. I feel that it not only keeps them fresh but they pick up specific skills in other sports that would not develop as much as if they were a single sport athlete. I think some worry about injuries, but injuries can happen anywhere and are just as likely if not more to happen if you are a 365-day single sport athlete. No, I wouldn’t encourage anyone to focus only on basketball, but if a young man has a college future in a particular sport, than I would work with the other coaches to make sure that they are staying sharp and in shape for the sport of their choice. For example, if we had a high level baseball player and he was playing basketball for the love of the game, we would make sure that he continues to do what he needs in baseball (weight training, stretching, throwing, etc) for example. If he had visits to take to other schools we would work around the visit.

Scott Latham, Garrard County girls coach: My philosophy has always been let student-athletes play whatever they want to play. At least they are staying conditioned to some extent. The only way I would tell student athletes to stick to one sport if they were being recruited heavily and they had the opportunity for a full scholarship.

Chris Souder, Mercer County girls coach: I really just think it depends on the athlete and what they want regardless of maybe what we want them to do. I would never tell a kid to focus just on one sport, but if they do just choose just basketball then be the best version of yourself!

2. Most of the schools around here are small enough that the best athletes play multiple sports. What are the hurdles or sacrifices you as a coach need to make to share the talent? It has to be important to have a good working relationship with the coaches in other sports.

R.Young: I hope to establish our program where we can get some more of our athletes to come out for basketball.  We don’t have many multiple sports players in our school system right now. I get along with (baseball) coach C.J. Lynn and (football) coach Jerry Perry very well. They are great leaders of young people, and I think we are focused on competing and winning ball games, and helping our student-athletes in anyway that we can.

McKinney: I think we do a very good job at Danville with sharing athletes and making it so they can play multiple sports. Our coaches work well with each other and we put the student athlete first, I think.

Menifee: The biggest obstacle is not having them there at the start of practice for the season. But they are athletes, that’s why the can play multi-sports. They usually adapt well once you get them back from the other sport.

Adams: We have to share athletes at Boyle. All the coaches work together to see that kids can play all the sports that they would like. The negative for basketball is that we get players right as games start and that makes it difficult to organize and work everyone in. The positive to that is we can build some depth and we usually get better as the year progresses.

K.Young: I think that the main hurdle is making sure that everyone is on the same page and put the student-athletes interests and wants at the forefront. We have to do what is best for them and not the team. That is the tradeoff in sharing athletes. If an athlete is a college talent and wants to pursue a career in that sport than it is necessary for the secondary coach to make some adjustments/sacrifices for that athlete. On the other hand, the primary sport coach has to be willing to work with the secondary sport also and not try to take time from them just for the sake of doing so. I believe that if we put the student-athlete’s best interest and well-being first than it can be a mutually beneficial relationship that everyone gains from (most importantly the student-athlete).

Latham: With sharing athletes in multiple sports, we try not to do as much in the summers. Kids need time to allow their bodies to rest and just resting through dead period is not nearly enough. You have to be able to give and take and not overuse the athletes.

Souder: I think with multisport athletes it is vital you work with the coaches of other sports. The absolute worst thing you can do is ask a player to choose a sport!

3. If you could coach one player — past or present, any level, not just from the area — who would it be and why?

R.Young: Obviously, it’s very early in my career so that is a tough one to answer. I have been fortunate to have such great kids to coach in my first season at Garrard. I guess the easy answer would be my brother (Lincoln County senior Noah Young). Playing against him is quite the challenge.

McKinney: That’s a tough one, but to answer the question, I’ll say Tim Duncan because he was the ultimate team guy who put winning above all else and never really promoted himself. He passed on bigger money and prestige to stay in a small market with a team and a coach that valued winning above all else. Plus, he was pretty dang good!

Menifee: There are so many good athletes that have been in the area, I couldn’t pick just one.

Adams: There are a lot, such as Kareem Abdul-Jabbar, Bill Walton, Larry Bird, George Gervin, Pete Maravich, Michael Jordan, Magic Johnson. The why is easy — Hall of Famers.

K.Young: Great question. I think that as a basketball coach it would be extremely hard not to pick Michael Jordan. Not only is he the G.O.A.T but to be able coach someone with his competitiveness and passion would be a dream.

Latham: I love my team, and I love coaching this group of girls! But I would love to coach Michael Jordan — his basketball ability and work ethic when he was in his prime and the leadership he showed to his teammates on and off the floor. Just being around that type of athlete one time would be incredible!

Souder: I can honestly say that since I have coached my daughter and all my nieces that live here I am pretty satisfied! I would have loved to coach my two nieces Katie and Amanda Uhl (my sister’s daughters). They grew up and live in Ohio, both were great athletes that would have fit in our program just like my daughter and other nieces have! I would also have liked to coached my son Connor in high school because he understood playing at 100 percent at all times!