Looking Back at Kentucky School for the Deaf, Jan. 28 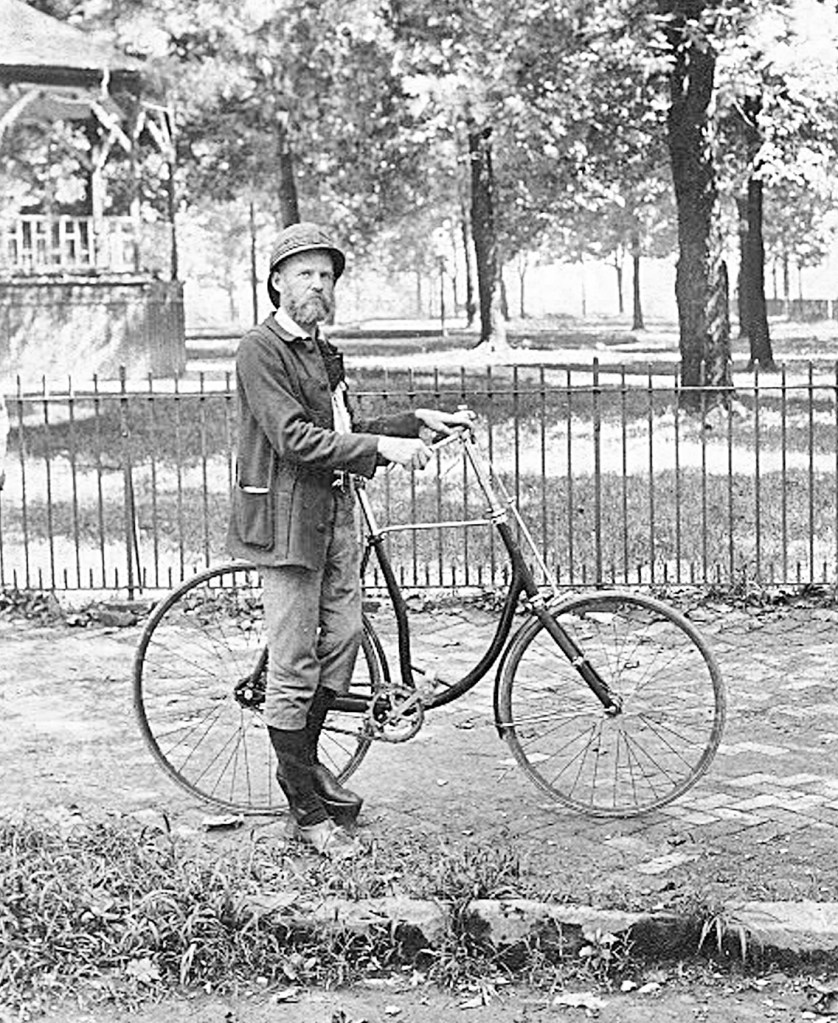 Frank Christman, an important figure at the Institution, was born in Germany on February 14, 1861. He came to the U.S as an infant and became deaf at the age of nine after contracting measles. Frank was a pupil at the Kentucky Institution from 1874 to 1881. He worked in printing from 1881 to 1887. Frank returned to the Institution as supervisor of boys and frequently as a teacher both in the Colored the White Departments. He died in 1948 at the home of Henry Lausman, the school gardener. Frank was an early and avid cyclist and cycled on the roads and lanes of the Bluegrass with his colleague and good friend, William Blount, a fellow teacher in the Colored Department.

The boys and girls were glad to see the snow. The boys have several sleds and every evening after work is over, they pull one another down the pavement from the boys’ building to the back gate. The sleds often turn over and throw them out, but they do not mind it.

La Grippe is abroad in the land and there have been a great many cases in Danville. Our Institution has had its share, in fact a little more than an equitable division would give us, but the holiday pleasures seemed to act as a tonic to assist the pupils toward a speedy recovery. School reopened on Jan. 4th with only two or three pupils missing from their places on this account.

The mercury took a downward drop the early part of the week and Thursday was the coldest day of the year, many thermometers marking as low as 4 degrees above zero. Our boys enjoyed it though, as it afforded them the first skating they have had for two or three years. There were about three inches of snow on the ground for several days and the sleds were gotten out and the way they flew down the pavement from the steps of the boys’ building to the back gate was highly edifying but rather perilous for pedestrians. We succeeded in harvesting a crop of ice about three inches thick, the first time that we have been able to fill our ice-house for several years. 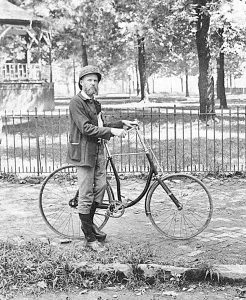 Mr. Christman, little boys’ Supervisor, had an experience last week that came near ending in a tragedy. He had been suffering with la grippe for several days and on the 4th, feeling quite unwell, he went to his mantel where he kept some medicine and took a dose of what he supposed to be grip antidote. It was almost dark at the time and he did not look at the bottle, but as soon as he had swallowed the stuff he discovered his mistake. On investigation he was horrified to discover that he had taken a big dose of poison. He at once summoned aid and emetics were administered which soon brought relief. It seems that his room had been cleaned that day and the servant had changed the arrangement of the bottles on the mantel, and the darkness prevented him from noticing the change. He was a little sore for a day or two and had to stand some good-natured banter about disappointment in love, etc., but found consolation in the fact that the dose totally eradicated the grip. 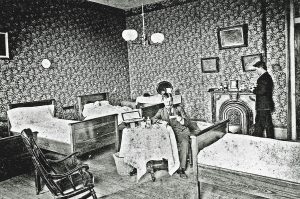 A heavy sleet lasting for many hours fell the early part of the week, and coated everything with ice. The branches of the trees are trailing the ground; the tall elms are bent over beneath their unaccustomed weight till their tops almost touch the ground and the telegraph and telephone wires are nearly all down. When the sun shines, the scene reminds one of the palace of Aladdin or of some cave of jewels in fairy land, but pity for the trees interferes greatly with our enjoyment of the scene. Pedestrians find locomotion a difficult and perilous business, nearly everybody preferring to take the middle of the street to trusting themselves to the treacherous sidewalk.

Ad appearing on last page of each issue for 1892

Contains One Hundred Recipes for Making delicious Candy cheaply and quickly at home. The book is given away at drug and general stores.

are broken down from overwork or household cares BROWNS’ IRON BITTERS rebuilds the system, aids digestion, removes excess of bile and cures malaria. Get the genuine. Genuine has trade mark and crossed red lines on wrapper.

Our school has its own electric light plant, but at 9:15 o’clock, p.m. at which hour all the pupils are expected to retire, it shuts down and the current of the Danville Electric Light Co. is switched on for the night, this arrangement being cheaper than to run our own plant all night to furnish the small amount of electricity needed. But during the heavy downpour of last Wednesday night the plant of the Electric Light Company was flooded and all lights in town went out shortly after midnight. The ancient gaslights were called into service once more for the balance of the night, and Thursday night, Engineer Simpson ran our plant for the night. By Friday the Company management had completed repairs and the night service to this school was resumed.

The most snow in years fell last week and was accompanied by zero weather that caused much suffering. The snow is twenty inches deep on a level and with drifts deep enough to be respectable even in the arctic circle. The teachers who live out had a time of it for a day or two getting to school before pavements were cleaned and roads cleared. All were on time, however, and found occasion for much merriment in their unusual experiences. The boys and girls are, of course, enjoying the- snow and the boys have a great fort in the northwest corner of their playground where warm battles take place daily. The “oldest inhabitant” cannot remember a heavier snow fall in this section.

The epidemic of measles has thinned the classes in the primary department, but the majority of the older pupils had already served their turn as “measles material” so the classes in the intermediate and advanced departments have been but little affected by the epidemic. As we go to press, we have about fifty cases of measles at our school. This disease has been unusually prevalent in the State this winter, and we have been taking special precautions against the infection here, but without avail. Two or three cases have been discovered since the beginning of winter and these were isolated and recoveries without a spread were made, but the disease has finally got a foothold and reached the epidemic stage. Fortunately the disease is of a mild type and yields readily to treatment. Our hospital staff is giving the little ones the very best of care and it ought to be a satisfaction to parents to feel that if their children must have the disease, they are where they will be so carefully looked after.

Danville is now being served by a modern bus line which covers practically the whole city and surrounding suburbs. The line is named the Victory Bus Line and is owned by Mr. Walter Dunn, a member of our Board of Commissioners. Mr. Dunn is one of Danville’s outstanding business men and his establishing of this means of transportation at this time is an example of his foresight and business acumen.

The carpenter boys have made three splendid ping-pong tables for the use of our girls and boys. Indoor tennis is a splendid game to while away spare hours of the long winter evenings. We predict that before long we will have several expert players. How about a tournament in the spring?

Mr. Higgins has collected different hobbies and is displaying them in a room of the School building. The room is called “The Hobby Room” and is near Mr. Beauchamp’s room. It helps us to get ideas for our own hobbies. I collect words in notebooks and pictures in beautiful books from states and from foreign countries as my hobby, and I have 2 road map collections  too.

We will go to see the hobbies in this room soon, perhaps. I have 41 road and county maps, 85 books, 39 postcards with pictures of states and foreign countries. I have a total of 165 hobby items.

THE DEAF OFFER THEIR SERVICE

“Our trained hands, keen eyes and minds are available and are hereby offered for service in your defense program subject to removal of senseless restrictions imposed on handicapped groups.

“We can substitute for many called to bear arms. Paint is applied with a brush, not with ears.”

—Telegram to President Roosevelt from Dr. T. L. Anderson, President of the National Association of the Deaf.

The beautiful Indian Summer weather of the fall and early winter ended January 3rd when a deep snow blanketed almost the entire state. It was followed by a cold spell that sent the mercury down below the zero mark several times. Many water pipes were frozen, and lots of people were cold, but no home in Danville was without a fire. Most of our pupils who went home for Christmas got back before the snow came. Those who didn’t were snowbound and dropped in one by one for days afterward.