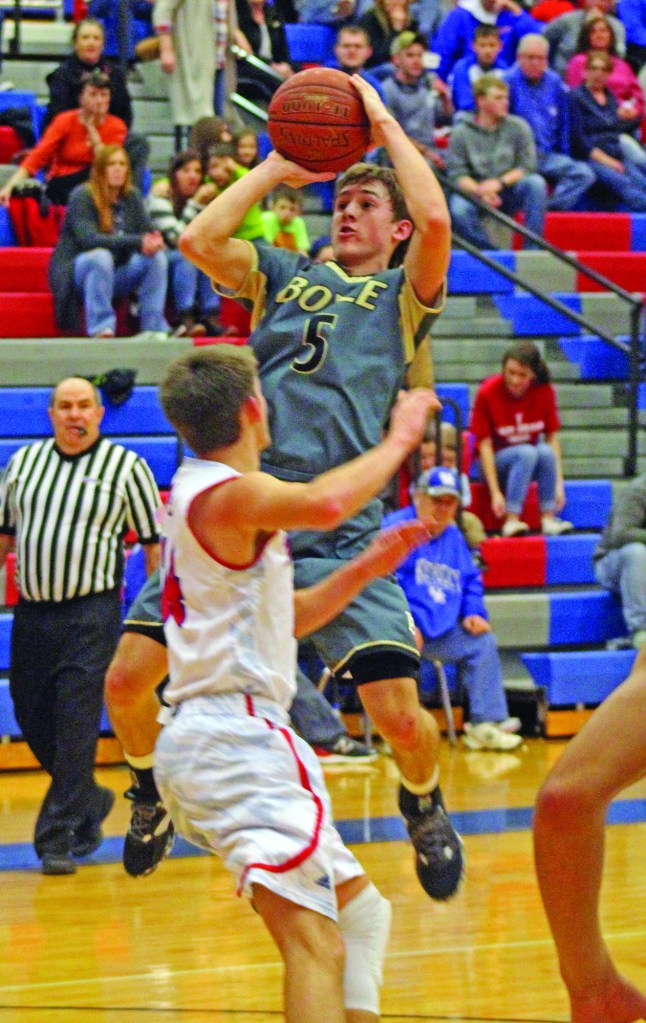 HARRODSBURG – This was not the same Boyle County team that lost to Mercer County a month ago, and this was certainly not the same game.

The maturation of a young Boyle boys team was manifested Tuesday night in its 78-76 victory over Mercer, which had manhandled the Rebels 35 days earlier in the same gymnasium.

The Rebels fell behind 29-6 in the first quarter and lost 83-62 to the Titans on Dec. 21 in the semifinal round of Mercer’s Christmas tournament. This time around, Boyle took control of the game in the early going and held off one Mercer rally after another for its latest quality win, one that illustrated just how far they have come since losing seven of their first 11 games.

“We aren’t the same team we were then,” Boyle guard Jason Alexander said. “I think we’ve improved a lot, and it showed tonight.”

One area in which it showed was the turnover total. Boyle turned the ball over 28 times in its first meeting with Mercer, but only 11 times in the rematch.

“We are getting better,” Boyle coach Steve Adams said. “We’ve still got a ways to go, but we took care of the ball, we executed offensively, we’re sharing the ball. And the kids’ effort coming into this environment against a really nice team, they did a great job.”

Alexander scored 19 points to lead four players in double figures for Boyle (12-9), which has won four straight games and eight of its last 10.

“You can tell we’re growing,” Alexander said. “Even though we lost to Lincoln (two weeks earlier), I think since that game we’ve become closer and we’ve jelled. We’re playing together as one, and good things are happening.”

Good things happened right from the start for the Rebels, who opened a 9-4 lead and used a 12-2 run that featured seven points by Reese Smith to take their largest lead at 23-10 with 6:21 remaining in the first half.

Mercer quickly got back in the game, however, and neither team led by more than three points from the midpoint of the second quarter until Boyle a three-point play by Grant Hotchkiss with 3:52 to play gave the Rebels the lead for good and a layup by Alexander made it 64-60 with 2:50 left.

Boyle answered two free throws by Trevon Faulkner, who scored 40 points for Mercer (16-4), with a three-point play by Smith to take a 67-62 lead with 2:02 left, and the Rebels made nine of 10 free throws in the final minute to keep the Titans at bay.

“You’ve got to give them all the credit in the world, because those kids made plays, and they played their hearts out,” Mercer coach Kurt Young said. “You look at their scores, you watch film on them, you see how their young guys are progressing … and you’ve got to give their guys credit. They did everything they needed to do to win that game. I don’t think we did, but maybe we’ll get another chance at them come regional tournament time, and both of us will be excited because we’d be playing in the regional tournament.”

Faulkner reached 40 points for the second time in five games – he was 16 for 19 at the free-throw line – and Gunnar Gillis added 20 for Mercer (16-4), but only three of their teammates scored and none had more than six points as the Titans’ seven-game winning streak was snapped.

Adams said Boyle’s game plan was much the same as when it met Mercer the first time.

“We’ve just gotten better,” he said. “We didn’t do anything different. The kids are just getting better and believing in each other … and what we’re trying to do.”

Bryce Slone scored 16 points and Smith and Hotchkiss added 14 each for Boyle.

Alexander finished 6 for 8 from the field, and Hotchkiss was 5 for 7 for the Rebels, who shot 56 percent from the field. They were 14 for 22 from the field and 14 for 15 at the foul line in the second half. 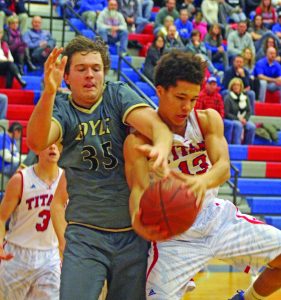 Will Bramel, left, of Boyle County and Aaron Johnson of Mercer County battle for a rebound during the second quarter of Boyle’s 78-76 victory Tuesday.

Mercer took its first lead at 26-25 on a Rhyan Lanham 3-pointer with 2:39 left in the first half, though Boyle went back in front 22 seconds later.

Faulkner scored five straight points early in the third quarter to put Mercer up 39-37, and the lead changed hands 12 times in the second half before Boyle put the game away.

Faulkner was 11 for 21 and Gillis was 8 for 11 from the field for the Titans, who have little time to dwell on this loss with a game tonight at Burgin.

“Come tournament time, no one’s going to remember this game. … The bottom line is we have to learn from it,” Young said. “The great thing is, we didn’t play well and we still had a chance.”