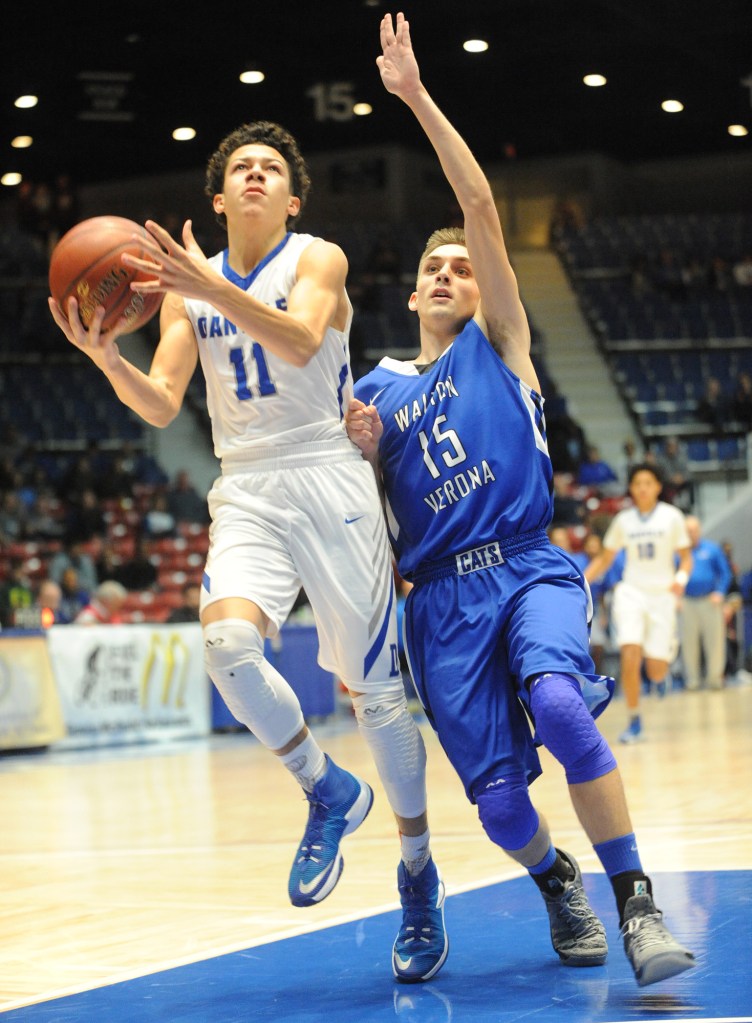 Matt Overing/matthew.overing Danville's Tanner Ford drives to the basket for two of his team-high 11 points in Thursday's loss to Walton-Verona in the All "A" state tournament at Frankfort.

FRANKFORT — Danville’s offense couldn’t make its mark in the first round of the All “A” Classic boys basketball state tournament against Walton-Verona.

The Bearcats kept the pace to a crawl, holding the Ads’ offense in check in a 46-33 win.

Danville held Walton-Verona to just two field goals (2-of-10 shooting) in the second half, but Walton-Verona hit 17-of-25 free throws to put the game away.

Miles, listed at 6-feet 8, forced Danville to take contested shots in the paint. When those shots didn’t fall, the Ads turned to the outside, but couldn’t find the right range, finishing 5-for-21 from deep.

“These kids had never really been in that situation, that depth perception, sometimes it’s hard to find the basket,” McKinney said. “If you haven’t played a lot, plus it’s a big stage. It feels like a big stage.”

Danville had a 12-10 lead after one quarter and trailed just 24-22 at halftime behind nine points from DeShaud St. Martin. St. Martin was 3-for-7 from deep in the first half but scored just one point in the second half. 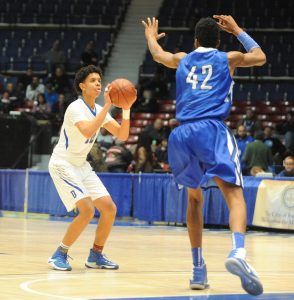 McKinney praised St. Martin’s defense on Miles, who went 1-for-6 from the field.

“I thought Shaud really held up nicely against him,” the coach said. “He battled him.”

Danville was led by Tanner Ford’s 11 points. St. Martin finished with 10 points, Jared Southerland had seven points, Tevin Kavanaugh had three and Jaleel Warren had two points. The Ads finished 11-of-45 from the field, with most shots being contested near the rim.

“We needed to drive, and we had to get around (Miles),” McKinney said. “He makes it hard because you almost want to shoot (3-pointers). We talk all the time, the shot you don’t want is a challenged two. We want a layup, drive, spot-up 3. We want other teams to shoot the challenged two. Against them, it’s what you need to do to win.

“But I thought we played hard. We gave up two field goals in the second half. They just play at their pace.”

The Ads finished with just eight turnovers, one of their best marks of the season in that category. McKinney liked the ball security but said his team may need to take more risks in the future.

“Some people might say we need to turn it over more and try and push it, maybe we’re working on too much ball security,” McKinney said. “Maybe we need to get it out and take more chances. That’s something to think about. We only had eight turnovers, we only had 33 points.”

All “A” Classic first round