Herbert “Rip” Waters, 88, of Danville died January 22, 2017. He was the husband of Barbara DeChristopher Waters. Born February 28, 1928 in Calhoun County, Alabama to the late William and Dessie Henderson Waters. 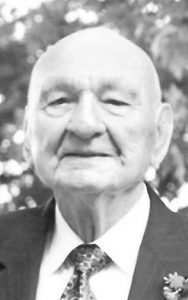 Rip completed his undergraduate degree from Auburn University, his masters degree in mechanical engineering from University of Illinois, and was a 1st Lieutenant in the United States Air Force during the Korean War before working locally and abroad for Firestone. In 1971, Rip was granted three U.S. Patents for Firestone that are still being used by the company today.

Through work and for pleasure he and his wife enjoyed traveling the world. He was a member of The Presbyterian Church, an honorable Kentucky Colonel, and a former member of the Danville Rotary Club.

Rip was predeceased by a son, H. Randall Waters and nine siblings.

He is survived by his wife, Barbara of 65 years and two sons, Christopher R. Waters of Greenville, South Carolina, and Jonathan (Sandy) Waters of Danville, five grandchildren, and six great grandchildren.

A memorial service will be 3 p.m., Saturday at The Presbyterian Church with Rev. James Stewart officiating. The family will receive friends in the fellowship hall following the service.

Memorial donations are suggested to Heritage Hospice. Online guestbook is available at www.stithfuneralhome.net