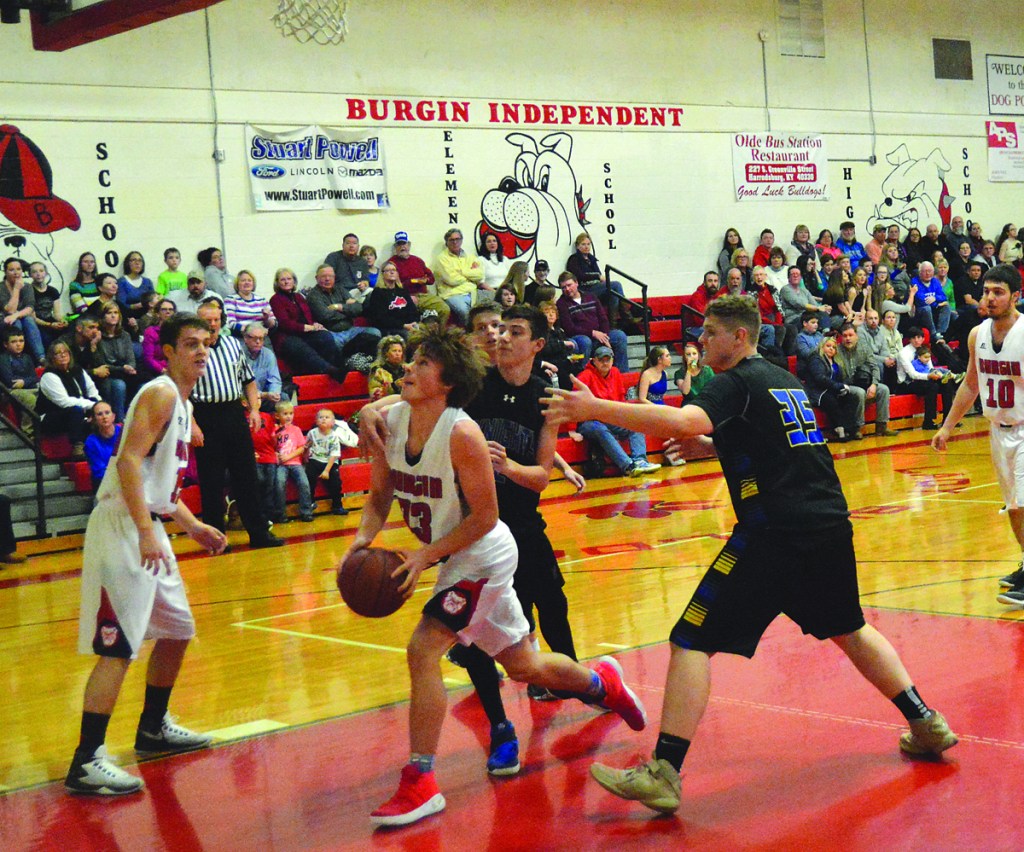 BURGIN — For once, Burgin was on the right side of the running clock.

The Burgin boys enjoyed a rare cakewalk Friday night as they pummeled Piarist 73-29 in their homecoming game.

The host Bulldogs have found themselves in a number of close games and the occasional running-clock game in which they were on the wrong side of the scoreboard, but this time they were the ones on top as the clock ran continuously for most of the second half.

They scored 27 of the game’s first 30 points, and their lead reached the 35-point mark required to trigger the mercy rule for the first time this season when they scored the first six points of the third quarter.

“We’ve been in dogfights every night, except for when we were on the other end of the (mercy rule Wednesday) against Mercer County,” Burgin coach Don Irvine said. “So coming off a game like that against your county opponent, yes, it was really needed mentally, if nothing else.”

Jordan Hurst led Burgin (9-11) with 29 points and 11 rebounds, and he said the margin of victory wasn’t the only good thing about this game.

“It feels good, but it feels good knowing that the team’s playing well. Everybody’s scoring and everybody’s playing great, so that’s the real good feeling of this.”

There was another benefit, too. The Bulldogs were scheduled to return to the court less than 15 hours after Friday’s game ended to face Middlesboro on Saturday afternoon.

“We got to rest some guys, and they didn’t have to tax themselves, so hopefully it’s a good, positive thing for us,” Irvine said.

Hurst scored 15 of his team’s first 22 points as Burgin opened the game scored 15 unanswered points to open an 18-2 lead and stretched it to 27-3 with another eight in a row late in the first quarter.

The Bulldogs’ lead reached 42-11 midway through the second quarter, and they pulled out to a 50-15 lead that started the running clock with 5:14 left in the third quarter.

Eleven different players scored for Burgin, with Micah Dunn and Phillip Hockensmith getting seven points each and Spencer Moore getting six. Hockensmith also had 10 rebounds for the Bulldogs, who outrebounded the Knights 58-27.

Hurst said the Bulldogs did two things particularly well that they have been working on.

“Finishing the basketball and shooting a better free-throw percentage,” he said.

Piarist (1-18), a Johnson County parochial school that brought only six players to the game, opened 2 for 14 from the field in the first quarter and finished at 21 percent (11 for 52).

Piarist (2-15) led by as many as 10 points in the third quarter. Burgin rallied to within two points and had the ball in the closing seconds but couldn’t get a shot off that would have tied the game.