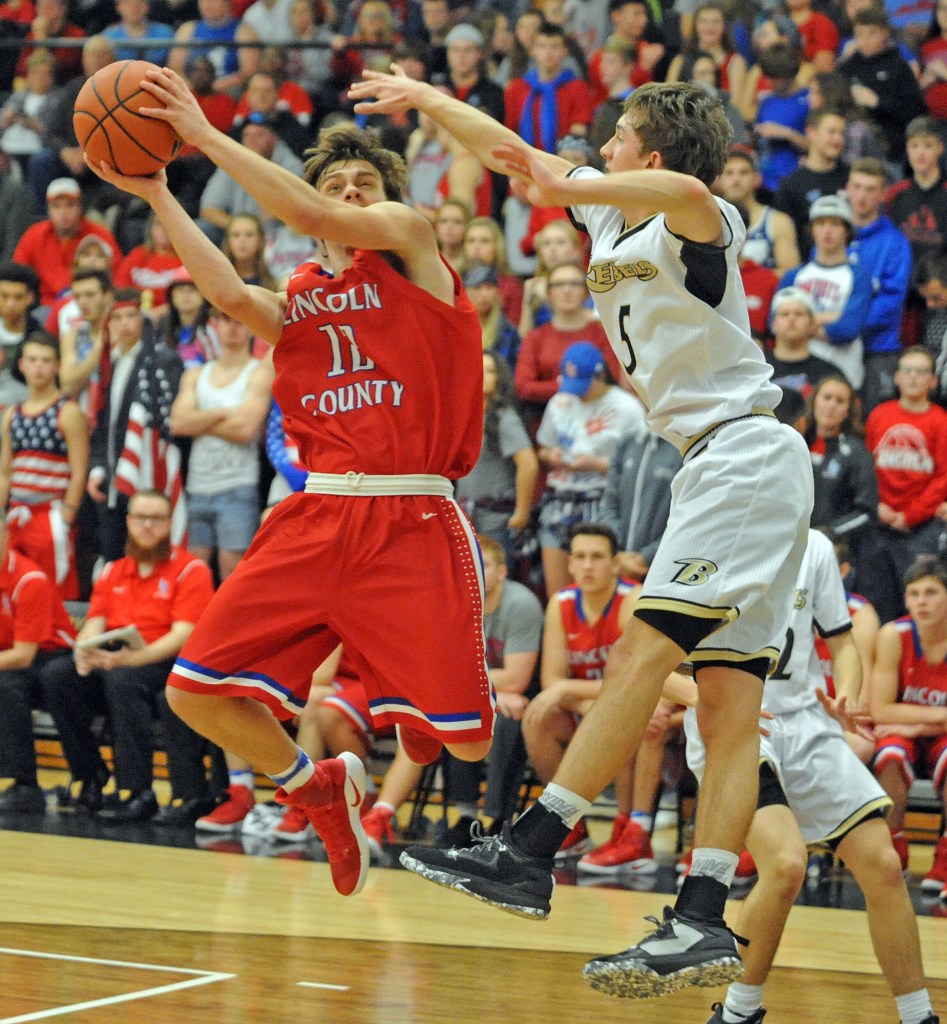 Lincoln County boys basketball is in a familiar position in the 45th District: First.

The Patriots beat Boyle County 59-56 Friday to take a commanding 4-0 district record. Noah Young scored 30 points to lead all scorers. He was the only player to play all 32 minutes.

“It was just another typical Lincoln County, Boyle County game,” Lincoln coach Jeff Jackson said. “It was a great crowd, great atmosphere. The first game between the girls was a classic. Before we hit the floor, we told the kids that there’s a lot of energy out there.”

Lincoln opened strong from the floor behind senior Carlos Nunez, who hit a 3-pointer and scored seven points in the first half. The Patriots led 13-6, the largest lead of the first half, before Boyle cut the lead to 13-9 after one quarter.

“I thought Carlos played really well. He’s a great leader,” Jackson said. “We feel like we’re getting everything that Carlos has to give us, and that’s all you can ask from your kids. Lay it on the line. Our senior class is pretty close. They’ve done a really good job with the leadership part.”

Boyle struggled to break down the Patriots’ zone for the second time this season. But the Rebels fought back in the fourth quarter in an electric atmosphere.

“That’s what you try to get ready for,” Adams said. “We’ve had a good little run here, maybe we were just due. We just didn’t attack gaps when we moved the basketball. We stood, pounded the ball and went side to side. You can’t do that against a 2-3 zone.”

Lincoln’s zone caused problems for the Boyle offense again, with the Rebels going 18-of-39 from the field and 3-of-13 from 3-point range. Jason Alexander led the Rebels with 19 points, Reese Smith had 18 and Bryce Slone had 11.

“We all just played OK,” Adams said. “Maybe we were a little tired, I don’t know how you can be tired, but we’ve had a nice run here. Maybe it was the atmosphere, the girls game going into overtime, the homecoming, all those activities. Maybe we were distracted. We just didn’t play well. We just have to regroup.”

Lincoln led by as many as 10 points in the fourth quarter, but Boyle rallied. Jackson said that was in part due to his team making key errors late in the game.

“I thought we did a lot of things we needed to do, but we’ve got to do a better job execution-wise, and we’ve got to make free throws,” he said. “We were in a situation, making one of two, and we need to be making two of two. But we got a stop at the end. I’m just proud of our kids, it was a good win for us.”

Boyle had a chance to tie the game with under 10 seconds to play, but Slone’s desperation attempt went wide at the buzzer.