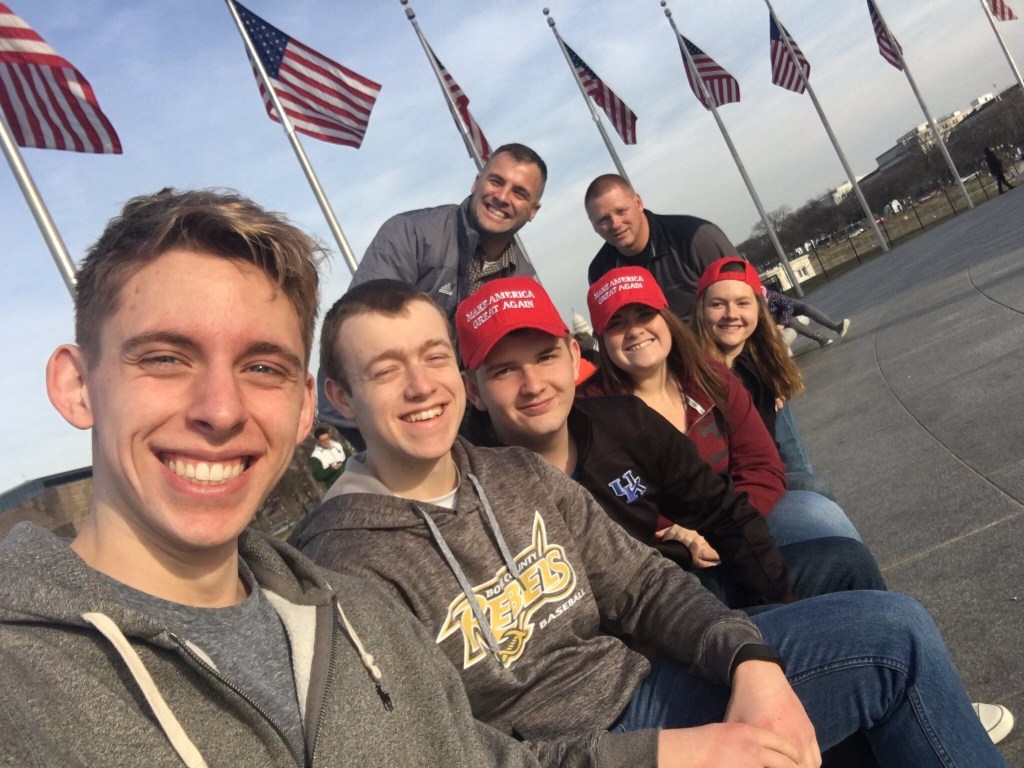 As Donald Trump was sworn in as the 45th president of the United States on Jan. 20, hundreds of thousands of people filled the National Mall and millions more watched on their televisions across the country.

In the midst of the crowd were some local residents who made their way to the nation’s capital to witness history in the making.

The Advocate-Messenger heard from quite a few people who attended the inauguration. Here are the stories from a few who wanted to share their experiences:

Around 30 Boyle County High School students in teacher Ryan New’s AP Government and Politics Class took a five-day trip to the nation’s capital for the inauguration. 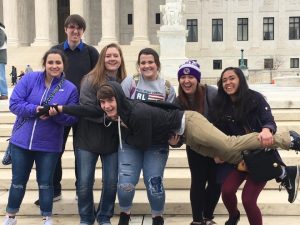 The class began fundraising in November to cut into their costs. They were successful in subsidizing their expenses so each student needed to pay only a few hundred dollars for the trip.

“We were lucky to be able to be there,” student Taylor Whitwell said. “We were close to the Washington Monument.”

Student Collin Cummins said it was a politically charged atmosphere.

“We were watching on the jumbotron, and the moment Trump comes on, people would be screaming ‘MAGA’ or ‘make America great again,’ or when Hillary came on people behind us would chant ‘lock her up,’” Cummins said.

While in D.C., the students also visited the office of their U.S. representative, Brett Guthrie, who gave them a tour of his office.

“That was one thing that I really enjoyed,” Whitwell said.

The students also got to witness the Women’s March on Washington, D.C., the day after the inauguration.

McKinley Rush said taking the city’s Metro trains that day was intense because there were so many people using them.

“You were sort of forced to talk to other people because they were so close to you,” she said.

Rush said she was impressed at the variety of causes represented in the march.

“It wasn’t just about women’s rights or their views on Trump, it was about the environment and equal rights …” she said. “It was cool to see people come together not just for women but for everything.”

While a majority of the class had been to Washington before, it was the first time for Smith.

“I didn’t expect to enjoy Washington, D.C., as much as we did because I thought it was just going to be big political buildings,” she said. “But we got to enjoy the true beauty of the city and it was amazing.”

Many in the class agreed they liked seeing people from different ends of the political spectrum all showing passionate patriotism. People may disagree on their politics, but those at the inauguration and those at the Women’s March all seemed to be proud to be American, they said.

Elias Delbridge of Perryville traveled to Washington with his girlfriend, her parents and some other people from Barren County.

Delbridge, who lives in Perryville and plays in a gospel music group called the Kentucky Pluckers, said one of his favorite moments of the trip happened the day before the inauguration, when they got to see a motorcade with Donald Trump pass by. They were maybe 20 feet from the president-elect at the closest moment, he said. 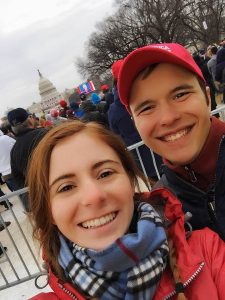 Photo submitted
Elias Delbridge of Perryville, right, and Lea Sewell of Glasgow stand at the inauguration.

For the actual inauguration, they had tickets in Section C — “as far back as you can get ticket-wise,” he said.

“We got up at about 4 in the morning because we were staying in Virginia,” he said.

There was a ton of security as they approached the mall, and they all had to go through a security checkpoint before reaching their destination. But once there, the atmosphere was electric, Delbridge said.

“Everybody had the red hats on. I had mine on. Everybody was just super excited and happy,” he said.

Large numbers of people crowding together and bad weather might be a recipe for unhappiness, but in this case, everyone was still happy, he said.

“We stood out there for about three hours waiting for the inauguration and it was freezing cold,” he said. “Finally, the band started playing … so then they started slowly — it seemed like it took forever — they had the senators and stuff, they were announcing all the congressmen and all the big wigs.”

“They announced Bill Clinton and Hillary and George Bush and all the former presidents. Finally, we started getting close — they had Trump’s cabinet come out,” Delbridge said. “I felt bad for Hillary a little bit because she went out there and where we were in our section, everyone started booing. It was crazy; I wasn’t expecting that. … Every time a Democrat would go on the screen, the whole place would erupt with a big old ‘boo.’ It was crazy.”

Delbridge said he got to visit the Smithsonian Museum and Arlington National Cemetery while he was in D.C.

The inauguration was an impressive event he won’t soon forget.

“It was quite an honor just to experience that and just to witness history in the making right there,” he said. “It’s really neat to be able to see it on TV now and know, ‘hey, I was out there in the crowd.’”

Five Boyle County 4-H students attended the inauguration as the culmination of a year-long study in American government.

“I’m still processing it. The inauguration itself — just to be there … It was pretty cool just to be there. It was historical,” said Delaney Simpson. “It was really cool to see opposing views: There were protestors, supporters; it was cool to be around all of that.” 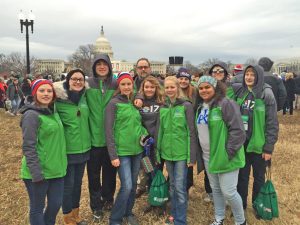 Simpson, Lyndsey Bell, Tyler Mattingly, Dora Swann and Landry Woodrum signed up a year ago to go on the trip, joining about 500 other 4-H students from around the country for the first-ever “Citizenship Washington Focus: Presidential Inauguration” event. They were housed at the National 4-H Center in Alexandria.

Students left on Sunday, Jan. 15, and returned on Saturday, Jan. 21. They stopped at Monticello, Montpelier, and Mount Vernon along the way, spending the rest of their week attending workshops, touring historic sites and museums and soaking up the experience of being in Washington D.C. for a presidential inauguration.

The Newseum was one of the museums they visited, said 4-H Agent Kim Ragland. Students had the opportunity to see an exhibit about the Berlin Wall there that included a piece of the original wall.

The students were interviewed by Channel One News, which is a digital content provider for schools across the country.

“The kids really enjoyed it. It was fun,” Ragland said.

While being interviewed, the students met Georgia state troopers who had been sent to help with the inauguration parade.

“The kids acted like they were rock stars. Shook their hands, thanked them for their service, acted polite and kind. The troopers responded in kind,” she said.

The students were given key chains, patches and a variety of other things.

“They wound up having their pictures made with the troopers,” she said. “That was just a random event, there was no way of predicting that.”

Ragland said she was proud of how well the children treated the officers.

“It was very touching and I was just so proud of them,” she said.

Packing was tricky, students said, because the girls had to take ball gowns and the guys had to have clothes for an inauguration ball they all attended on a yacht in the Potomac River. It was a great experience, Simpson said, and a lot of fun.

All approximately 500 students who were part of the 4-H trip attended the ball on the yacht, which had three floors. The ball included a meal and dancing. During the ball, they also elected the president of the “Citizenship Washington Focus: Presidential Inauguration” event — and it was Landry Woodrum from Boyle County. He is 14 and the youngest of the candidates running at the event, which included students aged 14-18.

Ragland, Woodrum’s mom, said she was proud of how well he had done and said she wouldn’t be surprised to see him follow a path into politics.

“The most important part of that for him, I think, was, at 14, he realized he has a talent for this and he enjoyed it,” Ragland said.

For Tyler Mattingly, another student who attended, simply being in Washington D.C. was an experience.

“You pass by important buildings without noticing. We were on our tour and someone was like, ‘Hey, look, there’s the Pentagon.’ We all looked out the window to see it. And it’s like, ‘I’ve heard about that my whole life,’” Mattingly said.

“It’s so cool to have so many important things in one place,” he said.

They were up in the ticketed area during the inauguration, with a full view of the proceedings, Ragland said, but it was in the distance. They were able to see giant screens for a closer view.

Mattingly likened the experience to being at Disneyland, “but more official.”

“I’ve heard about this place my whole life, but now I’m here. It was a fantastic experience,” he said.

They left before the parade, having been there since 8 a.m., Ragland said.

“By that time we were hearing the roars behind us from the Mall from where the riots were happening. We as (4-H) agents knew it was happening, but the kids, not so much. We asked them to stay off their phones that day,” she said. “We figured it was the safest thing to get out of there.”

The students did not see the rioting during the inauguration, because they were well away from that area. But, Simpson said, they had passed the same area many times during the week — she remembered seeing the Bank of America and the Starbucks that were damaged on a few occasions.

Students did see the protesting during the event, and while they didn’t see riots, some of the protestors were less than peaceful, they said. During the inauguration itself, people were booing when individuals appeared on the screen whom they didn’t like, such as when Democrat Chuck Schumer spoke.

“My opinion of it is the fact that no one was in the right, unfortunately … I can only guess it was the Republicans who booed when Democrats came out and they were the resounding sound,” Mattingly said. “(Schumer) gave a really good speech and it wasn’t about politics or Republicans or Democrats. It was about unity. He read the letter of a Civil War soldier the day before he died. It was very, very powerful and it was overshadowed by the fact that he was a Democrat.

“If Democrats were kind and not rioting in the streets, you could say, ‘well, those Republicans are just not in with the times.’ It’s one of those things that … No one’s in the right anymore, because everyone’s in the wrong.”

“It impressed me that a group of 14-18 year olds knew bad behavior when they saw it,” Ragland said. “They were kind, respectful, and realizing that it takes all of us to run the country. And we should be respectful of one another. That was one thing I was most proud of — they were respectful of each other and they could recognize bad behavior on either side and call it out.”