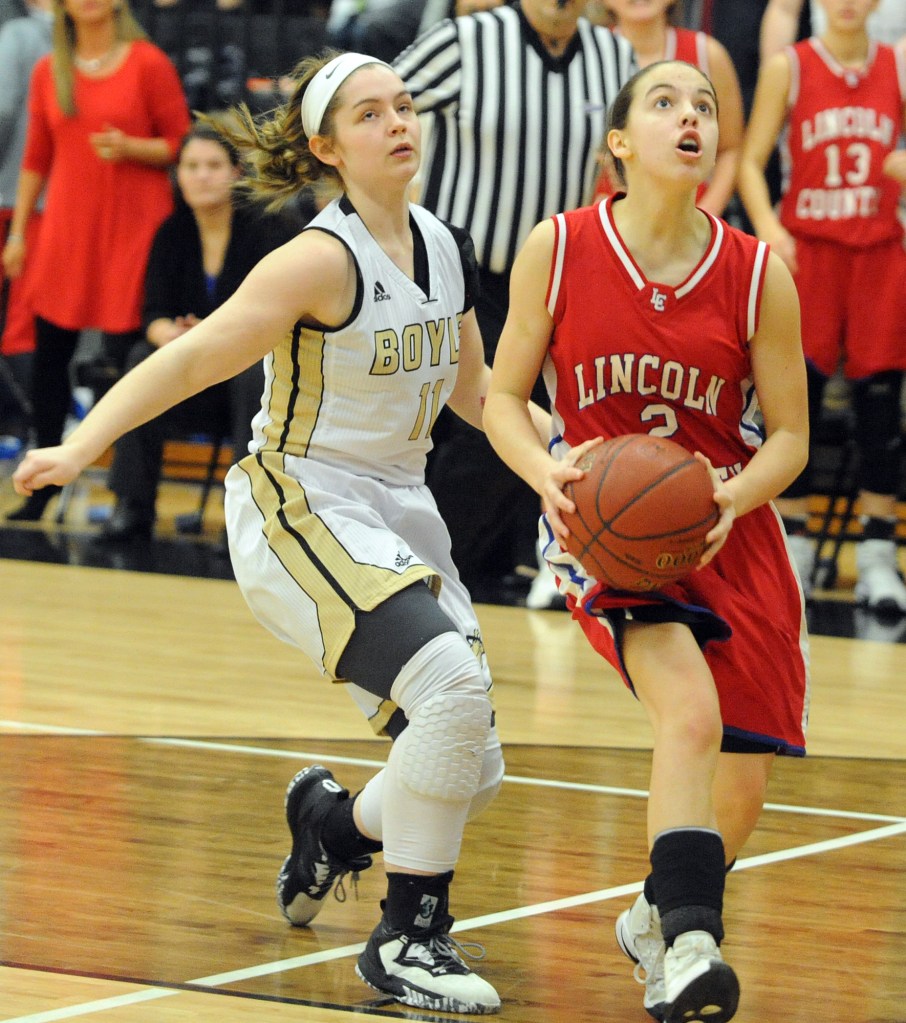 The Lincoln County girls basketball team is proof that it doesn’t matter how long you lead in regulation, if at all, as long as your team is ahead at the sound of the final horn.

It was down to the wire before Lincoln escaped with a 112-110 overtime victory over host Boyle County Friday night. The Patriots never led in the 32 minutes of regulation, but they went on a 33-21 tear in the fourth quarter to rally from a 12-point deficit to force overtime.

“One word that keeps popping in my mind is resiliency,” Lincoln coach Cassandra McWhorter said. “We’re down pretty much the whole game going into the fourth quarter and we outscore them 33-21 to tie the game. When we got the tie, I felt momentum shifting. We were in foul trouble most of the night and trying to rotate and do some things. But resiliency. I’m so proud of the kids right now. They never gave up. They never stopped believing.

“That has to be the highest scoring high school girls’ game that I’ve been a part of and maybe even the whole state of Kentucky.”

And right she is. The combined score of 222 points is the highest combined girls basketball score in state history. The previous high was 210, set by Scott County and Fern Creek in 2007. Lincoln’s 112 points ties the team for the 10th highest score in the state’s history.

“I’ve been in a lot of games but that probably ranks among the top 10 of games I’ve ever been involved with as far as back-and-forth,” Boyle coach Greg Edwards said. “It was like a heavyweight match, both teams getting their shots in.”

With Lincoln (15-5, 3-1 45th District) trailing by two with 3.3 seconds to play, Maddy Boyle picked off the inbounds pass of Boyle’s Keely Bowling and drove baseline for a shot. Boyle missed the shot attempt but she was fouled by Emmie Harris and she calmly stepped to the foul line and sank both free throws to even the game at 91-all and send it into overtime.

“I thought we had a good block there at the end of the game, but they call it,” Edwards said. “Give Maddy Boyle credit. She stepped up there and made both free throws to send the game to overtime.”

Haley Southerland hit the first bucket of the overtime for Lincoln’s first lead of the night. Harris, who led Boyle with 31 points, answered with a three-point play and Bowling drained a 3-pointer to help the  Rebels retake a 97-95 lead. But Southerland came back with her own three-point play to put Lincoln on top to stay, 98-97.

Following a Jenna King layup and three-point plays by both Kaitlynn Wilks and Southerland, Lincoln posted its biggest lead of the night, 108-103, with 40.8 seconds left in OT.

“I told our team (after leading all of regulation). We’ve fought the whole game here. Now it’s’ overtime and we’ve got to pick up where we left off and try to keep making plays. We did make plays. They just made one more.”

McWhorter said she never questioned her team’s fight in the district matchup.

“I never gave up on them,” she said. “Even when we were down with 3.3 seconds to go in regulation. I told the girls on the sideline, ‘When we get this stop, do not go on the floor so we get a technical.’ I never doubted that we’d lose this game.

I think it showed in the kids that they never doubted during moments when we had our backs against the wall — resiliency.”

A quartet of scorers in 20-plus double-figures paced Lincoln in its sixth straight win. Emma King scored a team-high 31 points. She also had six rebounds and four assists. Southerland registered a double-double with 27 points and 10 rebounds, Kaitlynn Wilks poured in 22 points and grabbed six boards and Boyle had 20 points with six assists and five steals.

Southerland, who came off the bench to post her double-double, scored 15 of her 27 points in Lincoln’s comeback run over the fourth quarter and overtime period. Boyle scored half of her 20 points in the same time frame, including back-to-back steals and layups to spark the  Patriots’ fourth-quarter run.

“I’ve been waiting for her to come out all year,” McWhorter said of Southerland. “Haley is so capable and she’s so athletic. For her to have a game like she did tonight in a big district game against a big rival is such a confidence boost. She was big on the offensive glass and she finished shots around the rim.”

“Then you had Maddy stepping up on defense. She had the saving steal, she stripped (ball) a couple times. I thought early she kept us in the game. She attacked and made that nice little move in the fourth early to get off balance to get us going. And she made some passes to get some and-1s late.”

McWhorter fumbled with her words in trying to breakdown the game performance.

“I mean, all players stepped up in all different areas tonight,” she said. “Emma’s attacking the rim and gets her points. Kaitlynn is in foul trouble all night but still ends up in double figures. It’s an amazing team win and I’m so proud of the girls.”

The host  Rebels started hot, sprinting out to a 15-9 lead to begin the game. Gracie Edmiston scored nine of her 15 points in the early going, Danielle Roney, who finished with 17 points, had two buckets and Harris had one.

“Boyle County really came ready to play. I thought our girls did a good job defensively early and I thought we were ready to play, too,” McWhorter said. “But we just missed a lot of easy shots early.

Lincoln was within 19-18 late in the period after a Southerland putback and a Wilks jumper, but Becca Tarter, who had 10 points, hit inside to close the first to make it 21-18.

Boyle led by as many as 11 points in the second quarter and held to a 47-41 lead at the break. Haley Sheperson had a three-point play and Harris, Roney and Tarter had a bucket apiece as the  Rebs posted the 33-22 advantage.

“I told the girls after the game, ‘Look, obviously we’re disappointed that we lost, but we can’t be disappointed with the way we played because I thought we played really good,” Edwards said. “They ( Patriots) are a hard team to keep down. Our district games are always pretty good games so we knew it was going to be hard-fought.”