Calvin L. Whitt, age 88, of Danville, KY, died peacefully on Friday, Jan. 27, 2017, following a brief illness. He was born on Aug. 31, 1928, in Salyersville, KY, and graduated from Eastern Kentucky University in Richmond, with a bachelor’s degree in music education, with additional graduate study in music education at the University of Kentucky. 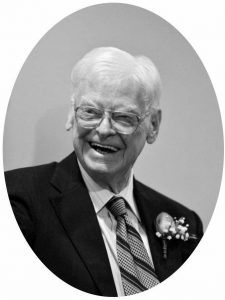 Calvin answered his nation’s call as a member of the US Army 24th Infantry Division Band in which he and his fellow bandsmen performed at the signing of the armistice agreement that ended the Korean War.

A band director for much of his professional life, he launched band programs for the Johnson and Laurel County School Districts, and led band programs for the Paintsville, Jackson and Georgetown Independent Schools and Carter County Schools, all of Kentucky. He was named a “Kentucky Star Teacher” by the Kentucky Department of Education in 1968, presented the “Citation of Service” by the Kentucky Music Educators Association in 2000, and named the EKU Department of Music’s “Outstanding Alumnus” in 2007.

Following retirement as a band director in 1974, he managed Calvin Whitt Insurance in Paintsville, KY, where he became a Top 5 percent agent in the nation for Mutual of Omaha and Massachusetts Mutual. For the past 20 years he and his wife of 58 years, Dora Spears Whitt, formerly of Paintsville, KY, have resided in Danville, KY, where they have been active and faithful members of Lexington Avenue Baptist Church — he as a deacon and both involved in its music ministry.

Always cheerful and quick with an encouraging word and a deep, abiding faith in Jesus Christ, Calvin was devoted to his family as husband, father, granddad, and uncle.

Stith Funeral Home, Danville, is coordinating arrangements. Visitation will be 3-6 p.m. at Lexington Avenue Baptist Church on Tuesday, followed by the funeral service at 6 p.m. Dr. Tommy Valentine and Dr. Bill Fort will officiate. Burial will be noon on Wednesday in Paintsville at Highland Memorial Park Cemetery.

Contributions are suggested to the Robert E. Whitt Christian Memorial Fund via the Kentucky Baptist Foundation or the Robert E. Whitt Excellence in Music Scholarship via the EKU Department of Music. The online guestbook is available at www.stithfuneralhome.net.