Sister — march! Participants in D.C. Women’s March and sister marches speak out about why they went, and what they found out 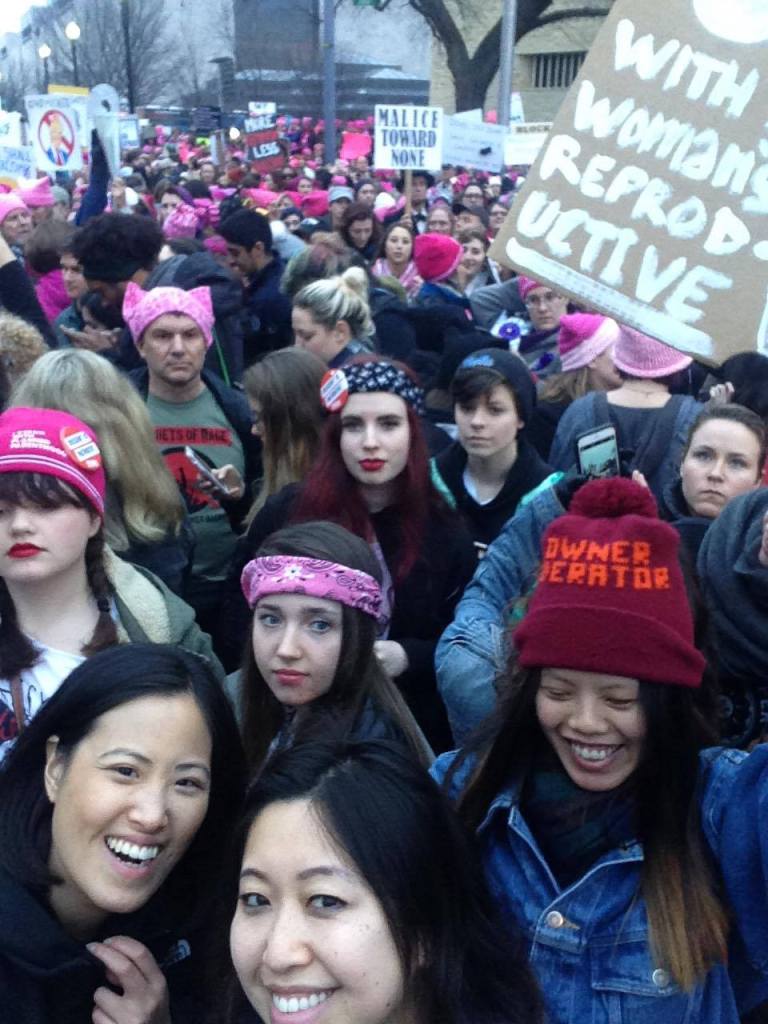 SO YOU KNOW
Want to keep up with the Women’s March movement?
Visit www.womensmarch.com/100/  to find out what the next plans of action are.
Women — and some men — took to the streets Saturday, Jan. 21 for the Women’s March on Washington, D.C. But not only in D.C. Marches were held all around the country — and the world — referred to as Sister Marches to the D.C. gathering. 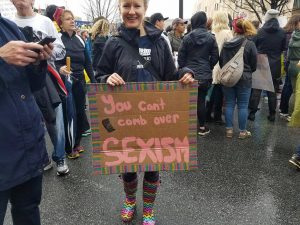 “We went to Atlanta,” says Nicole Harmon of Danville. “There were 63,000 people there, and when we got to the park, we were right in front of the stage. We got some amazing pictures.” 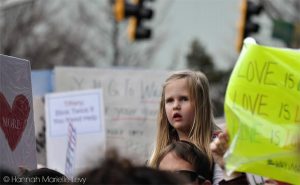 Photo by Hannah Levy at the Atlanta sister march.

Harmon says as far as explaining what the march meant to her — “It felt great to be part of something so big and overwhelming…..especially with peaceful marches all over the country and, in other countries.  In Atlanta, part of the protest was focused on civil rights so we were lucky to hear speakers such as Congressman John Lewis. Overall, it was a wonderful experience and I would definitely do it again.” 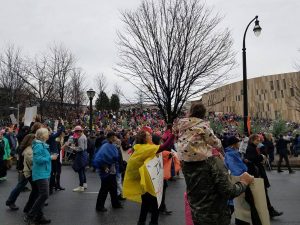 Toni Patton and her daughter, Sarah Taylor, both of Danville went to D.C.
“We had a good time, but it was exhausting and overwhelming,” she says. “The busses and cities were not prepared for this many people so it was unorganized.”
Patton says their bus, along with eight or more others, broke down for various reasons, so they were three and a half hours late and missed the rally with the speakers. 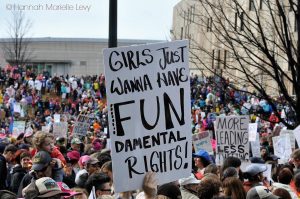 Photo by Hannah Levy at the Atlanta sister march.

“We did make it to the march and it was so packed we couldn’t move down the streets until the police decided to close more roads for us to walk down. They had to shut off many of the Porta-Johns due to over filling so we had lines in public bathrooms like McDonald’s for hours. Some of the businesses locked their bathrooms down. It’s was something to complain about but also be proud that we came in such great numbers that the city couldn’t hold us. What amazed me the most was the welcoming from the city’s residents. They put signs on their lawns quoting MLK Jr and other greats. They came out of their homes cheering us on giving us cookies and opening their homes and bathrooms. I also read that out of the thousands of people marching around the globe only 4 were arrested! I hope that’s true because that’s something to be proud of! It was a very wonderful experience just to be in the present of so many strong women!” 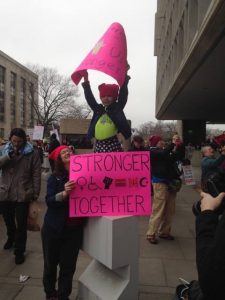 Callie Minks of Danville also braved the bus trip to D.C. I asked her why, as a self-described shy person who is not accustomed to “making a stance” decided to go.
“Last fall, my sons and I were helping someone from our church in her yard, and by accident I literally got my face bashed in by a rake. That pretty much sums up what 2016 felt like for me — try to do good and get your eye blacked. For most of the year I watched the news and was horrified by what I was seeing. Hatefulness, anger and blame spewed from everywhere it seemed, and I was at first dumbfounded and then just really, really sad.  I lost my faith in humanity.  I felt disappointed in America, and by our political and spiritual leaders who either excused away or said nothing, and even by people I love.  It changed me in a way that’s difficult to explain, and so I retreated to the safety of my home, avoiding people and places in what my husband and I refer to as ‘hunkering down.’  There I cried, prayed and licked my wounds until 2017 rolled around, when somewhere deep within me said, ‘Get up. You’re going to be a bad ass this year.’” 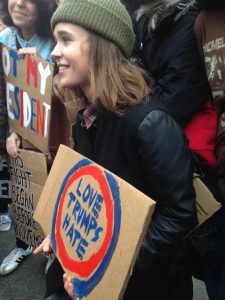 Minks encourages others to follow the Women’s March movement and participate in its 10 actions for this administration’s first 100 days: www.womensmarch.com/100/ with the first action being to send a postcard (your own or one downloadable from the site) to your state senators expressing your concerns.
“First order of business, defy introversion and hatred of crowds by reserving a bus ticket with your best friend to the Women’s March in D.C., which is one of the better decisions of my life.  I was awe-struck by the massive crowd and by the kindness shown from my fellow marchers, police officers, National Guard, and D.C. locals who stood outside their homes to cheer and welcome us to their city.  People from all across the country and all walks of life were there:  women, men, children, elderly, disabled, gay, straight, transgender, Christian, Muslim, Native American, immigrants, black, white an all shades in between, all religions, and backgrounds converged on our capital to say, ‘We matter.’ For the first time in a long while, happy tears filled my eyes.  Over half a million marched on Jan. 21, unknowingly restoring my faith in humanity, by their love, peace and unity with one another, chanting ‘this is what America looks like,’ and it was beautiful.  Maybe I am naive or idealistic to hope America as a whole can live in such peaceful coexistence, but I would much rather choose to believe in goodness and be hit in the face with a rake than to side with bitter divisiveness.” 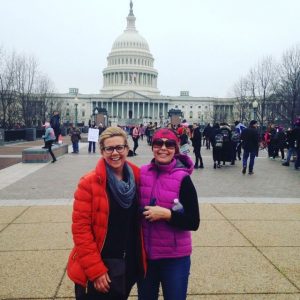 Minks wanted to wrap her statement up with one quick thought: “I have heard many people say that those like me should just get over it.  Let me be clear, I am not getting over anything.” 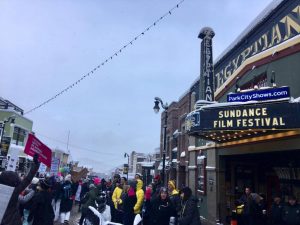 Julia Wheat Thomas was already scheduled for a fun girls weekend in Park City, Utah. It was, after all, the Sundance Film Festival weekend, too. But Thomas decided she wanted to do her part. 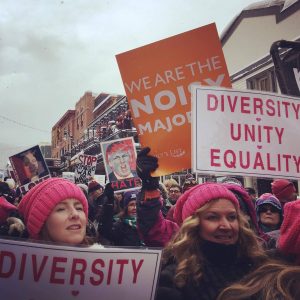 “It was awesome! I went by myself. It was very empowering. I am glad I went. Major snow and tons of traffic. Should take 20 minutes to get to where we marched, but it took an hour. Seven-thousand people showed up, when they were only expecting up to 4,000.” 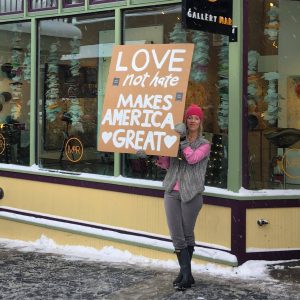 Katie Kneisley and her daughter, Lucia, also went to a sister march in Lexington. They are formerly of Danville.
“Once I saw that a sister event to the D.C. march had been scheduled for Lexington, it was a given that I’d attend if at all possible. Human trafficking, gender-based violence, adequate health care access, child safety, and human rights in general are all issues dear to my heart. The inclusion of different faith groups and organizations such as Moms Demand Action made it all the more powerful a draw.” 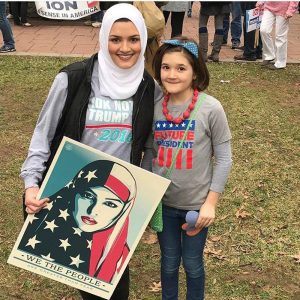 Photo of Lucia Kneisley, right, taken by her mom, Katie, with a new friend she met at the sister march in Lexington.

Kneisley said the sense of unity, energy and enthusiasm was incredible. “I ran into friends from church and work and college, people from all over Kentucky who were overjoyed to be part of such a crowd. There were grandmas and grandpas, children passing out paper hearts, ministers, teachers, farmers, artists, people of many colors and many backgrounds. It was a compelling counterpoint to the tone already established by the current administration in D.C., and what I hope will be a snowballing effort to protect the freedoms our nation has long fought to secure.”
Here’s what Kneisley’s daughter, Lucia, 8, had to say about the march: “I marched because I know it’s right. I also did it to protest hurtful treatment of women and girls. I thought the march was exciting because we got to say chants and hold up signs. There were thousands of people there!” 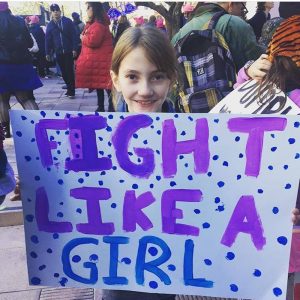 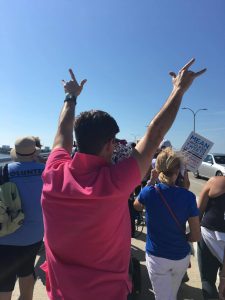 Kelly Miller, photographed by partner Tim Robbins, both formerly of Danville, take to the streets for a sister march in Sarasota, Florida. 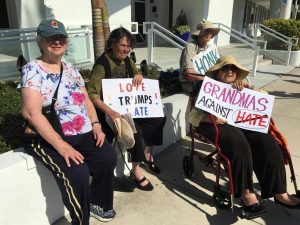 Grandmas Against Hate, photographed by Tim Robbins in Sarasota during the sister march. 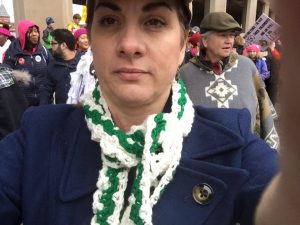 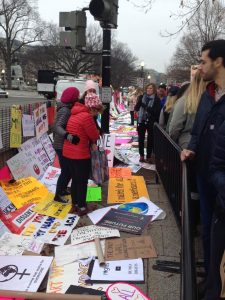 An emotional moment caught by Jeanette Harville of Tazewell, Tennessee, formerly of Lexington. 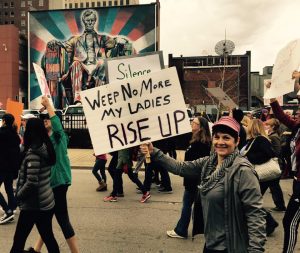