Could be another year before 27 bypass receives funding 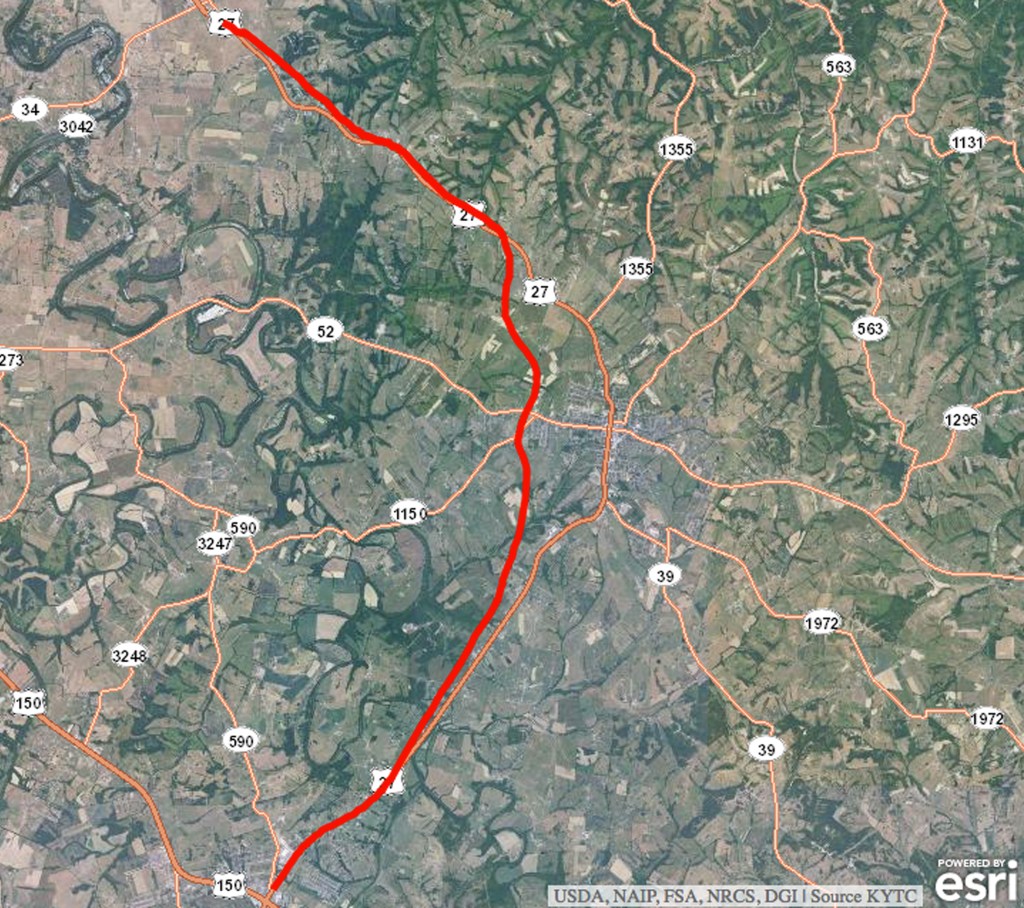 Map courtesy of the Kentucky Department of Transportation The red line is the the proposed path of the US 27 bypass, which likely won't receive any funding before 2018.

LANCASTER — It could be 2018 before funding would be available to begin expanding U.S. 27 from Ky. 34 in Garrard County south to the Stanford area in Lincoln County.

“In 2018, I’m hoping to get enough money to get that project allocated and moving forward,” said Sen. Tom Buford. “We have money set aside to do the planning.”

The project would create a bypass around Lancaster by rerouting U.S. 27 from it’s intersection with Ky. 34 north of Lancaster west around the city. The project’s southern terminus would be on the north side of Stanford.

Natasha Lacy, public information officer from the Kentucky Transportation Cabinet, District 7, confirmed the bypass is a state-funded project and is on hold due to funding.

Buford said money has been set aside to do planning for the project. He’s confident that, with the help of Rep. Jonathan Shell (R-Lancaster), who serves as House majority floor leader, the project will be able to move forward.

“That’s one of the roads that should have been done years ago, in the Nunn administration,” Buford said. “U.S. 27 is and has been a heavily traveled road.”

Jim Adams, judge executive of Lincoln County, said he was looking forward to the project’s completion, as it would offer an alternative to interstate 75.

“I would love to see a four lane road from Eubank, where it currently stops, to 34,” Adams said.

The first phase of the U.S. 27 expansion began in 2008, costing $41 million, according to a Dec. 17, 2012, news article about a ribbon cutting ceremony for the widening project in Lancaster. That expansion made U.S. 27 four lanes from near the Jessamine County line, where the highway was already four lanes wide, south to the Ky. 34 turnoff toward Danville.

Prior to the expansion, the heavily traveled but narrow road was dangerous and packed during rush hours, according to officials at the time.

“We had a number of fatalities (prior to the expansion),” Garrard County Judge-Executive John Wilson said. “The number of incidents has dropped dramatically. That’s something we don’t want to lose in all of this — that people’s lives have undoubtedly been saved.

Wilson estimated that, at one time, there was about a wreck a week on the old stretch of U.S. 27.

A related project would make the central intersection of Lancaster — at Ky. 52 and the current U.S. 27 — into a roundabout. That has been put on hold until the  bypass project is complete, Lancaster Mayor Chris Davis said.

“This is a state-funded project that will have to compete with all of the other projects in the next Highway Plan for funding. At this time, there is no funding available to begin the project,” Lacy said via email.

Preliminary drawings were made for the proposed roundabout, but Davis said it appears the city and county are “years away” from discussing it again.

“We had an engineering firm in Winchester work up a draft and it was really nice,” said Garrard County Judge Executive John Wilson, who also confirmed no action was taken recently on the project.

According to a proposed 2016 road plan from the Kentucky Transportation Cabinet, it would take three phases to complete the circle complete at a cost of nearly $710,000.

Rep. Jonathan Shell could not be reached for comment.