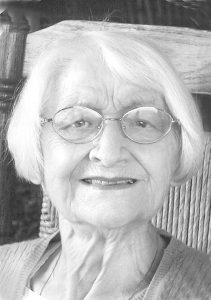 She earned an Associate Degree in Early Childhood Development in Waldenburg, Germany, completed her Practicum in Sudetenland, Germany and was the Kindergarten Director in Kupferbere, Schlesien, Germany.

Hilde was a histotechnician at Ephraim McDowell Regional Medical Center and a homemaker. She was a student nurse before her marriage to the late George M. Wilder. She was active in the Danville community as a member of the Democratic Women’s Club, NAMI (the Kentucky Alliance for the Mentally Ill), and The Ephraim McDowell Hospital Auxiliary. She was a member of Ss. Peter and Paul Catholic Church and the Altar Society.

In addition to her husband, George, she was predeceased by a son, David A. Wilder and a sister, Ursula V. Wilton.

She is survived by her daughters, Anna Maria Wilder of Maryland and Marlene (Danny) Settles of Danville; a granddaughter, Dana Settles (Barry) Kogan; and a great-granddaughter, Katara Kogan; and several nieces and nephews.

Pallbearers will be David Sanford, Barry Kogan, Albert Strunk, Danny Settles and her nephews, Tony and Mike Wilder. Honorary pallbearers will be the German Club. Burial will be with her husband and son at Camp Nelson National Cemetery at 2:30 p.m. Thursday. Father Paul Prabel will be the celebrant. Visitation will be 4-7 p.m. Wednesday, February 1, 2017 at Stith Funeral Home. Memorial donations are suggested to Ss. Peter & Paul Elevator Fund or Heritage Hospice.