Velma Roberta Jackson, 84, of Danville died Wednesday, February 1, 2017. Born February 8, 1932 in Danville, she was the daughter of the late Raymond and Margaret Lou Burton Bryant. She was a member of The First Church of God. In adition to her parents, she was predeceased by her late husband, James William Jackson. 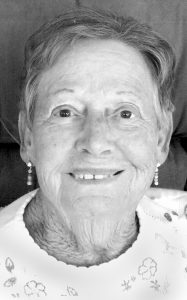 The funeral service will be 11:30 a.m. Monday at Stith Funeral Home, Danville. Rev. Kevin Cummins will officiate. Burial will be in Camp Nelson National Cemetery.

Pallbearers will be Spencer Taylor, Casey Taylor, Jason Peavler, Hagen Jackson, Tristen Morrow, Josh Woods. Honorary pallbearers will be Jennifer Sargent and Halee Woods. Visitation will be from 4 to 7 p.m. on Sunday at Stith Funeral Home, Danville. The online guestbook is available at www.stithfuneralhome.net.