Ads make plays down the stretch to stop Boyle 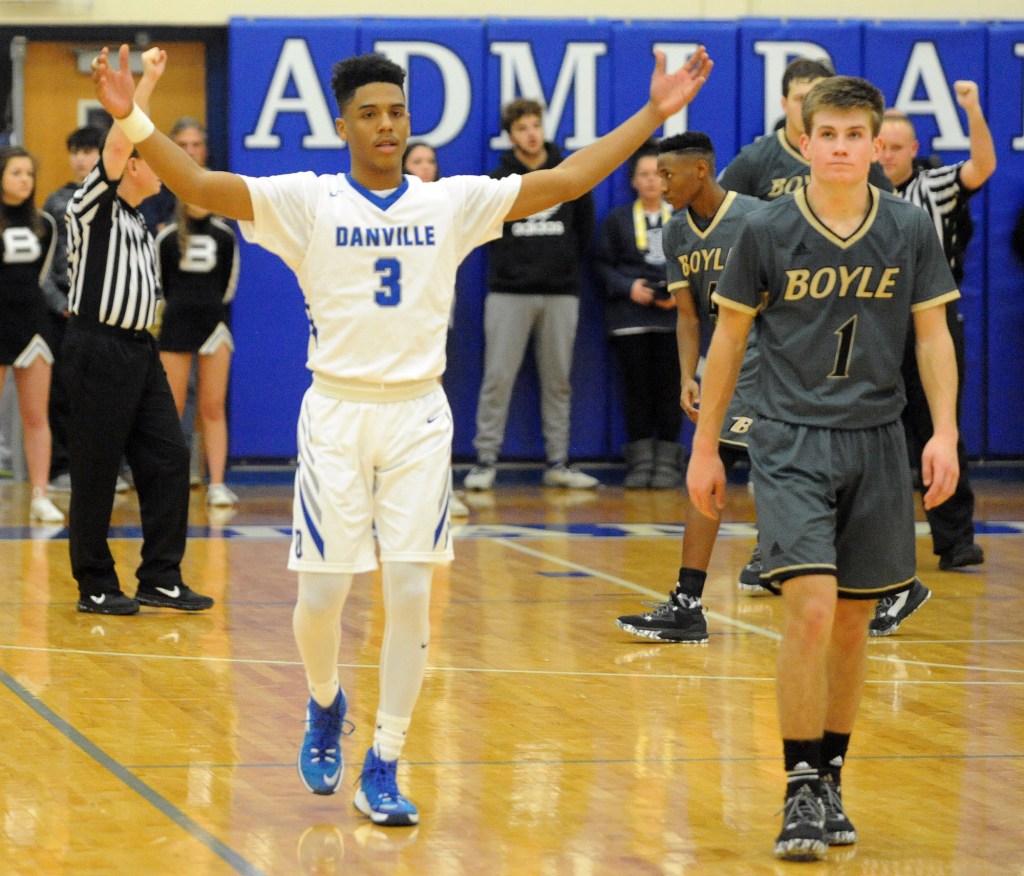 The rivals battled to another tight finish Friday, with the Admirals edging out a 61-56 victory on their home court.

Danville, now 2-3 in the district, will play Boyle (3-3 in district) in the first round of the 45th District tournament later this month, and the Ads have some added confidence after their first win in two weeks.

Ads coach Ed McKinney said his team made the least amount of mistakes down the stretch to come away with a win.

“Steve (Adams) and his teams at Boyle County, they don’t make mistakes unless you make them make mistakes,” McKinney said. “I don’t think either team is pleased with how we played down the stretch. We didn’t do a lot of good things late, threw it away some when we shouldn’t have. I thought the game toward the end, ball bounces the right way, they make a shot, we make one, we bank a free throw in. It was that kind of game. And usually these rivalry games are, it’s who make the fewest amount of mistakes, especially when you’ve got green teams like we have.”

Each team has battled the inexperience problem this season, and Boyle had its issues this game. The Rebels led 14-12 after one quarter and Danville had six fouls, but Boyle let the Ads back in the game by committing fouls on the other end and not trusting teammates.

“I’m disappointed in the fact that things that we work on in practice and things that we have to do for us to be successful, we don’t carry over to the game,” Adams said. “Tonight, there was a few minutes there in the first half, we were in foul trouble and we tried to do too much individually instead of just trusting teammates, going and playing.”

Zach Thornton banked in a 3-pointer as time expired in the first half to tie the game at 32-32 entering the break. He finished with a game-high 22 points and went 7-for-8 from the foul line.

“Zach Thornton made some nice plays for us, he’s rebounding the ball better,” McKinney said. “He had a good game out there. I thought he was great.”

Boyle’s offense slowed in the second half, in part due to Danville’s defense. The Rebels finished with 14 turnovers compared to Danville’s 11.

Adams said shot selection wasn’t at its best during Danville’s run in the third quarter.

“In the second half, we got four straight stops and came down and shot four 3s, by people who aren’t 3-point shooters that we would want taking those shots,” Adams said. “The biggest thing is we probably missed six to eight layups because we don’t jump stop and take it up strong, we wanted to try to avoid contact and we end up underneath the basket instead of taking it up and getting fouled or finishing the play.”

McKinney said Jared Southerland and Thornton, who combined for 16 points in the second half, were big down the stretch for the Ads.

“Jared is our only guy that has been in crunch time, but now, these guys should be getting a little better,” McKinney said. “I thought David Walker was sound, Tanner’s (Ford) learning to play the point better all the time. Tevin Kavanaugh was good off of the bench, Ellison (Stanfield) was good off of the bench. We played 10 guys, that’s good. I thought Shaud (DeShaud St. Martin) was good, he hit a couple of 3s that kind of got us going in the second half. I still feel like we’ve got a long way to go. But it’s a district win and we’re glad to have it.”

Adams said his players needs to make changes to how they play, or it could be a short postseason.

“Until that happens, we’re going to play people tough because our kids play hard. They just have got to understand that paying attention to detail and understanding what we’re trying to accomplish is important,” he said. “You just don’t go out there and play. Danville made plays, they get after you and they hit some shots. They banked in free throws, a couple threes, but that’s going to happen. You’ve just got to continue to play and be smart and tonight, we weren’t. But you’ve got to give credit to Danville, they caused a lot of that.”

Admirals get one step closer to district crown