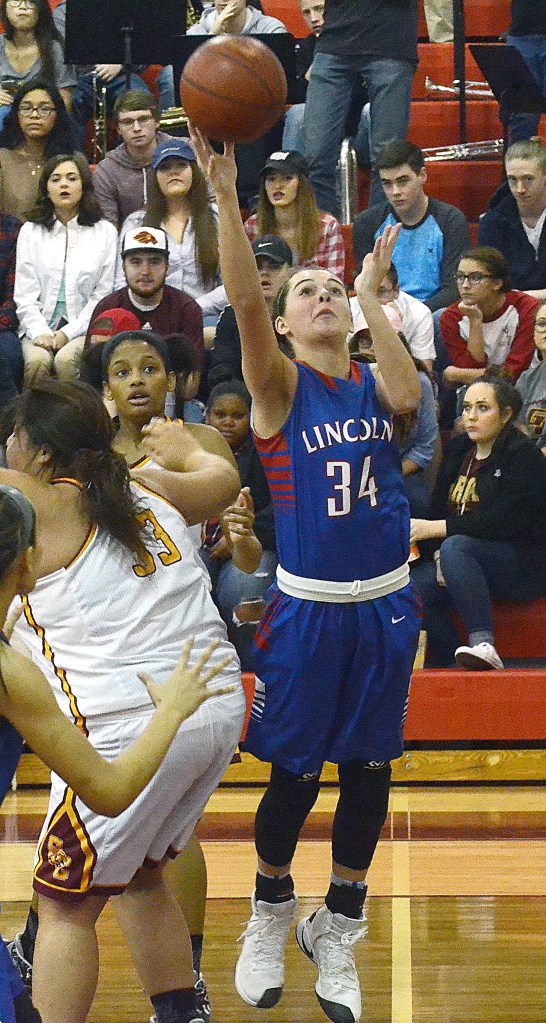 LANCASTER — The Lincoln County girls grabbed their 16th win of the season Friday night, completing their sweep of Garrard County with a 69-62 win in the first game of a 45th District doubleheader.

The Patriots, now 16-6 overall, 4-1 in the district, had to overcome a slow start to notch the win, tallying just five points in the first quarter to fall behind 14-5.

“If you’d told me we were only going to score five points in a quarter, I wouldn’t have believed you,” Lincoln coach Cassandra McWhorter said. “We had a slow start and Garrard stuck to their game plan really well there early and made some shots. I never thought our girls were not hustling or the effort wasn’t there, we just didn’t have some things going our way.”

Lincoln would redeem itself over the remainder of the game. The Patriots burned the nets for 25 points in the second quarter to get within 32-30 at the break, then followed with a 23-point effort in the third quarter to surge ahead for good.

Emma King paced Lincoln in the win with 21 points, seven rebounds and five assists. She was one of four in double figures in the win. Logan Godbey poured in 18 points and grabbed six boards, Maddy Boyle finished with 12 points and four assists and Haley Southerland had 10 points.

Garrard County coach Scott Latham had plenty of praise for his team even in the loss.

“We played really well. I told the kids that I’m really proud of the way they competed throughout the game. I love the fight and the way we competed tonight,” he said. “We just had a lull in the first half and a lull in the second half, which cost us the game. You can’t do that against good teams. That’s when they take advantage of you and make runs.”

Lincoln, which led briefly at the beginning of the game, took advantage of its 25-point second-quarter run to retake the lead. Boyle pushed in eight of her 12 points in the second quarter, King had seven points, Southerland scored six points and Trinity Shearer and Jenna King each had two points. Emma King’s seven included a 3-pointer with 1:11 to go in the first half which nosed the  Pats ahead 28-27.

Logan, who was 3-for-5 from 3-point range, bombed in her second 3-pointer to open the third quarter and extend the Garrard lead to 35-30. However, Lincoln responded with an 8-0 run to take the lead.

Emma King answered Logan’s trey with her own 3-pointer then Godbey hit inside and followed with a 3-point goal to give Lincoln the lead for good, 38-35.

“The third quarters kind of been up and down like a roller coaster this year for us so I kind of challenged them in the locker room at halftime to really come out and make sure that we had a real strong third quarter,” said McWhorter. “And they did. We got clicking and we got things going the way we needed to and kind of got in a rhythm. After the shot by Logan there, we responded with that 8-0 run and was able to get going.”

Godbey poured in half of her 18 points in the fourth quarter, nailing a 3-pointer then sinking six free throws. She hit the 3 to open Lincoln’s fourth-quarter scoring and Kaitlynn Wilks followed with two free throws for the  Pats’ biggest lead of the night, 58-48.

Garrard used a 5-0 run to get within four points midway through the fourth, with Maddy Day, who finished with 13 points, sinking one free throw then Neek Hocker, who had 14 points, scoring back-to-back buckets in the paint to make it 60-56.

That would be as close as the Lions would get as the Patriots moved on for the win.

“It wasn’t a pretty win, but it’s a win and I’ll take it,” McWhorter said. “I liked the way we responded after starting slow, but we still have things we need to learn late in a ballgame when we’re up. There’s still youth there late in the game and things we need to work on.”

“We finally shot the ball well from the free-throw line, which we haven’t done all year,” he said. “We shot 70 percent, which is still not good enough. We’re going to keep continuing to work and get better every day and get ready for this final run of the season.”

Garrard used a 12-2 run to jump on Lincoln in the first quarter. Lauren Patrick opened the run with a bucket in the paint, Sam Adams followed with a field goal and a 3-pointer, Logan converted on a three-point play then Day drove inside for a bucket and the 14-5 advantage.