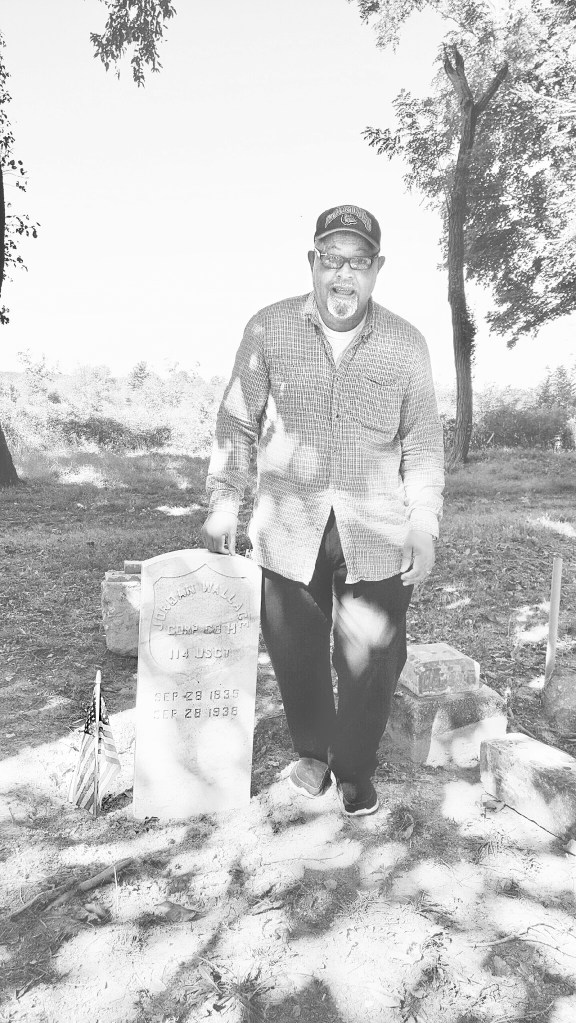 James Hunn of Danville stands by a military tombstone of his great-great-grandfather Jordan Wallace, a corporal in the Civil War. Wallace is buried in the Shelby City African American Cemetery.

(Editor’s note: Research for this article also was gathered by James Hunn of Danville, descendant of Jorden Wallace; and Mike Denis, local genealogist.)

Jorden Wallace and three of his six sons, who were former slaves in Boyle County, joined the Union Army in 1864 to serve in the Civil War.

They were among 10,000 African-American soldiers who were recruited at Camp Nelson in Garrard County and gained their freedom for their service in the Union Army.

Many of the men brought their families to the camp which served as a refugee camp for them.

The Wallace family was owned by Magdalen Wallace and they lived in the Stoney Point area in northern Boyle County.

Jorden, great-great-grandfather of James Hunn of Danville, served in Company B of the 116th U.S. Regiment of the U.S. Colored Troops.

Jordan was in battles

Jordan Wallace was a farmer in Boyle County when he enlisted with the Union Army as a private in Company H 114th Regiment of the U.S. Colored Troops, according to military documents. He was later assigned to the 25 Corps.

When he enlisted, Jordan was 21 years old, had black hair and eyes, and was 5 feet 5 inches tall.

After Jordan trained at Camp Nelson, he was sent to Richmond, Virginia, and later was assigned to the 25th Regiment made up of black troops, according to James Hunn.

After the surrender, Jordan headed to Texas where the final battle of the Civil War took place a month later at Palmito (White) Ranch near Brownsville.

Jordan remained in service until April 2, 1867, after serving three years and three months. His rank was corporal.

Records show Jordan was absent while suffering from an illness in January and February 1867 in a hospital in Brownsville.

His former owner, Magdalen Wallace, attempted to get the federal government to pay her $300 for Jordan, saying she maintained her allegiance to the government of the U.S.A. and was loyal to the Union, but she never got the money, Hunn said.

Jordan returned to this area after the war.

After Lydia died, Jordan married Alexandra (Lillie) Blakeman, 49, a widow of Adair County. She died October 12, 1940, and is buried in Hilldale Cemetery.

He owned a house, valued at $700, on Hustonville Pike in 1930 and and lived with grandchildren, Lillie Mae Blakeman 8, and Floyd F. Blakeman, 7.

Jordan, “a highly respected citizen of Shelby city passed away at his residence at the ripe old age of 103 years,” according the September 29, 1938, edition of The Kentucky Advocate.

Jordan died from pneumonia, according to an article the same day in the Danville Messenger. He had worked for the Shelby, McAfee and Tevis families.

Services were held at the Baptist Church in Junction City.

Jordan is buried in the Shelby City African American Cemetery in Lincoln County. 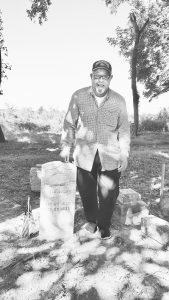 James Hunn of Danville stands by a military tombstone of his great-great-grandfather Jorden Wallace, a corporal in the Civil War. Wallace is buried in the Shelby City African American Cemetery.