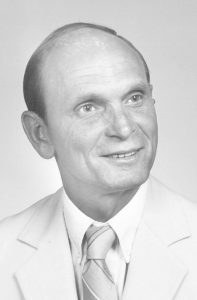 Bill was a 1962 graduate of Danville High School and attended the University of Kentucky. He studied drafting at Somerset Technical College.

Bill began his career as a draftsman at Grafton Press followed by GE in Atlanta and Corning Glass Works in Danville, where he remained in the human resources field through his career as a scheduler and supervisor and continued at Phillips Lighting Company until his retirement.

He was a Kentucky Colonel. He was a devoted husband, father and grandfather and loved to garden, raise vegetables and care for his yard. Reading and travel were his hobbies and they looked forward to going to Kiawah Island, South Carolina every year.

Bill could frequently be seen walking at Millenium Park. Bill was a member of Centenary United Methodist Church. He was an avid UK basketball fan and he and Susan went on their first date to a UK basketball game.

In addition to his parents, Bill was predeceased by a son, Richard Grady Malott.

Visitation will be from 4 to 7 p.m., Monday, at Stith Funeral Home.

Memorial donations are suggested to Heritage Hospice or the Boyle County Public Library. The online guestbook is available at www.stithfuneralhome.net.