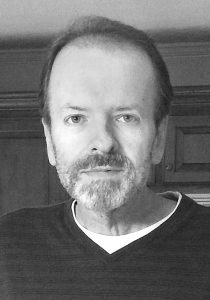 A memorial service will be held at 1:30 p.m., Saturday, Feb. 11, at First Congregational Church of Western Springs, 1106 Chestnut Ave., Western Springs. A reception will follow.

Chuck was born Jan. 9, 1960 in Danville, KY, to Dr. Charles and Pearl Sisk and welcomed by big sister Alice. He grew up in this small, beautiful, central Kentucky town enjoying the pleasures of hiking, camping, bicycling and chasing adventure with boyhood friends. He was a curious and enterprising youth, with a wide newspaper delivery route and memorable teachers who encouraged and inspired his path as a lifelong learner.

Chuck’s natural musicality and love of all genres of music began early with piano lessons, though he also learned to play saxophone and trombone, which he played in a Drum and Bugle Corps band.

On a trip to Chicago with a friend, Chuck, on a fluke, stopped by the admissions office at Northwestern University. The boy in overalls certainly made an impression and became part of the Class of 1982. Chuck’s years at Northwestern were transformational. While initially feeling out of his element at a large, urban Ivy League school, Chuck loved the rigor and rose to the challenge, graduating with a degree in mathematics.

Such a demanding program did not hinder a wealth of fun with his roommates in the Lindgren residence hall, where hijinks and Ultimate Frisbee games relieved some pressure.

After graduating, Chuck stayed in Chicago and played jazz piano at various bars and restaurants in Evanston and the city. Chicago Cubs games, running and advanced piano lessons filled his days.

Chuck began his professional career at Sargent and Lundy, an engineering firm in Chicago’s Loop, where he was a software developer and project manager from 1985-95. After earning a master’s degree in computer science from DePaul University, Chuck joined the computer consulting company SSC, working with clients to develop software solutions.

Through the 2000s and early 2010s, he worked two stints as a systems architect at NTE, a boutique company that developed transportation logistics software. While a consultant in 2012, Chuck was assigned to Mesirow Advanced Strategies, a hedge fund management company in downtown Chicago, at last finding a way to work in an industry that he had long found fascinating.

Colleagues recognized his professionalism, dedication and collaborative approach, and he was asked to join the firm as an employee in 2015, working as a senior data architect until his death.

He so enjoyed Mesirow, finding the work stimulating and challenging and the people and culture caring and nurturing. He made many wonderful friends who admired his attention to detail, his work ethic, his patience and kindness.

In November 1985, Chuck literally bumped into Stephanie Hanson during a Gregg Allman show at the Cubbie Bear bar, launching a lifelong love affair. They were inseparable after just a few dates, passionate, devoted and content in their rock-solid relationship. Each brought out the best in the other and did all in love for the other.

They finally “eloped” in 1996 and were married by a justice of the peace under the Wisconsin State Capitol dome in Madison, roping in a passer-by as the second witness to the ceremony.

Chuck and Stephanie loved to visit with family in Kentucky and Montana and enjoyed many vacations sight-seeing, hiking and exploring out west, as well as cross country skiing in Illinois and Wisconsin. Chuck followed many bands, and the two enjoyed shows and concerts around the Chicago area, particularly Fitzgerald’s in Berwyn.

Music was the common denominator when Chuck began playing with a jam band in the early 1990s. He was inducted into the Holy Goats band as keyboardist and sometime accordion player, and over the next 25 years, Joe Sinopoli, Steven Cushman, Pete Morrison and Randy Dritz became his dear friends.

Chuck spent some of best times of his life playing, teasing and sharing his passion for music with these men. He had a remarkable knowledge of music, the writers, players and anyone connected with the industry — from ragtime piano to Big Band to jazz — but particularly in the traditional and outlaw country music scene. A rocking song could compel Chuck to drop his reserve and dance by the stage, glass in hand.

Chuck had a quiet way about him and southern manners that he never forgot; he never rushed a sentence, and when he spoke there was just a hint of his Kentucky accent. He thought always before speaking, making whatever he had to say worth listening to.

Friends will remember his impish giggle when one of life’s little quirks tickled him.

Hardly a day went by when Chuck didn’t enthuse about his two children, Alison Claire, 16, and Charles W. Sisk III, or Charlie, 14. He loved to share his love of music with Ali, and with Charlie, his love of college basketball, particularly the University of Kentucky Wildcats. His children brought him great delight and always filled him to bursting with pride.

The family shares wonderful memories of vacations, time in the pool, shooting hoops, Susie Snowflake dances, watching movies, help with math, and his patient, kind manner. We will remember to “do our best.” Chuck was ever the gentleman: kindly, helpful, thoughtful, selfless, forgiving, generous and cheerful.

Beneath his quiet manner was a sharp and incisive intellect, and though he might disagree, he was always gracious and courteous. He has left a lasting example and imprint on the hearts of family, friends and colleagues, who are honored to have known him and heartbroken at his early death.

He is survived by his wife, Stephanie; his children, Alison and Charlie; his sister, Alice of Versailles; sister-in-law Barb Osweiler; nephews Jake and Tyler Osweiler; an aunt and uncle and many cousins.

In lieu of flowers, an account to benefit his children, the Sisk Children’s Educational Fund, has been set up at First Community Bank of Western Springs, 1000 Hillgrove Ave., Western Springs IL 60558 or donations in Chuck’s name can be made to the Danville Schools Educational Foundation, 152 E. Martin Luther King Blvd., Danville, KY, 40422.

A celebration of life will be held in Danville this spring.