The Hemp Highway: A new tour focused on history of hemp in Kentucky hits locally 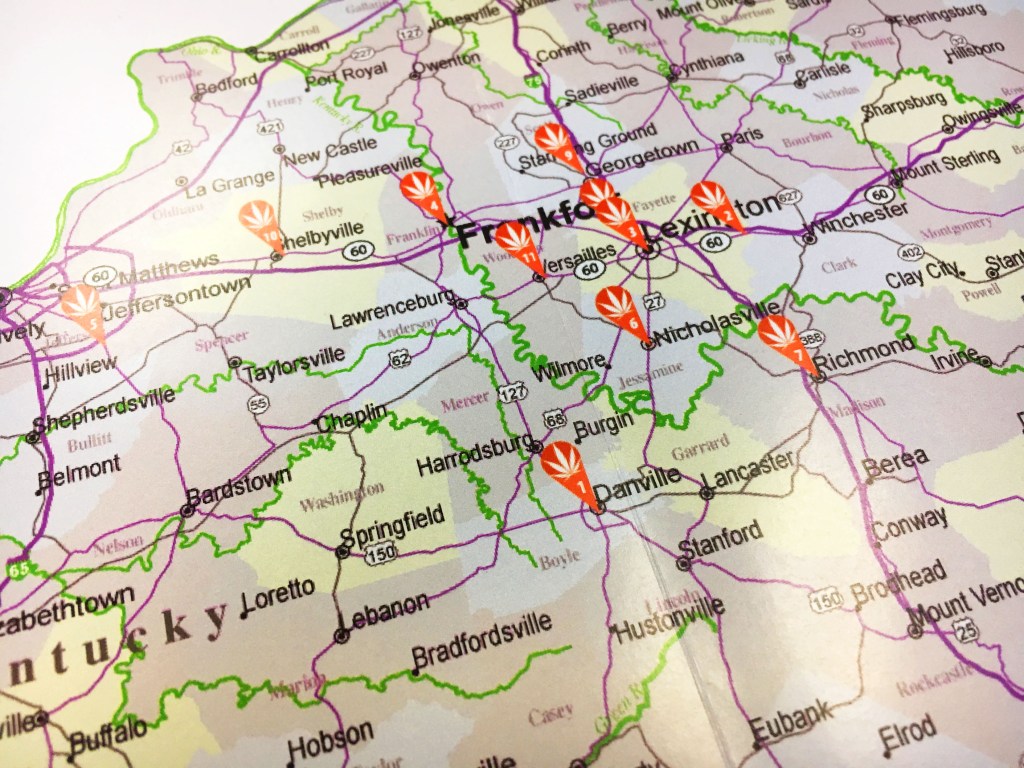 Boyle County is one of the several locations on the new Hemp Highway of Kentucky self-guided tour by Hemp Highway that includes the courthouse lawn, Constitution Square and Clark's Run Creek.

Daniel Isenstein said he admits — he was inspired by the Kentucky Bourbon Trail.
“They did 3.5 million visitors over the last five years …” Isenstein says from his home office in Lexington. Now, Isenstein is working to develop another tour — the Hemp Highway of Kentucky, a self-guided tour participants can jump on via a pamphlet and map he’s created through a limited liability corporation.
All of the hemp-related stops are included on historical markers, such as the one that previously stood in the Boyle County Courthouse’s lawn, which has been temporarily taken down due to the renovation, but will be restored, Isenstein said. The marker, No. 1279, says “First Crop.”
Other Boyle County locations in the tour include Constitution Square and Clark’s Run Creek. In 1775, Kentucky’s first recorded hemp crop was on Clark’s Run Creek. Isenstein’s literature says the crop was grown by Archibald McNeil, who also brought the first seed with him when he located to Boyle County.
“So essentially, the story of hemp in Kentucky starts in Danville,” Isenstein says.
Even though Isenstein, who moved to Lexington from Connecticut as a child, was studying pop culture (which he calls the “anthropology of comic books”) in graduate school, he was still hooked on history.
“I’ve never been able to get rid of the history bug,” he says, but he spent 20 years working in the family industry until it was sold off after his dad passed away. “I’m not a farmer, but research and telling a story are things I’ve always been interested in.”
After the hemp pilot program was announced in 2014, he became interested in the crop’s historical significance. Isenstein noticed the hemp-relation with so many historical markers and places around Kentucky.
“If you’re traveling around, you can start picking up bits and pieces of the story. It touches all parts of Kentucky history, which is such an interesting story and it should be kept alive.”
Although his initial idea was to create an app in order to follow the Hemp Highway of Kentucky, that was a pricey investment right off the bat.
“The company formed in October, and the website went live in December. The idea was to get it in place first, and what I’d hoped to happen did,” he says, referring to many people contacting him with artifacts and places to explore focusing on hemp production. 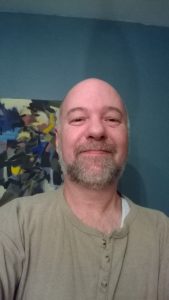 “Let’s be honest, if we were talking flax seed, we just wouldn’t be. There’s this salacious interest in hemp. Hemp, because of its familial relations lends itself to some ‘Patty Duke’ type of confusion. We exploit the human interest in salacious stories to teach a history lesson,” Isenstein says.
“I’d like people to understand that the potential to develop a thriving industry exists today and the time to get started is now. The U.S. is already years behind Canada, China and parts of Europe in developing what is evolving into huge world wide industry. I want people to understand that hemp is the hard-working, nerdy cousin in the cannabis family who does not go out and play. There is nothing to be afraid of… hemp is like ‘Kryptonite’ to his disreputable cousins.”
He says there’s also several places with historical markers — like Waveland in Fayette County — that say nothing about hemp, but were named after hemp. “Like in Midway, I found an old hemp warehouse which is now a boutique. Hemp is the thing that threads through all these historical sites when you’re walking through these small towns.”
It’s a great way to preserve history, while teaching it, he says.
“Kentucky is so unique in its place in U.S. history, going back to Colonial times, and pre-Revolutionary War. It’s an interesting story to tell.” 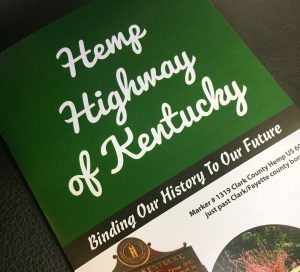 Boyle County is one of the several locations on the new Hemp Highway of Kentucky self-guided tour by Hemp Highway that includes the courthouse lawn, Constitution Square and Clark’s Run Creek.

Although he’s a one-man show at the present time, Isenstein says he’s had lots of help developing it.

“People from Kansas to Canada have been sending me things about Kentucky history, it’s amazing.”
The counties that have hemp-related markers are pretty much contiguous, almost forming an arc, Isenstein says.
“The Hemp Highway of Kentucky tour makes use of the Kentucky roadside historical marker program to build the framework for a fascinating exploration into the commonwealth’s unique historical relationship with the hemp plant.”
The remainder of the markers and additional stops are located between Louisville and Winchester.
“The goal is to provide visitors with a unique reason to leave the Interstate and explore the historic small towns that give the Bluegrass region its character,” the release states.
“I want to be in business and do well, but I also want the smaller towns and counties that feel pressured to plow down their historical houses and turn historical fields into strip malls that they haven’t leased yet to know — there’s another way. I want them to see the value in the tourism dollar,” Isenstein says.
Although Isenstein may not be quite ready to take on serious investors as of yet, he says to stay tuned.
“I can’t say point on what it is yet, but in a couple of weeks, we will have an announcement that people will want to get involved with. And we’re always interested in anyone contacting us with artifacts or other things.”
Kerry Steinhofer contributed to this story.
SO YOU KNOW
To find a map of the tour visit kentuckyhemphighway.com. The brochures are also available at 70 hotel locations between Louisville and Winchester.
Hemp Highway also encourages people to contact them if they have pictures, business records, old equipment or other artifacts related to the hemp industry in Kentucky. Contact Daniel Isenstein at (859) 339-7176 or at dan@kentuckyhemphighway.com.