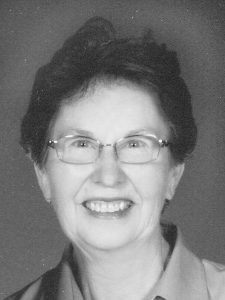 She was born in her parents’ home in the Forkland community of Boyle County to Cecil Tilden and Alma Whitehouse Ellis. She graduated from Forkland High School in 1955, and received a B.S. in Home Economics from the University of Kentucky in 1959.

In 1963 Wilma married James Louis Ewbank. They moved to Georgetown and then in 1970 moved to the community of Oxford where they lived until 2009.

In 1971 Wilma started her antique business known as the Wee Shop of Oxford. She was active in the Scott County Home Economist Club, member of the board of directors of the Georgetown Scott County Museum Board and Deacon Emeritus at Oxford Christian Church.

In addition to her parents she was preceded in death by siblings Cecil Ellis Jr., Darryl Ellis, Barry Ellis, and Dr. Barbara Taylor.

The family would like to acknowledge and thank caregiver Becky Phillips and to many others who provided generously of their time and expertise.