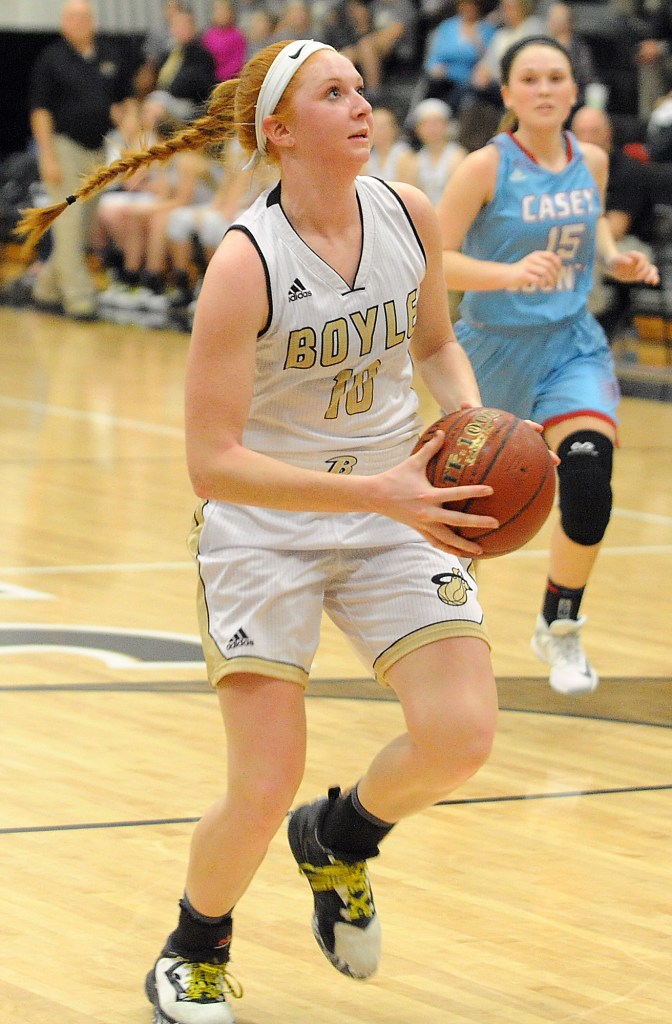 Emmie Harris started playing varsity basketball at Boyle County in seventh grade. So Tuesday’s final regular season home game was the end of an era for the Rebels.

Harris’ accomplishments have been well-documented this season. She’s the third girls basketball player in school history to break 2,000 points. After Thursday’s 72-52 win at Marion County, during which she scored 25 points, Harris is now 10 points away from tying the all-time school record — 2,351 points, set by Ashley Sanders in the early 90s.

Coach Greg Edwards called her into his office at the beginning of the season and told her that it was something she could accomplish.

“It’s definitely an awesome achievement,” she said. “It’s obviously been on my mind but it’s not what I’ve been focused on this season. Getting to region is a big thing but I think if I achieve that, it’ll be an awesome experience and something I’ll never forget.”

But breaking the school record in points isn’t the only thing on Harris’ agenda as her high school basketball career comes to a close. She’s one of the top 10 scorers in the state (25.2 points per game entering Thursday’s game) and arguably the top uncommitted senior in Kentucky.

That has attracted attention from colleges across the country. Coaches from Providence and Morehead State were in attendance for Harris’ senior night Tuesday, where she scored 28 points — 14 in the fourth quarter — in a 62-59 win over Casey County.

Having those coaches attend practices and games is something she had to get used to this season.

“I definitely try to play my best, I didn’t have my best game (Tuesday),” Harris said. “But it doesn’t really bother me, I just know I have to bring my A game. I try to play as good as I can every single game. It does put a little extra pressure on me, but I usually deal with pressure pretty well.”

The “weird” adjustment for Harris is the Division I rules. She said that coaches can watch her play but can’t speak face-to-face during the season.

“It was weird because they came to my practice in the beginning of December or before, and it’s weird because they flew all the way here but they can’t talk to me in person at all,” she said. “I didn’t know that when I first started the process. A lot of them come to my games but it’s weird because you can’t say, ‘Thanks for coming to my game.’ You have to text them after. I think that’s really weird, because you talk to them on the phone all the time, and then you see them in person but you can’t talk.”

Harris will get face-to-face time this weekend at Utah State, one of the first D-I schools to offer her a scholarship.

“I haven’t got to visit really many of the schools yet because, obviously, it’s the middle of the season,” she said. “So definitely in March, I’ll be able to visit a lot of places and they’ll be rounding out their seasons, too, so it won’t be as busy. Once I visit, I’ll probably be able to narrow it down a lot more than what I have right now.”

Harris has received interest from as far away as Santa Clara in California and as close as Centre College. But she’s not worried about distance. 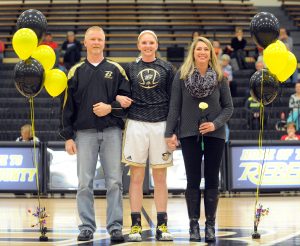 “I want to be somewhere that I can be comfortable at and feel like it’s a home away from home,” Harris said. “Definitely since I’m going to play sports, I want to not only go to college for the sports aspect but to see myself there even if I got hurt, or if I didn’t play for a season, could I be happy there, am I happy with the team atmosphere and what it’s about. Academics are also a big thing because I’m going to college, not to play basketball the rest of my life but to get my career base. That’s very important to me.”

Harris said she wants to major in Biology to take a pre-med track, but that might change. She wants to play for a team she can feel close with and a college that has opportunities for her outside of the sport.

As for basketball, Edwards said he could see her transitioning to play any perimeter position in college.

“I think she could definitely play 1, 2 or 3, and more than likely, she’s going to be 2 at the next level,” he said. “She has such a great, soft shooting touch and when she gets in a college program where she’s going to shoot the ball year around, she’s going to be even better. That’s amazing. But she’s a versatile player, so she can do a lot of things.”

Her versatility and athleticism is something that college coaches love. She is the two-time The Advocate-Messenger Female Athlete of the Year for her accomplishments on the track and soccer field along with the basketball court. It has also kept her off of the radar for many college teams because she hasn’t played AAU basketball in the offseason.

That’s why Edwards thinks any college would be lucky to have Harris because no one has seen her best yet.

Harris agreed, saying she’s excited to see how she improves with a ball in her hand year-round.

“I’ve never been fully in basketball, I’ve always went from soccer to basketball to track,” Harris said. “I only play four months out of the year. I’m definitely excited to be able to play all year around and see how much more I develop because I haven’t been able to play AAU or anything. I just feel like my game will improve all the way around if I have a ball in my hand 24/7 in college.” 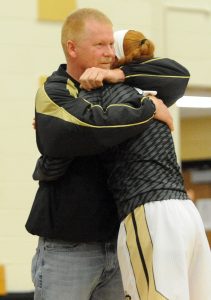 Making the decision won’t come until Harris has made more visits. She said that her parents have helped her every step of the way.

Making college visits, breaking the school record in points all while pushing for a region appearance has made for a thrilling senior season, she said.

“It’s definitely been an awesome and stressful experience,” Harris said. “I can’t wait to commit, but I’m excited to visit colleges and just get to see very diverse and new places. Some of the colleges I’m visiting are across the nation and some are right near me. It’s going to be an awesome experience to see what everyone has to offer.”