Lavina Jane Barker Ellis, 62, of Danville passed away on Wednesday, February 8, 2017. Born on July 29, 1954, in West Virginia, she was the daughter of the late Olive Long Barker and Lawrence Gartlan Barker, Sr. 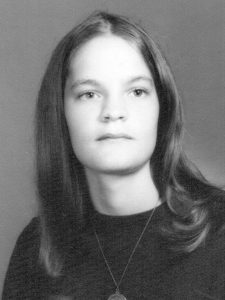 She had worked as office manager at Britts Department Store and merchandiser for American Greetings for 20 years. She was a member of the Harrodsburg Church of Christ and a 1972 graduate of DHS.

She is survived by her husband of 43 years, Mitch Ellis; a son, Matthew Ellis, and fiancé, Donna Perkins; a daughter, Amber Fowler, and husband, Stephen; a twin brother, Larry Barker, and wife, Dianna; a sister, Patty Releford, and husband, Bill; mother-in-law, Joan Ellis; and several nieces and nephews. She was also a devoted nana to her granddaughter, Emma Fowler.

A funeral service will be held at 1 p.m. Monday at W.L. Pruitt Funeral Home by Keith Greer with visitation from 5-9 p.m. Sunday.

Memorial contributions are suggested to the Markey Cancer Center and the American Lung Association of Kentucky.

Guestbook is available at www.wlpruitt.com.