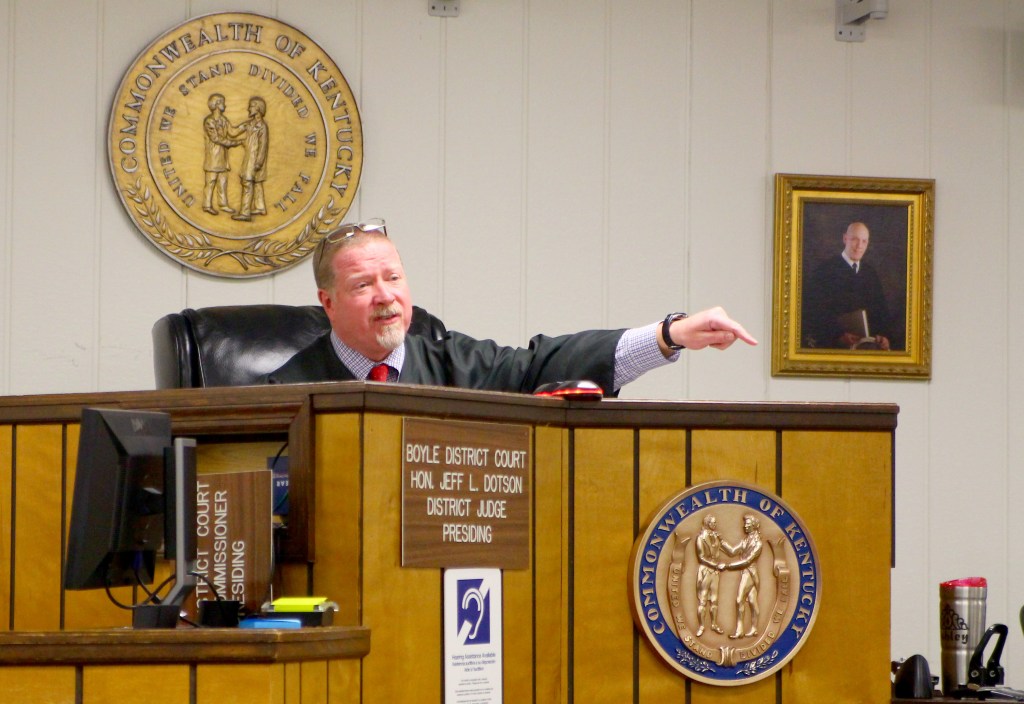 The morning of Jan. 25, Chief District Court Judge Jeff Dotson reluctantly held an on-the-record meeting in his courtroom that turned into the moment the 50th District Court officially began phasing out its use of Kentucky Alternative Programs.

“I’ve attempted to have my secretary continue to correspond with you that I was not necessarily ready to have this meeting,” Dotson told Beverly Martel, co-owner of KAP, the private probation monitoring company that had been used for the vast majority of district probations with sentences over 30 days.

“But respect for your persistence has caused me to have it this morning,” Dotson continued. “So go right ahead — I’m all ears.”

“Your Honor, we obviously — we’ve heard the rumors of talk of what’s happening here,” Martel said. “It’s just great concern on our part because as we are continuing to send our staff to court, we are obviously seeing that certain parts of the program are dismantling and there’s no communication.”

The 50th District Court, which comprises Boyle and Mercer counties, has stopped assigning any new probation cases to KAP ever since that Jan. 25 meeting, choosing instead to send people who agree to probation terms to the state Probation and Parole office. The change is bringing about the closure of KAP’s Danville office, expected to occur around the end of February.

At the heart of the change, according to Boyle County Attorney Richard Campbell, is how the local judges are interpreting recently amended rules from the Kentucky Supreme Court concerning private probation monitoring companies.

One paragraph of the new rules, which went into effect Jan. 1, states that courts “may” use private companies “only when probation monitoring services are not being and cannot be performed by a governmental agency, a not-for-profit agency or volunteers.”

Campbell said he’s been told that paragraph is the key to the change in the court’s practices.

However, that paragraph is not new in the updated rules — it is the same as it was in the Supreme Court rules that were approved in 1999 and went into effect Jan. 1, 2000.

“The verbiage has been there since 1999,” KAP Director of Operations Bobby Cummins told Dotson during the Jan. 25 meeting. “There’s been some minor changes (to other areas); everything else has been there at least since 1999.”

Dotson said multiple times in the meeting that the court parting ways with KAP is something that has been in the works for a while. At one point, he said a meeting setting changes in motion could have been held as much as a year earlier. Dotson also said that the change was delayed because of how well KAP has served the court.

“This matter probably would have come or been addressed prior to today’s date if it were not for your commitment and your employees’ commitment to this court,” Dotson said.

Dotson said he had consulted with Chief Circuit Judge Darren Peckler, both county attorneys for Boyle and Mercer counties and “two other folks” prior to reaching a final decision.

Later in the meeting, Dotson also noted that “Judge Peckler has had a stern position for a very long period of time and I will say it on the record — I was anticipating him coming in and mandating me to do it (end use of KAP), I just don’t think he’s gotten that far yet, to be honest with you.”

Dotson said his “strict reading” of the new Supreme Court rules “is quite concerning.”

“It has mandatory language that, in my opinion and this court’s opinion, gives a fairly clear indicator of what the Supreme Court is attempting to do, which is eliminate private entities regarding probation,” Dotson said. “The language says ‘shall’ many times, not ‘may.’ That is concerning to me as a judge.”

Dotson acknowledged the plan to break ties with KAP had upset many people.

“And it may very well not be for the best — I don’t know. That’s the reality of it. It is my position as the chief district judge for the 50th Judicial District, which is comprised of both Boyle and Mercer counties, that for me to have strict and proper compliance of this rule, it would become too onerous and burdensome for me to do that and continue to have (KAP) monitor folks on probation. … I’m going to start phasing out (KAP) today.”

Dotson, who earlier said Martel had been a long-time friend of his, continued:

“Beverly, you know that I have the utmost respect for you and (the local KAP employees). I may have done it improperly because I just did not want to have this meeting. I was hoping that everybody could just part in better ways, if you will.”

Dotson said he wanted KAP to provide a list of current defendants the company is overseeing to his office and both county circuit court clerks to aid in the transition. He said he knows the situation is “of grave concern to (Martel) as an owner and all of your employees.”

“I know that. And I have not slept very well in 24 days,” Dotson said, apparently referencing Jan. 1, when the new Supreme Court rules went into effect. “It is upon us and I have made a decision and that’s what it’s going to be. It’s not up for debate, with all due respect. You can go back to your supervisor — if there is another one — and tell them what a harsh, mean judge I was and you couldn’t convince me otherwise. It’s just not up for debate.”

“Is there going to be any resistance from KAP in attempting to cooperate with the court in this transition period?”

“No sir, your honor,” Martel responded.

Similar transition underway one district over

Like the 50th District, the 13th District — Jessamine, Garrard and Lincoln counties — is also no longer using KAP. That transition began before the one in the 50th, KAP Director of Operations Cummins said in a phone interview Thursday.

Those are the only two districts where KAP is going away, Cummins said. “We are secure in our other locations,” he said.

During the Jan. 25 meeting, Martel warned that the transition in the 13th District — which is resulting in the closure of KAP’s Jessamine County office — was not going smoothly.

“The way they chose to do it — it’s really a circus over there, and it’s going to be a circus for them for some time coming, because our end is next week — the 31st — and they are nowhere near prepared,” Martel said. “Although it is unfortunate for us as a company, we certainly understand your position and we want to help the county, we want to help the court to make this transition.”

In his phone interview Thursday, Cummins expressed surprise that the 50th and 13th districts are apparently citing an unchanged paragraph in the new Supreme Court rules as the reason.

Five new rules for how district courts must operate were also added.

Cummins said when the idea of the 13th District cutting KAP first surfaced, he didn’t think it would actually happen — at least, not with any speed.

“I’m floored that this happened so fast,” he said. “I was telling my staff, ‘relax, there’s no way this could happen so quickly.’”

Cummins said the Danville KAP office has been handling around 684 active cases in Boyle County and “nearly 300” in Mercer County. The Jessamine County KAP office had a substantially larger caseload — “14,000-15,000,” he estimated.

“I truly am concerned a bit — and maybe it’s just a fear of the unknown — of how these counties are going to maintain and continue,” he said.

Cummins said the closure of KAP’s Danville and Nicholasville offices means layoffs, but that KAP will continue to operate out of its other offices and serve courts in many other districts around the state.

“We are a business. I had to lay off a lot of good staff that I otherwise wouldn’t have had to lay off,” he said. “But given that we’re going to take an immediate impact on revenue, we had to offset our future billing.”

As the Jan. 25 meeting wound down, Martel told Dotson that KAP was still operating in its other districts with strong support from the judges there.

“I’m glad to hear that KAP is not just shutting its doors statewide,” Dotson said. “That does give me a little bit better feeling.”