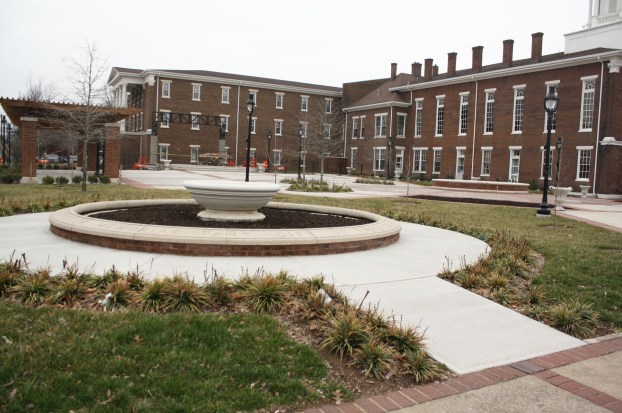 Construction at Weisiger Park is still underway, but the Danville City Commission expresses concerns about the condition of the main water feature in the park at a recent special called meeting.

As Danville’s Weisiger Park renovation nears completion, there’s one item on the city commission’s ‘to-do’ list that officials are finding hard to get done.

A hope has been for the central fountain in the park to have what Commissioner Denise Terry called a “bubble effect.” But accomplishing that is next to impossible with the current fountain setup, City Engineer Earl Coffey said.

“In order to make that spray, it has to do with the volume of the water that is in the bubble,” he said. “To elevate it, you have to have more storage in order to get the water in the air. Without water in the bowl, you really can’t do that.”

In order for the fountain to do what Terry and others have described, “you’re gonna lose a lot of water with the size of that bowl,” Coffey said.

Throughout this process, he said the pump company that supplied the current pump has tried to be creative with making the pump and bowl work together.

“They guy in Nicholasville that provided the pump, he says this is the best one you can get with the conditions you have,” Coffey said. “You need to change your conditions if you wanna do something different.”

To create a “bubble” effect, the bowl in the fountain would have to be completely replaced, he said.

Coffey said architects with Brandstetter Carroll suggested waiting until the whole project is completed and making sure that’s the direction the city commission wants to go before taking that drastic of a step.

“They’re right — you do have to get in there and remove it,” Coffey said. “They can see that the picture doesn’t look like what it’s gonna do, and ultimately, that’s gonna be something we’ll have to talk about.”

Brandstetter Carroll wants the commission to give the design a chance, then make a decision, he said.

“There’s no sense of urgency in their minds, I don’t think,” Coffey said.

Perros said that there is a sense of urgency in his mind and it’s “because people — they want it finished.”

Terry said the fountain is one of the first things people see in the park, even if they are just driving by.

“And come good weather, we’re gonna hear about it if it’s not correct,” Perros said.

“We might appreciate the overall design more when the water wall is completed,” City Manager Ron Scott said.

Centre professor reminds us: Be kind Billboard erected on U.S. 127 in Frankfort sends simple but necessary thought in turbulent…

A grassroots effort launched by a Centre College economics professor has garnered lots of attention. Professor David Anderson had a... read more