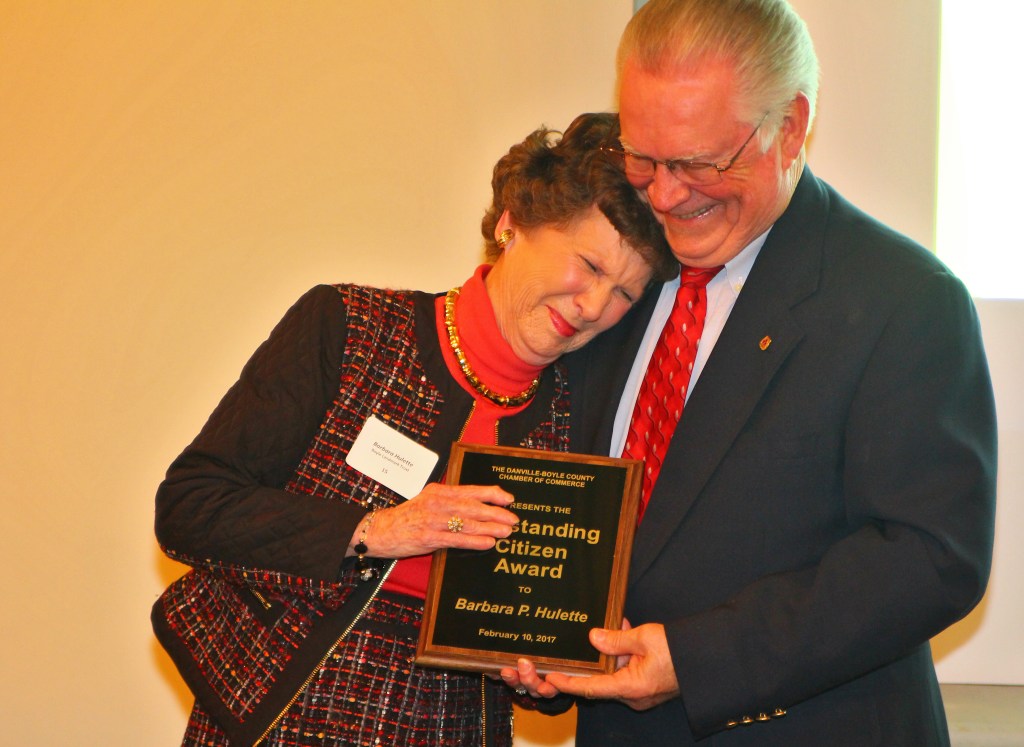 Hulette has worked with the Boyle Landmark Trust on projects including the preservation of the Willis Green House and Willis Russell Memorial Log Cabin. She was presented with the ultimate individual Chamber of Commerce award — and given a hug — by State Farm Insurance agent Bob Miller at the culmination of the night’s festivities.

“Barbara Hulette is a lady of grace, dignity, compassion and a heart that is passionate about historic preservation,” said Lisa Knetsche, chair of the chamber board and host for the evening. “Her work extends to the state and national levels, where she has received recognitions and awards created in her honor by the Bluegrass Trust and Preservation Kentucky. She was a leader in establishing a Historic Preservation Department at the University of Kentucky.”

“Barbara has been an advocate with economic development, sharing her knowledge to raise awareness on how history and preservation can benefit economic growth and tourism,” Knetsche continued. “For her efforts, Boyle Landmark Trust recently created the Barbara P. Hullete Service Award in her honor to recognize work others are doing.”

The Outstanding Citizen award is given each year to someone who has volunteered to benefit the local community for more than 10 years. Last year’s Outstanding Citizen was Kathy Miles, coordinator for the Boyle County Agency for Substance Abuse Policy and part of the Hope Network. 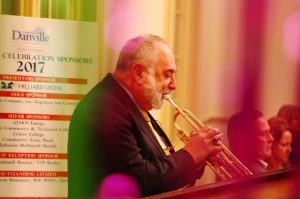 Prior to the awards ceremony, the packed house at the Danville Country Club was treated to dinner and music from Vincent DiMartino, a Danville resident who is also one of the country’s leading trumpet performers, and Dr. Keith McCutchen, a pianist who is director of the Kentucky State University Concert Choir.

Other award winners are:

Meggitt has seen continual success and growth over many years and “is also involved in community events and activities like Relay For Life, the Great American Brass Band Festival, the Heart of Kentucky United Way Day of Action” and other fundraising activities for community organizations, Knetsche said.

“The business, though only a couple years old, is already being recognized on websites and in publications and winning awards in their business arena,” Knetsche said. “Nick and Brittany Adams bought Warrenwood Manor in 2014 and have turned it into a wedding venue that is impacting our local economy as they work to attract couples from out of town and out of state to our county, adding tourism dollars to our local economy.”

Davenport served as chief operating officer and chief nursing officer prior to becoming president and CEO for Ephraim McDowell Health.

“Gary Chidester has been the leader of The Hope Network in Boyle County who continually looks for avenues to promote the program and the potential it has to help people in need,” Knetsche said. “… Patti Chidester has been equally involved with the Hope Over Heroin event and The Hope Network , but she very much prefers the behind-the-scenes work helping incorporate the organization as a non-profit.”

“The Hope Network has stepped up to tackle a serious issue facing our communities — taking a strong position on the need to support the recovery of substance users,” Knetsche said. “Through prevention of drug and alcohol use by serving and educating children; through intervention by knowing resources available for those suffering from this disease; and restoration through employment opportunities, spiritual growth, church connections and aftercare.”

“Under their leadership and with a few outstanding volunteers, they have raised $172,000 for the chamber budget,” according to dinner’s program.

“Clay has been active since high school with the Great American Brass Band Festival, assisting with their logistics, as well as their new Bourbon and Brass event,” Knetsche said. “He serves on the Wilderness Trace Development board and helps with their Big Toy Day. He sits on the Big Brothers Big Sisters Advisory Board and has served as a ‘big’ since 2007.”

• Ambassador of the Year — Kara Bastin

Order prints of photos from the chamber dinner here.