White to retire as director of Housing Authority 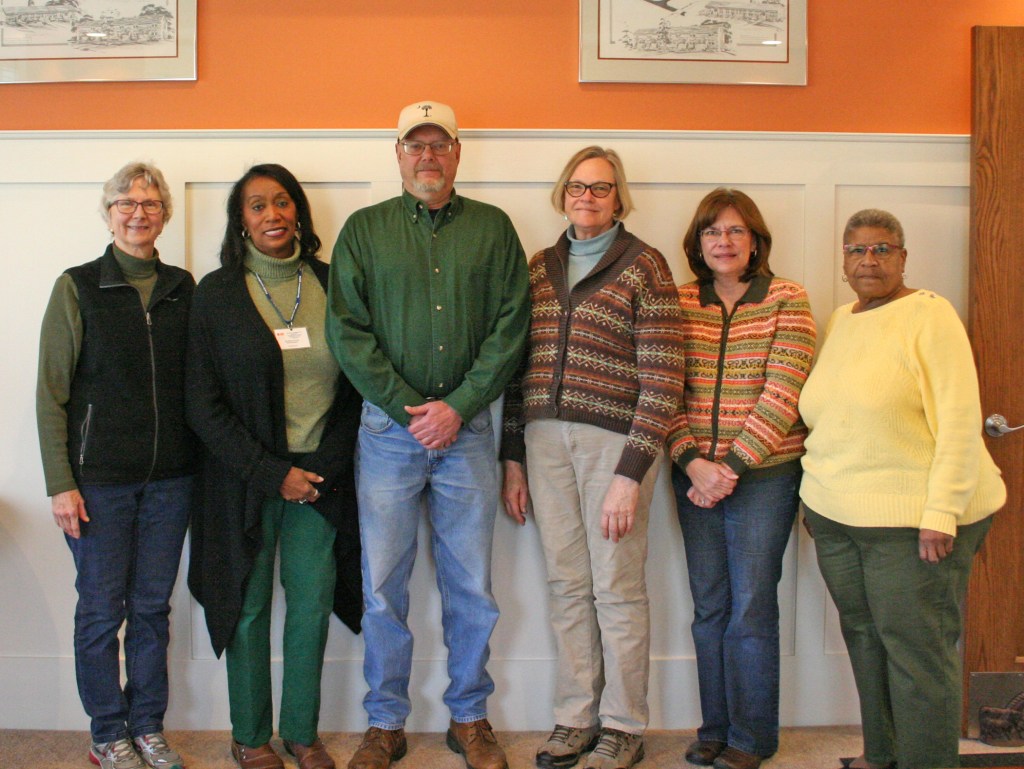 Kendra Peek/kendra.peek@amnews.com Rachel White, left, is retiring after 30 years at the office of the Housing Authority of Danville, but she says the authority has succeeded because of the staff, including Mildred Taylor, Joe Culvertson, LeeAnne McCann, Susan Calhoun, and Mary Houston.

A career that spans 30 years working with low-income families in Boyle County will end in April, as Rachel White, longtime-director of the Housing Authority of Danville will retire.

“It’s been a fantastic experience,” White said. “The quality of staff that works here is exemplary. The community is extremely embracing of public housing.”

White’s story begins in Germany, where she spent her childhood. Her parents were in the service in World War II and during the war, her father was captured by the Germans.

“He was able to escape, but he was in a German prison camp for six months and learned to speak German,” she said.

After the war, he returned to Germany, first as a liaison officer and later as an engineer for an aircraft company there for 27 years.

“My siblings and I were there up until the time we went to college, then my parents shipped us off to the states,” she said, smiling.

White enrolled at the University of Kentucky in 1969 and, having spent her whole life in Germany, said the culture was a shock.

“I could speak the language, but the culture just blew me away,” she said. “It was very different.”

It was also a “very good time” for White, she said, because that’s where she met her future husband, Paul. The two now have two daughters, Stephanie, a lieutenant colonel in the U.S. Army, and Cassandra, a nurse at the University of Kentucky Medical Center.

Despite having obtained her real estate license by the time she graduated the University of Kentucky in 1972, White was hired by a property management group that managed low income property in Louisville. She had realized she didn’t enjoy selling real estate.

She eventually became the housing manager of a 20-story high rise.

“That’s how I got my start in housing management,” White said.

She and her husband moved to Versailles and White transferred within the same company to Frankfort, before being hired by the Lexington Housing Authority, where she was introduced to public housing.

A few more moves, first to Corbin, then finally to Danville. White was hired on as the bookkeeper for the Housing Authority of Danville.

“About 18 months later, I was hired as the executive director. All of my working career has pretty much been in property management,” White said.

One thing White has learned in 30 years, is that everyday is different.

“It just doesn’t get boring … It’s one of those vocations that is always varied. We don’t just provide housing for low income. We’re also responsible for providing utilities. We have to comply with the public service commission on providing electric, gas, water,” she said. “We also do renovations, so we have funds put aside every year for construction. I’m dealing with architects, contractors … It’s a broad range.”

There’s also having to deal with litigation, White said, calling it one of the downsides.

Largely, the housing authority works to provide “quality housing” for low-income families, she said. But they also “work with outside agencies to provide services to better their lives.”

“Right now, we have six agencies that we provide meeting and office space to,” White said.

“In addition to that, we’re a sponsor for a senior companion program. We try to hit all levels for the people we serve. We have found that to be extremely rewarding,” White said.

Another thing that most people don’t realize, she said, is that the housing authority is a department of the city. However, it doesn’t receive funding, but makes a “payment in lieu of taxes,” or pilot, to cover services that the city provides.

The housing authority does receive some federal funding, but generates money through rents.

“That helps us stay afloat.”

Over her 30-year career at the Housing Authority of Danville, White said her favorite aspect has to be the people.

“Not only the residents who are amazing individuals, but also the agencies that serve them,” she said. “Plus the staff, too. We couldn’t provide the quality of housing if it weren’t for the quality of people who work here. Maintenance as well as office staff.”

One of those staff members, Mary Houston, retired on Friday, marking almost 25 years at the office.

White has seen children grow up in her time as director. One child obtained a degree in social work, and was able to work with White while he was employed at the Salvation Army. Another is a student at Centre. Some are parents with their own children.

“They have gone on to do and be valuable people in our community,” White said, proudly.

Houston agreed, and said that they’d had some “amazing kids” through the years.

The idea that the public housing areas are dangerous is a myth, she said.

“If you follow the police calls, you’re not going to see our addresses in there very often. We’re very proud of that, in that we do a good screening before we house individuals,” White said. “The police department works very closely with us, that if it looks like there’s an area getting out of control, that we utilize our lease agreement to say, ‘You either abide by these rules or you’re going to have to find somewhere else to go.’”

There are “typical neighborhood problems,” she said.

“But that’s what they are, they’re neighborhoods.”

Tim Kitts has been hired as the executive director of the Housing Authority and White is staying on until April 1 as a consultant to aid the transition and be available while he completes his training.

“I really plan to stay away. I will miss that, but I don’t plan to come back and visit. When a new person steps in, you’ve got to give them room, give them their time,” White said. “The interesting people, the activities that we do … I’ll be back involved in the community.”

Besides her work at the Housing Authority, White has been on the board of the Sister Cities Commission, something she hopes to be able to continue participating in.

Currently, the commission is trying to figure out a way to get Prince William and Kate, Duchess of Cambridge, to visit Danville, White said.

White has also been part of the Boyle County Cooperative Extension Board, the Salvation Army Board, on the board of KyADAPT, and a member of the Rotary Club.

White is already making plans for April 2. First, she said, she’s heading to Hawaii to see her daughter Stephanie and her son-in-law Doug Simmons. Both are in the U.S. Army. Then she plans to head over to Australia, to visit her sister for a while. She’ll make her way back, stopping off in Hawaii for a while before heading home.

White said Simmons will be promoted to Lt. Colonel later this year, so she will be traveling to New Orleans to see that ceremony, before taking off to Germany to housesit for a childhood friend.

“I’m going to take care of (her alpacas and llamas) and housesit,” White said, excitedly.

After that, she’s not sure. White wants to become a certified dog trainer and would like to work with deaf individuals on training their dogs.

“There isn’t a training program for our deaf community members,” White said.

Some of that comes from a love of dogs on White’s part and her experiences with KyADAPT, which left an impact on her.

White also plans to get her Master Gardener’s certification, which requires giving back to the community.

“(Plans include) just staying busy. Travel is definitely still in my future,” she said.