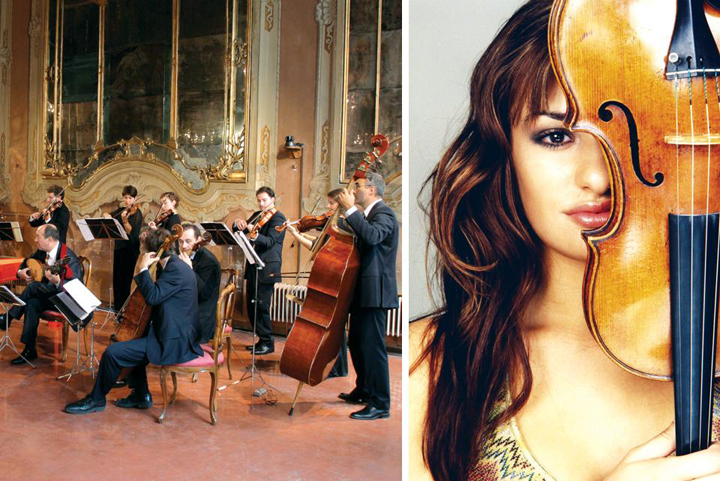 “This performance is a perfect Italian storm for classical music lovers,” said Norton Center executive director Steve Hoffman.  “The Venice Baroque Orchestra, hailing from Italy, is the absolute finest ensemble of its kind in the world.  Nicola Benedetti, who is half Italian and half Scottish, is arguably one of the top violinists in the world.  And Italian composer Antonio Vivaldi’s ‘The Four Seasons,’ which will be featured at the performance, is one of the most well-recognized pieces of classical music in the world.”

Founded in 1997 by Baroque scholar and harpsichordist Andrea Marcon, the Venice Baroque Orchestra is recognized as one of the very finest period instrument ensembles. The Orchestra receives wide critical acclaim for its concert and opera performances throughout North America, Europe, South America and Asia. This year the group is joined by violin soloist and Scottish rising star Benedetti, whose highly personal interpretations of Vivaldi’s work have been called “teasingly wistful one minute, electrifying and explosive the next” (The Scotsman).  There are few pieces of music as instantly recognizable as “Four Seasons.” And yet, as it is so often heard only in fragments, the complete piece still has the capacity to surprise and delight.

Committed to the rediscovery of 17th- and 18th-century masterpieces, under Marcon’s leadership the orchestra has given the modern-day premieres of Francesco Cavalli’s “L’Orione,” and Vivaldi’s “Atenaide” and “Andromeda liberata,” among many others. With Teatro La Fenice in Venice, the orchestra has staged Cimarosa’s “L’Olimpiade,” Handel’s “Siroe” and Galuppi’s “L’Olimpiade,” and reprised “Siroe” at the Brooklyn Academy of Music in New York in its first full staging in the United States. The orchestra has been seen worldwide through several television specials, including films by the BBC, ARTE, NTR (Netherlands), and NHK. Highlights of these past two seasons have included concerts with mandolinist Avi Avital in Italy, Croatia, Germany, Spain, France, Mexico, and a 12-concert tour of the United States and Canada.

Highly unusual for a Baroque ensemble, the VBO premiered Philip Glass’s violin concerto “The American Four Seasons.” With violinist Robert McDuffie, the orchestra appeared in 28 cities across the continent in 2010.  The orchestra’s latest recording, featuring Avi Avital in Vivaldi concertos, was released by Deutsche Grammophon.

Benedetti is one of the most sought after violinists of her generation. Her ability to captivate audiences with her innate musicianship and dynamic presence, coupled with her wide appeal as a high profile advocate for classical music, has made her one of the most influential classical artists of today.  Born in Scotland of Italian heritage, Nicola began violin lessons at the age of five with Brenda Smith.  In 1997, she entered the Yehudi Menuhin School, where she studied with Natasha Boyarskaya. Upon leaving, she continued her studies with Maciej Rakowski and then Pavel Vernikov, and continues to work with multiple acclaimed teachers and performers. Nicola plays the Gariel Stradivarius (1717), courtesy of Jonathan Moulds.

Fiercely committed to music education and to developing young talent, Benedetti has formed associations with education establishments including schools, music colleges and local authorities.  In 2010, she became Sistema Scotland’s official musical “Big Sister” for the Big Noise project; a music initiative partnered with Venezuela’s El Sistema (Fundación Musical Simón Bolívar).  In addition, Benedetti recently developed her own education and outreach initiative entitled The Benedetti Sessions. Established in March 2013 at Glasgow’s City Halls, these sessions give hundreds of aspiring young string players the opportunity to rehearse, undertake and observe masterclasses culminating in a performance alongside Nicola.  She has also presented The Benedetti Sessions at the Royal Albert Hall and Cheltenham Festival and has plans to develop this exciting initiative on an international scale.

The Norton Center program will include the following works:  Galuppi’s Concerto a Quattro No. 2 in G Major; Avison’s Concerto Grosso No. 8 in E Minor, after D. Scarlatti; Geminiani’s Concerto Grosso for strings in D Minor, “La Follia;” Vivaldi’s Concerto in D Major for violin, strings and basso continuo, RV 212a, “Per la solennità della S. lingua di S. Antonio in Padua;” and “The Four Seasons.”

The Venice Baroque Orchestra will