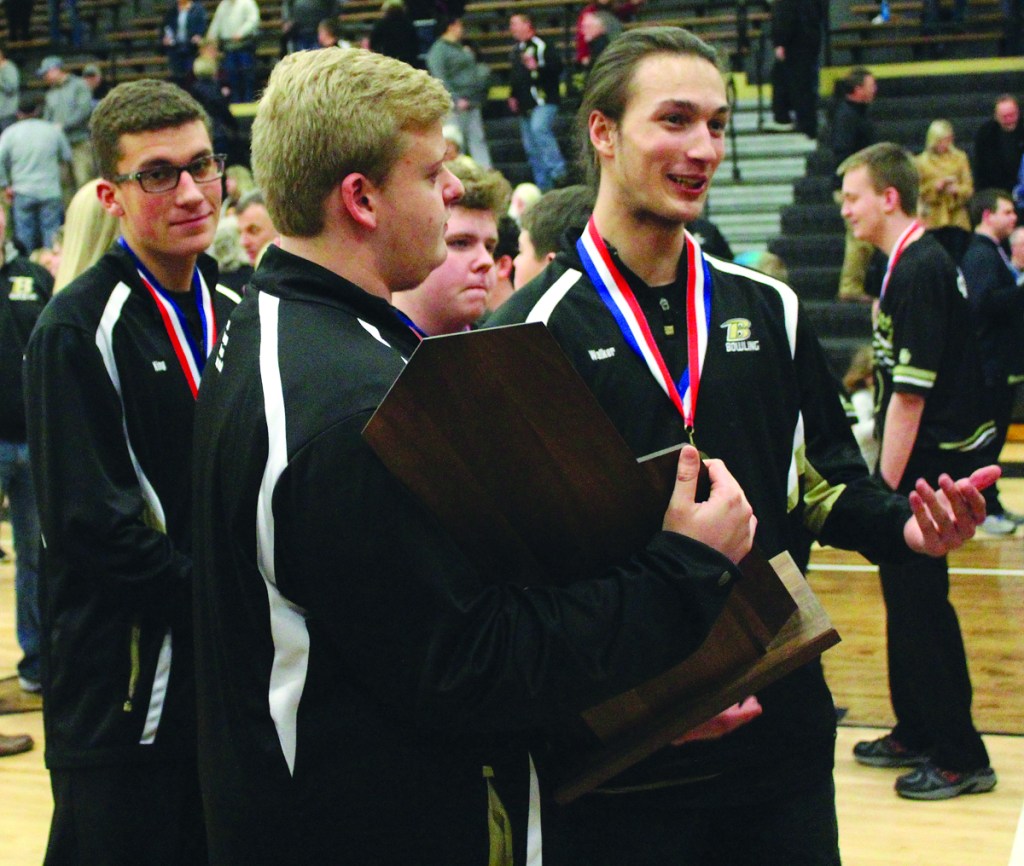 Four years ago, Zach Cooley was working the hallways at Boyle County just trying to fill out a bowling team for Rebels.

But Cooley found some of the best pieces he could hope for, bowlers who would set the standard and raise the bar, and Friday at Eastland Lanes in Lexington, the Rebels hoisted their first state championship trophy after winning the boys state team title.

While the title wasn’t wholly unexpected — Boyle came into the team tournament as the No. 1 seed, after all — Cooley pointed out how much can happen during a high school bowling tournament.

“Did I expect this to happen? No. But did I think it was something that could happen? Absolutely,” Cooley said. “… I told people all year, I like my team. I’m not trying to pump them up, trying to be cocky, but I would take my team against anybody. I tell them all the time, ‘I’m ready to go to war, and I’m going to take every one of you with me.’”

That state title came one day after senior Cameron Walker capped off his career with another individual state runner-up finish; he had previously finished as a state finalist as a freshman. Walker has also won the Region 8 singles title in three of his four years.

“I knew in the back of my mind I had a kid who is an absolute stud at the game of bowling,” Cooley said.

Cooley graduated from Boyle in 2004 and was a member of four straight football state championship teams, but he grew up around bowling — his family runs Bowlarama Lanes in Danville.

So when the KHSAA adopted bowling as an activity six years ago, Cooley had a front seat to the type of talent Boyle could field on a team.

“When I saw high school bowling growing as a whole and my family owning the bowling center in Danville and I saw kids with the ability here, I thought there was no reason we shouldn’t have a team,” Cooley said. “I knew we had several kids who were more than capable of competing a top-notch level.”

It’s been a quick four years for the Rebels, who’ve won the Region 8 boys title in three straight seasons. In the previous two trips to the state tournament, however, they’ve won one match in the bracket, in 2015. This time through, they swept their first three matches.

“The fact that we’ve done it in only the fourth year we’ve had a bowling program, I can’t even put it into words,” Cooley said. “I had the fortune to win a couple of state titles when I was in high school and the feeling I have now is so much more because I knew what it felt like, but now that I know a younger generation gets to feel the pinnacle of high school sports is unbelievable.”

This state title didn’t just happen this year. Cooley said this accomplishment rests on the shoulders of the bowlers who have come and gone before this year, bowlers like Addison Coffey, who was on the first two teams as a junior and senior.

And it’s been bowlers like Coffey and Walker who have demonstrated what is expected from the team and how they go about their business. Cooley said high school bowlers can be emotional and loud, but not Walker and Coffey.

“They let their game do the talking. They don’t scream and yell, do all sorts of chants,” Cooley said. “I really like the way Addison set the bar a few years back, and now Cameron has been a part of it for four years. Even though Addison Coffey doesn’t have a ring on his finger, it takes kids like him that laid the foundation for the direction this team is in now.”

While Walker led from his senior spot, the Rebels relied heavily upon younger bowlers as well, including two eighth graders Cooley pointed out, Jarman and Osborne.

Now with the success of the bowling program, Cooley isn’t the one searching out the talented youth bowlers — they’re coming to him.

“I’m seeing it at a way younger age that kids want to get involved because they want to grow up and be a bowler at Boyle County,” Cooley said.

“I used to have to go to kids but now I’ve got kids who come to me and say, ‘Hey, you’re the bowling coach at Boyle County. I want to be on the team.’ Before I had to go to them and let them know what’s going on.”

No more working the hallways now.

The Boyle County boys basketball team had just wrapped up a 21-point win over Kentucky Country Day, a perfect excuse for anyone in the stands to make an early exit.

But it didn’t happen.

After the Rebels wrapped up their win, the school welcomed home their newest state championship team, the boys bowling team. Earlier in the day, the Rebels had beaten South Warren to claim the fourth-year program’s first state title.

And according to coach Zach Cooley, it was something he won’t forget.

“That was one of the coolest thing that I’ve ever experienced, just seeing the looks in our kids’ eyes when they looked up in the crowd,” said Cooley, who was a member of four straight state championship football teams for the Rebels.

“There was a basketball game that just ended, a 20-point game, basically a runaway game, and those people stayed in their seats to show appreciation to our kids. That was unbelievable.”