Residents order ‘No matter where you are from…’ signs to express support to immigrants, others 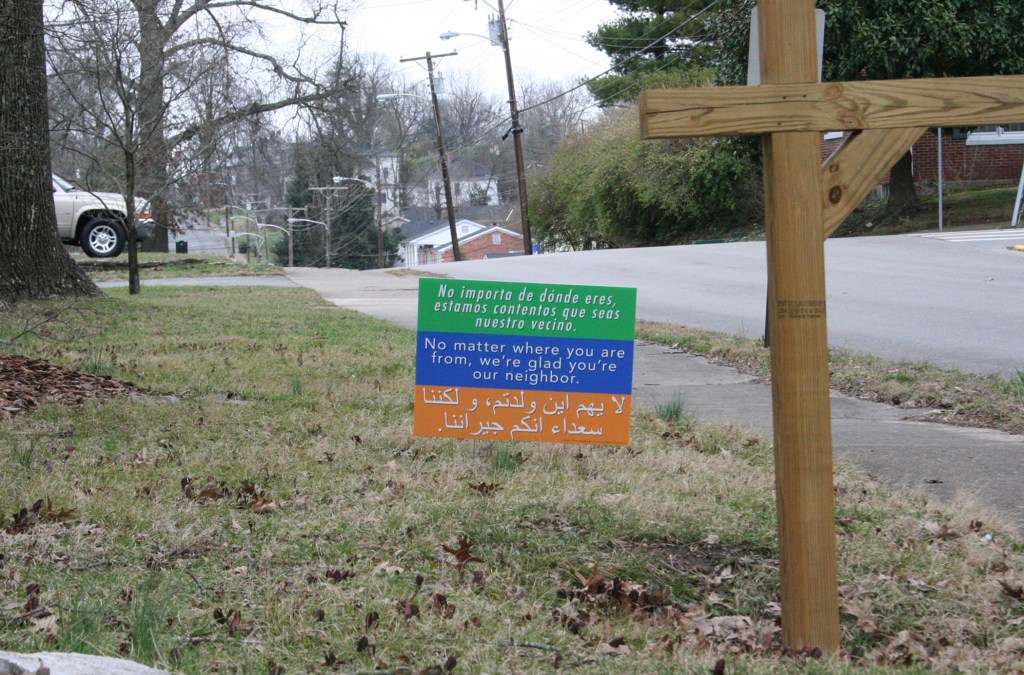 Kendra Peek/kendra.peek@amnews.com Signs are popping up in lawns around Boyle County welcoming people to the county in Arabic, English and Spanish.

All around Danville, colorful signs are popping up with the simple phrase “No matter where you are from, we’re glad you’re our neighbor” in Arabic, English and Spanish.

“This message of welcome is universal,” said Maggie Shapiro Haskett.

Haskett heard about the signs through a friend on Facebook. The signs started at Immanuel Mennonite Church in Harrisonburg, Virginia. Matthew Bucher, the pastor of the church, erected a large, hand-painted version of the sign at the church in response to rhetoric he heard coming out of the presidential election.

The three-color yard sign was created, and the PDF has been shared online, so that others can order their own signs to be printed.

Haskett, disheartened by the current political tone, the Muslim ban and travel ban, loved the signs. Inspired, she took to Facebook seeking out others who might want their own sign. She found a local printer willing to print at least 10 signs at $12 each.

She does orders of 10 at a time; so far, 50 signs have been made and sold. She is currently collecting more orders.

“People like it … It’s an easy and public way to put kindness out there,” Haskett said.

“I like that the signs re not explicitly political,” Snyder said. “Welcoming people who have resettled here should cross all boundaries.”

Snyder said she has used it as a conversation starter to talk to her children about the point of the signs, and about other languages and cultures, such as Syria.

“It was an acceptable starting point for those conversations,” Snyder said.

Her children even asked why the languages were chosen and why sign language wasn’t included.

Snyder said she explained that, in large part, people relocating at the present moment, Arabic and Spanish are two of the large non-English languages in the country now. As for sign language, she said she wasn’t sure what answer to give, but that she was glad her children were recognizing the languages.

They’ve turned the “sign spotting” into a bit of a game, watching for the tricolor signs throughout Danville.

Snyder said the credit locally goes to Haskett, calling her the “lightening rod.”

Haskett said she just hopes it makes a difference.

“I’m hopeful this will be a catalyst to find common ground,” she said.

Haskett, who is Jewish, has friends who are Muslim and expressed to her how they appreciate the signs and are excited about them. She said that her own lineage impacted her in bringing the signs in.

“My grandparents came here fleeing persecution. That’s why I’m here. It feels important to my part of the community to stand up and extend the hand of welcome,” Haskett said.

Citing Leviticus 19:33-34, Haskett said it’s important to her faith and others to extend the welcome, “When a foreigner resides among you in your land, do not mistreat them.  The foreigner residing among you must be treated as your native-born. Love them as yourself, for you were foreigners in Egypt.”

“This message of welcome is universal,” Haskett said. “My hope is this is something we can all agree on — to be welcoming.”

The yard signs cost $12 each and can be ordered by emailing welcomeindanville@gmail.com. Any extra money will be donated to the Kentucky Refugee Ministry and the ACLU.