Theater could be costly for Boyle schools 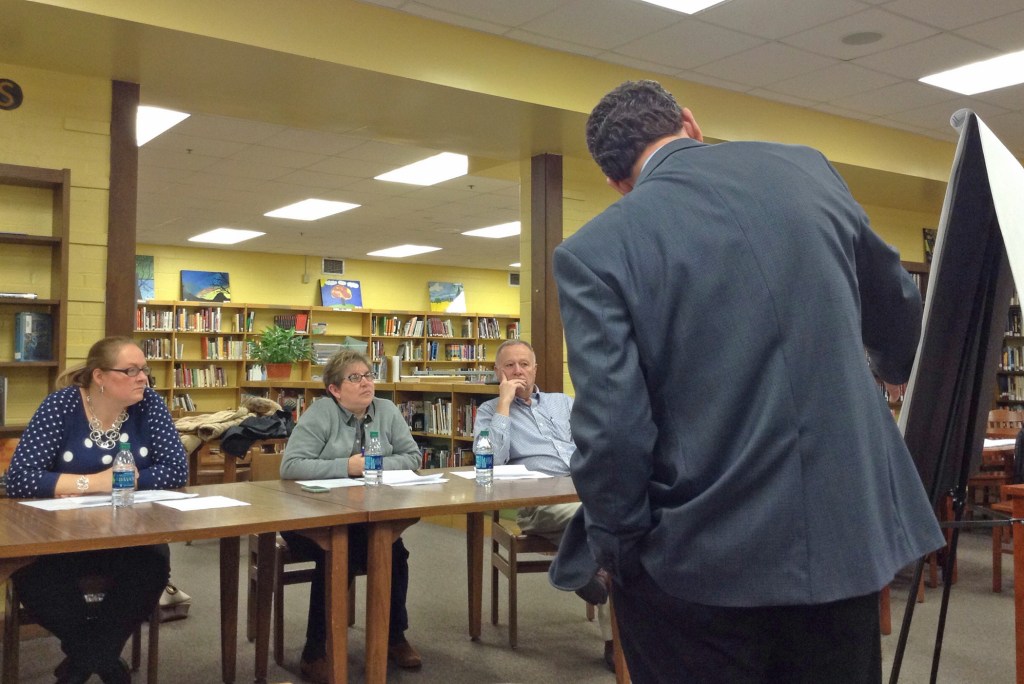 Kendra Peek/kendra.peek@amnews.com Tony Thomas, architect with Klotfelter Samokar, speaks to the Boyle County Board of Education regarding changes to the plan.

Discussion continued about the fate of the theater in the future Boyle County Middle School during Monday night’s working session of the Boyle County Board of Education.

Superintendent Mike LaFavers told board members that the Local Planning Committee will need to be reconvened soon so that the District Facilities Plan can be reworked to take the theater off of the high school, where it is currently listed on the plan.

Beyond that, the theater project may have to be separated from the middle school on paper, submitting it on its own to the Kentucky Department of Education, as the state standards for middle schools do not include theaters.

Tony Thomas, architect with Klotfelter Samokar, said it might be possible to bid the projects together.

“That piece we don’t know yet, because KDE hasn’t said yet if they are going to let us bid it as one,” said LaFavers. Thomas said he thought they would allow that.

However, waiting to bid the projects together could delay everything beyond the December opening dates previously hoped for, LaFavers said.

“The 105,000 square foot middle school could be done by December,” Thomas said.

“The community theatre might not be possible,” said LaFavers. “Right now, as things are positioned, I’d say it’s a likelihood we could pull (the middle one) off.”

“I think the $37.3 million is more of a pipe dream,” said board member Jesse Johnson. “I just don’t want it incomplete.”

Thomas said the theater is currently listed as an alternate on the plan, with intention to continue working on it once the board decides what they are comfortable with building. There are two or three designs of the theater in the beginning stages, he said, waiting on future directions.

“We are moving forward with the rest of the building,” Thomas said.

LaFavers said the district should have the idea for the theater ready by the March working session.

Thompson also said that Klotfelter Samokar is working on the design development in many spaces, but none are ready to present as 100 percent finished. Approving those will be the next step.

The board gave verbal agreement to Thomas swap one Spanish classroom with the FMD room in the new design, placing the two Spanish classrooms beside each other, with a possible folding wall, to allow for collaboration.