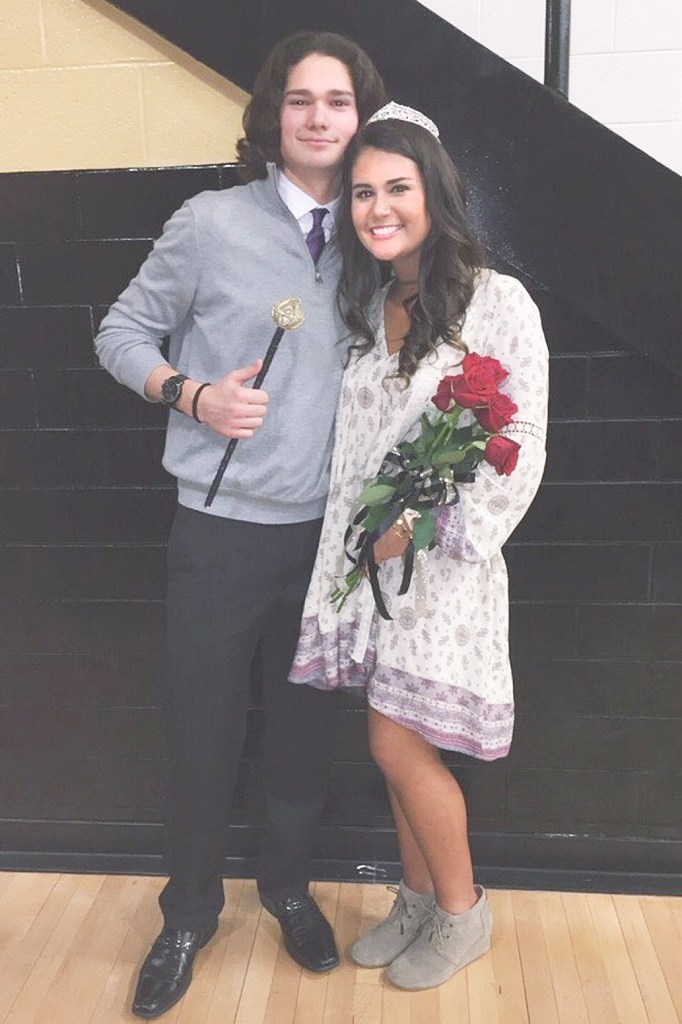 Hotchkiss and VanSteenlandt are crowned queen and king

On January 27th, the 2017 basketball homecoming court was presented at halftime of the boys game during a boy/girl doubleheader with Lincoln County. The court was elected by the student body as proud representatives of the senior class.

At halftime, members of the homecoming court were introduced and escorted onto the floor in anticipation of the voting results. Abbey Hotchkiss and Adrien VanSteenlandt were named our Basketball Homecoming Queen and King.

“I am honored to be the 2017 homecoming queen. When I came to Boyle last year, I felt so welcomed and now Boyle County will be my family forever,” stated Hotchkiss. 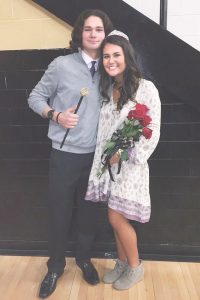 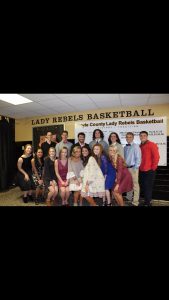 After ten years of being home schooled, Will Imfeld began contemplating a different path for the remainder of his high school education. Academically, he was excelling in this environment, but socially and athletically, he was interested in taking a leap forward. 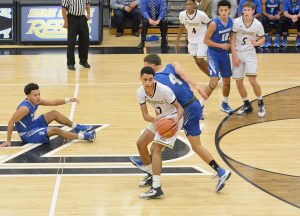 Photo by yearbook staff
Imfeld is enjoying his first year of Rebel basketball, especially getting to know his new teammates.

Imfeld decided to explore the public school setting once he had considered his options. Because he already knew several BCHS students and enjoyed watching the basketball team, as he was a player himself, he decided to visit the school in the spring of 2016.

“I liked what I saw in the classes and the people.” From that visit, Imfeld was eager to create more friendships and further his education at Boyle County.

Following his decision to attend public school, he continued to hear negative comments regarding this type of education. “I really didn’t know [what to expect], that’s one of the reasons I came here, because I wanted the experience. However, it’s pretty much met my expectations, without the ‘bad’ people though.”

On his first day of public school, he was reunited with several old friends but also began new friendships with classmates. He is adapting pretty well, and one of his new friends, Benjamin Hatfield, even claimed, “He is my hero.”

As for his new social structure, he is maintaining his strong religious values while influencing others by his example. Imfeld is very kind and generous towards others throughout the school. Another new friend, Cameron Guinn, summarized him as being “one of the coolest guys I know. He is generous, funny, and just an all-around kind-hearted person.”

Even though the academic and social transition has been smooth, other challenges have presented themselves. “Basketball wise, it was kind of difficult because it’s a different level of competition with different people. School wise, it’s been pretty easy with similar education levels. I just think the schedule for public schools is a lot more rigorous, but it’s been okay.”

The rigor of a long basketball season has been quite challenging, but his hard work is paying off as he has become a starter for the varsity basketball team. With the Rebel Rowdies’ (student pep section) crazy chants and Coach Steve Adams’ booming voice, Imfeld loves playing his heart out and dedicating his time for his team. 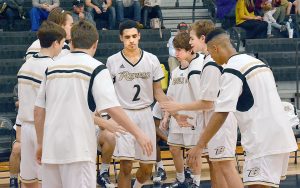 Photo by yearbook staff
Imfeld prepares himself mentally as game starters are introduced.

Rebel Pride has certainly taken over, but Imfeld cannot point to one particular moment where he first felt the passion. “There’s not just one moment, it’s been an accumulation of stuff, like getting to know people and getting closer to the guys on the basketball team. My favorite experience has to be one of two things. I liked when we beat Mercer, that was fantastic, and Homecoming was pretty fun as well.”

Now with just a few more months left in his initial school year, Imfeld’s views on public schooling are opposite of those that he had once heard. He does not think it is ‘bad’ and neither are the people, as others implied.

As of now, Will plans to continue his education at Boyle County High School for his last two years before college. “I look forward to beating more teams like Mercer, succeeding in sports, and being a witness for my God.” Imfeld is an asset to the Boyle County family and his fellow Rebels are excited to have him.

Today, mainstream personalities seem to dominate the social world. Young people, especially, aspire to be popular and to “fit in.”

However, senior Erin Kidd has no problem defying these norms. Kidd is the ideal example of a young individual that is comfortable with being herself. As an emboldened individual, Kidd’s confidence is radiant and her expression of art is powerful. 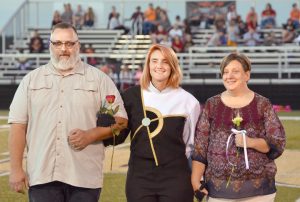 Photo by yearbook staff
Erin Kidd is introduced during the marching band’s senior night, accompanied by her parents.

Grounded in an introspective manner, Kidd lives and sees the beauty in the moment. She maintains an outer sense of serenity that reflects her inner peacefulness. The development of her personality is expressed through her many artistic talents. Her passions for painting, reading, and playing music display her creativity and desire for individuality.

Fellow senior Caroline Wells is a close friend to Kidd. “She is a very creative individual and is one of the greatest friends that you could ask for. She’s an independent thinker, and a good people person. She’s very well-rounded in her artistic capabilities.”

Kidd has grown to see the true value of art throughout her time in high school, and she has enjoyed witnessing the adaptation of the art world and the development of the hipster culture. “When we were kids, the art world, music and literature, was dying because so many people were worried about school and athletics. But I think nowadays, because so many people are trying to be ‘cool,’ people have gone back to being crafty.”

Today, the incredible amount of resources online expose people to a variety of artistic opportunities and skills. “People are being paid to make art, and I feel like you see it more now. There is a bigger spread in art and fine arts just because the times are different.”

The art world from Kidd’s perspective is continually transforming. Music, for example, manifests itself into a variety of forms, shapes, and experiences. “In everyday sounds, you hear something and find it so amazing that things like that can happen. I think it’s in everything that there is: birds, car horns, and people talking. You can find beauty in anything.”

“Other music (written) and the people making the music you hear, makes the experience real. If you can make music, you understand the hardships, practice, and skills it takes. It’s interesting to see how you can put things together and they sound so beautiful. People listen to music all the time, that’s what makes it so important. Without it, life would be dull.”

Even Kidd’s conversations with her peers helps to provide them with a poetic calm to an otherwise chaotic atmosphere. In her perspective, there lies a deeper beauty beyond the surface of simple appearances. 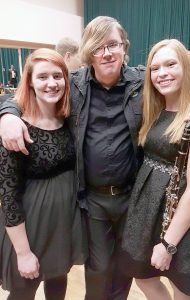 “It’s just a nice escape from things that are happening. Sometimes life is boring so you read something really exciting.”

“I like to talk a lot about my favorite books because it’s nice to not deal with your own problems and take a break from reality by reading something more interesting or less hurtful than how you’re feeling in the real world. It’s nice to read about someone else so you don’t necessarily have to worry about you.”

Serving as the co-president of the BCHS Book Club, Kidd understands the importance of literacy and its significant impact on career professionalism and social growth.

“One, if you go on to higher education or directly into the workforce, you want to sound intelligent. Reading not only increases your IQ, but a lot of the time people reference things in books that you can’t understand unless you’ve read about it. You miss out on things in life if you never read.”

Kidd embodies an outgoing individual dedicated to her strong artistic values and inspirational skills. With her extraordinary individuality and expressive character, there is no doubt that Kidd will forever impact the world in many positive ways.